Soldiers, Sultans, Missionaries, and Renewers in the Islamic World

Christian Mauder, Associate Professor in the Study of Religions with Specialization in Islam, and a specialist in the dynamic history of the world of Islam.

Christian Mauder is an intellectual, religious, and social historian of the Islamic world, with a focus on the late middle and early modern periods (ca. 1000–1800 CE). He studied Arabic and Islamic Studies, Religious Studies, Sociology, Persian Studies, and Economics at the University of Göttingen, and spent time in Cairo and at the University of Marburg improving his Arabic and Ottoman Turkish.

- I have always been interested in languages, and as a student, I was privileged to have the opportunity to learn multiple Middle Eastern languages and to immerse myself in several disciplines of the humanities and the social sciences that proved helpful for explaining the complexities of human societies, both past and present. Since that time, I have done my best to combine my philological expertise with the application of current theoretical and methodological insights in my work.

Christian Mauder completed his MA degree with a statistical analysis of several hundred Arabic biographies of members of the military elite of the so-called Mamluk Sultanate, which ruled central parts of the Middle East between 1250 and 1517 CE. In his analysis, which has been published as a monograph, he showed that a significant share of Mamluk soldiers and officers were deeply involved in various disciplines of nonmilitary, especially religious, learning.

- Earlier scholarship depicted these military men as unlettered semibarbarians who cared little about the culture and the religion of the societies they governed. My work revealed that such stereotypical representations are not only highly problematic and erroneous, but actually tell us more about the people on whose writings they are based than about the social and intellectual dynamics of the premodern Islamic world.

In his doctoral work, Christian Mauder relied on little-studied sources to examine the court of the Mamluk Sultanate in Cairo as a transregionally interconnected center of dynamic intellectual exchange, theological debate, and performance of rule which triggered novel developments in Islamic scholarly, religious, and political culture. A revised version of his dissertation, which won the 2018 Malcolm H. Kerr Dissertation Award (Humanities) of the Middle East Studies Association of North America and the 2018 Christian Gottlob Heyne Award of the University of Göttingen, has been published by Brill under the title In the Sultan’s Salon: Learning, Religion and Rulership at the Mamluk Court of Qāniṣawh al-Ghawrī (r. 1501–1516). During his years as a doctoral student, he was fortunate to spend time at Yale University as a Visiting Assistant in Research and to be a part of the Holberg Seminar on Islamic History based at Princeton University.

- What I found most exciting about my doctoral work was that I got to read and analyze many manuscripts in Arabic and other languages that very few people seem to have even looked at over the past 500 years. These manuscripts provide deep insights into a highly sophisticated court culture that is completely irreconcilable with the generally accepted narrative of a broad cultural decline of the Islamic world during the late middle period which has dominated scholarship for centuries.

After defending his dissertation at Göttingen in 2017, Christian Mauder completed postdoctoral appointments at the University of Bonn, New York University Abu Dhabi, the Institute for Advanced Study in Princeton, and Yale University, where he received advanced training in university pedagogics.

- I am very grateful for having had the opportunity to get to know different academic cultures and pedagogical approaches. In my work at UiB, my goal is to apply the best of what I have learned at these other instiutions. I am particularly interested in creating classroom experiences for my students which allow them to engage actively with the religions and cultures they are studying.

Christian Mauder’s current research examines the role of the concept of the “renewer” (mujaddid) in Islamic religious and political history of the late middle and early modern periods. By applying the theoretical framework of transregional historical semantics, the present project analyzes how, during the 14th to 18th centuries, the notion of the renewer became one of the central concepts Muslims throughout the Islamic world used to discuss questions of political power, religious authority, and scholarly status.

- My project examines one of the most understudied key concepts of Islamic political and religious thought during the later periods of Islamic history. I hope to demonstrate the value of employing the approach of transregional historical semantics to the study of the Islamic world and above all to highlight the transregional interconnectedness of premodern and early modern Muslim communities.

Christian Mauder is continuing his research on the Mamluk period at the University of Bergen as an affiliated member in the project CanCode: Canonization and Codification of Islamic Legal Texts. Moreover, he is working on the history of interactions between the Islamic world and Europe with a focus on the Moravian Brethren, a Protestant community that undertook mission projects in Egypt during the 18th century. He is furthermore involved in studying the history of the reception and translation of the Quran; the formation, maintenance, and failure of states in the Islamic world before 1800; and Islamic eschatological thought.

- I am looking forward to contributing further to the study of Islam and the Islamic world at UiB, and I am excited to collaborate with colleagues from AHKR, the Department of Foreign Languages, and other contexts within UiB and beyond. 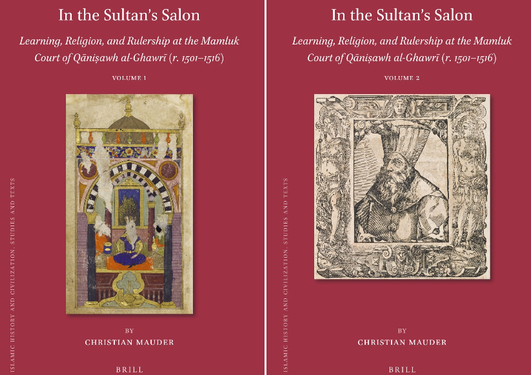 In the Sultan’s Salon

The book "In the Sultan’s Salon: Learning, Religion, and Rulership at the Mamluk Court of Qāniṣawh al-Ghawrī (r. 1501–1516)" presents the first study of an Islamic court of Egypt as a centre of scholarship, religion, and politics.