PhD candidate Gedef Firew Abawa is searching for the origins of agriculture in Northwest Ethiopia.

Gedef Firew Abawa from Ethiopia started his PhD in archaeology at the Department for Archaeology, History, Culture and Religion Studies in August of 2010. The focus of his project is origins of agriculture in the Upper Blue Nile river basin of northwestern Ethiopia.

– The aim is to discover archaeological evidence related to the transition to agriculture in the region. Scholars have long debated whether the roots of agriculture are local or external, and that is something I find interesting.

In favor of a local beginning there are the diverse physiographic features, the distinctive food ways and cultural traditions in addition to widespread distribution and use of indigenous crops. Northwestern Ethiopia is located between the Nile Valley and routes between the Red Sea and the Indian Ocean, so the role of external influence should not be overlooked, according Firew.

– These water bodies have been the most important crossroad for the movement of people and the spread of domesticates for several millennia. Though little work has been done, and especially in the source area of the Blue Nile, the region has been proposed as an independent center of plant cultivation and domestication.

Data and the value of education

Firew uses archaeological, ethnographic and historical data in his project, and he depends on archeological materials he excavated in 2011. Some of the most vital sources are lithic, pottery, grinding stones, botanical and faunal remains, and also diet analysis and C-14 dating.

– The academic training during my master’s degree and PhD has offered me valuable ground to this project because my background in practical archaeological field work was limited. The theoretical approaches I gained in Bergen also have a paramount contribution to my work and future career.

The Quota Scheme and expensive excavations

Firew has a bachelor degree in history from Bahir Dar University and a master’s degree in Archaeology from Addis Ababa University. Before starting his PhD in 2010, he got a master's in archaeology at the University of Bergen. Firew’s project is financed through the Quota Scheme, a funding scheme offered by the Norwegian government to students from developing countries amongst others.

– A PhD in archaeology requires extensive field work, and being financed through the Quota Scheme makes it hard to acquire the funding needed for excavations and laboratory processing, which is expensive. Luckily I have received a project grant from the Meltzer foundation that helped me a lot to get the basic data.

One objective of the Quota Scheme is to provide relevant education that will benefit the students' home countries when they return. When completing his project and PhD in January 2014, Firew wishes to travel back to Ethiopia to teach and continue his research.

– My long term plan is to open an archaeology department Bahir Dar University and develop archaeological field schools and projects. 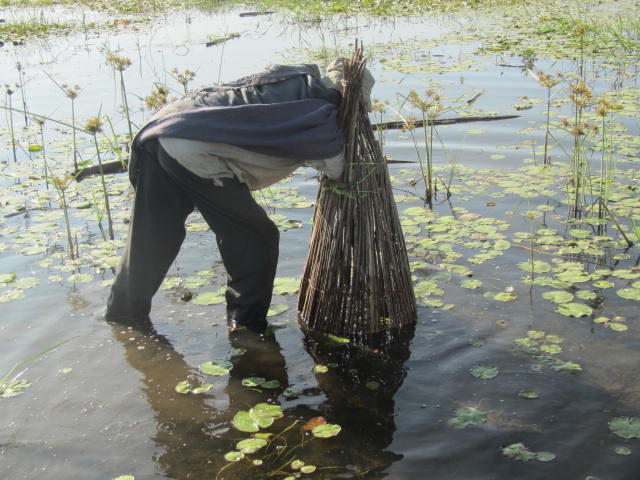 A farmer with traditional fishing hive at the egde of lake Tana very close to Firew's excavation site. The farmer demonstrates how you can catch fish with this equipment.