The event will include a guest lecture by Søren Pold, co-author of The Metainterface: The Art of Platforms, Cities, and Clouds (MIT Press, 2018) and short 5-8 minute ‘lightening talks’ from network members.

My talk will present the meta interface as a contemporary interface paradigm in a time where the interface seems to have perception, and become global (an abstract spatiality, everywhere, or "in the cloud") and generalized (in everything - sealed off in anything we may encounter. This meta-interface is the foundation of a culture industry that fits in our pockets. Participation and sharing have become a business model of centralized platforms, which are also territorial, affecting how we see and use urban space, and global in their ways of reorganizing sense perception through datafication and clouds. However, given the meta-interface we see new art practices that question the material conditions of the meta-interface, and point to alternative ways of construction and design.

Besides cartographic mapping of traffic and people, we also see more direct relation to - and control of - literacy, reading and writing. Aarseth's cybertextual machine (Aarseth 1997, 21) is today thoroughly networked and centralized in cloud-based platforms and the reading behavior of the human operator is not just relevant as individual interaction, but produces content and data for the platform that is used for profiling and matched in networks to other similar platforms. In this sense, cyber texts are integrated into larger meta-interface industries that share behavioral data, profiles and marketing. Wendy Chun has compared current readers to "characters in a drama putatively called Big Data" (Chun 2016, 94), which has to register and profile people according to choices, relations and taste. In short, measuring and modeling affective relations becomes a central business model of a cultural metainterface industry. We never escape our avatar profile.

Through the discussion of works of art and electronic literature by eg Scott Rettberg and Rod Coover, Daniel Howe, Winnie Soon, Erica Scourti and Talan Memmott, I will argue, how narrative, focalisation and author-reader implications become important dimensions for critical analysis and design in meta interfaces. These projects point to how literature potentially becomes sites of critical reflection of the way reading writing is encased in a big data drama. In this way, they point towards redesigning and rewriting the metainterface character.

Bio: Søren Bro Pold (Aarhus University) has published on digital and media aesthetics - from the 19th century to the interface in its different forms, eg on electronic literature, net art, software art, creative software, urban and mobile interfaces, activism , surveillance culture and digital culture. His main research field is interface criticism which discusses the role and the development of the interface for art, literature, aesthetics, culture and IT. Together with Christian Ulrik Andersen he edited the anthology "Interface Criticism" (2011) and "The Metainterface - The Art of Platforms, Cities and Clouds" (2018). http://pure.au.dk/portal/en/pold@cavi.au.dk 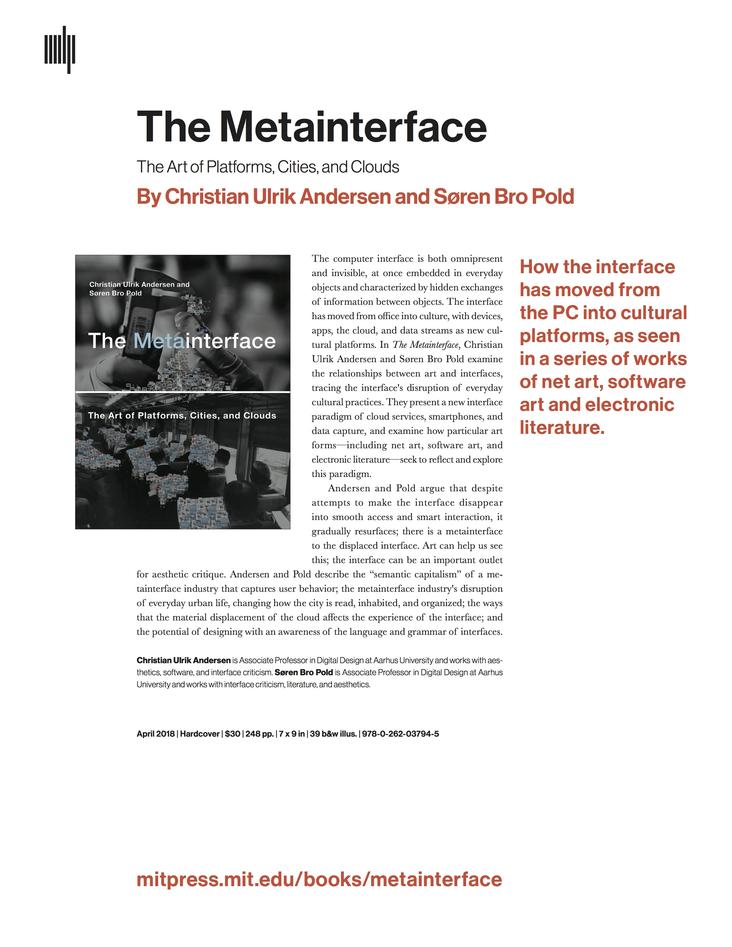 Flyer for The Metainterface – The Art of Platforms, Cities and Clouds (2018)
Foto/ill.:
Søren Bro Pold and Christian Ulrik Andersen