Visual artist Ellen Karin Mæhlum writes that “Art and science often begin with visual observations followed by mental adaptation and subsequent interpretation. My aim was to make visible something that is normally both invisible and inaccessible. One of the things that interested me was what happens to the motif when the original photographs taken under the microscope are enlarged, adapted and reproduced using a printmaking process.”

Mæhlum's work is part of a growing trend where, in recent years as more emphasis has been placed on outreach activities, there have been an increasing number of stimulating encounters between artists of various kinds and researchers. This trend has yielded such interesting and powerful results that it was the focus of a recent large, international conference, Euroscience Open Forum conference held in Barcelona 20 July, 2008: Art - a gateway into science . The Research Council of Norway was an active participant at the conference and used the MAR-ECO Project and its collaboration with artist Ornulf Opdahl, photographer David Shale and sculptor Anne Berg Edvardsen as successful model of the possible collaborations between artists and scientists.

Last year BIO researchers were involved last year in an art exhibition that was part of Research Week ( Forskningsdagene). It was entitled "Mikrokosmos" - Vitenskapsformidling gjennom kunst. Now BIO researchers are again involved in a collaboration with a visual artist, Ellen Karin Mæhlum.

Mæhlum describes the collaboration: "The underlying theme of this series of prints is the extraordinary, single-celled plankton organisms that are to be found in the waters close to the surface of the ocean. The visual material, upon which these prints are based, consists of photographs and observations made by microbiologists from the Department of biology at the University of Bergen, using light and electronic microscopy. The water samples were taken from the sea around New Ålesund, Svalbard. The initial contact with the group was made in 2007, where they were part of an international research project called PAME (Polar Aquatic Microbial Ecology). The project took place during the International Polar Year 2007 - 2008 . Our collaboration was based upon a common interest and fascination for the patterns and forms that are evident in the microbial, marine universe." 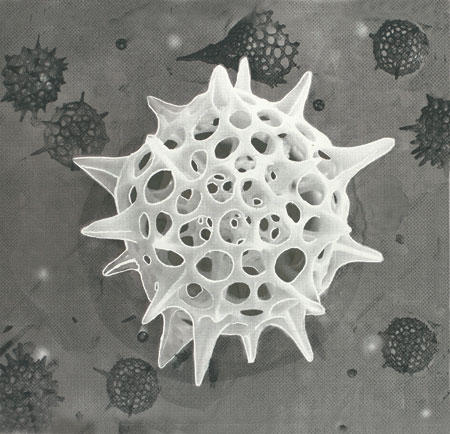