Follow along with nesting oystercatchers on the roof of the Science Building. There is a live webcamera following the action.

Follow along with nesting oystercatchers on the roof of the Science Building. There is a live webcamera following the action here.

The Eurasian Oystercatchers Haematopus ostralegus usually breed on the ground in open areas. The concept of roof-breeding is known from different sites. Aberdeen in Scotland is known for its population of roof-breeding Oystercatchers, counting about 230 pairs in 2004. In other countries the phenomenon is more uncommon, but is recorded (at least) in the Netherlands, Belgium, Finland, Latvia, Germany and Norway.

The Oystercatcher is one out of very few shorebirds that actually feed their young. This is also a condition for successful breeding on roofs up to 30 meters above the ground. In Bergen the adults feed in the parks near the building where they breed, and bring the food for their young. It seems that they mainly deliver Earth-worms Lumbricidae sp. to the chicks. The chicks stay on the roof until they are more or less able to fly.
Roof-breeding in Bergen 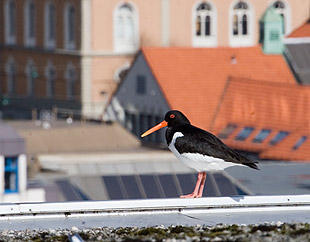