Skip to main content
The Department of Biomedicine
Research Highlights

Without NAA80 the brakes are off

Actin is the most abundant protein in our cells. For cell biologists, actin is important to study because it forms fibres that give the cells shape and the structure that allows them to move.

Researchers from Bergen now found an enzyme that carries out the tiniest – yet critical – modification of actin: It adds a small chemical group to one end of the protein. This is a small change, but it has great impact. Changing the biochemical properties of the protein means also changing the function of actin, the shape of actin fibres in the cells, and their ability to move.

The enzyme in question is called NAA80, and it belongs to the group of N-terminal acetyltransferases, or NATs. Its job is to transfer an acetyl-group onto the N-terminus of another protein. The research group led by Professor Thomas Arnesen focusses on these enzymes, and they found that NAA80 is special.

It is an international trio of post-doctoral researchers from Arnesen’s  group that has combined their efforts to tell this story. Biochemist Adrian Drazic, cell biologist Henriette Aksnes, and microscopy-specialist Michaël Marie had not been searching for what they eventually found. At first they were actually searching for another enzyme, but along the way NAA80 caught their interest and turned out to be a very interesting and valuable side-track.

To study the effect of NAA80 on the cellular actin structures, the team used gene scissors, CRISPR/Cas9, and cut NAA80 out of the genes of the cancer cell line HAP1. An analysis performed together with collaborators at Ghent University in Belgium gave a clear and strong hit. NAA80 is a NAT that has only one target, actin. When cells lack NAA80 then actin does not have the acetyl group at its N-terminus, corroborating that NAA80 is the single enzyme responsible for this processing.

“The processing of actin is quite unique”, explains Adrian Drazic. “Originally, scientist could not quite figure out why this modification was important, and they also didn’t know the enzymes involved. For a long time it was thought that this part of actin is not really that important at all. But now we found that the changes that occur here are in fact important for several things.”

It acts like a break – slowing down cell motility

Henriette Aksnes, who has written her PhD-thesis on other NAT-enzymes, was amazed when she started to look at the NAA80-lacking cells under a microscope: “These cells actually move faster than the other ones.” She saw this in cell-motility assays, a method that measures how quickly cells move in a culture dish. Other methods came to the same conclusion. The NAA80-lacking cells were always faster. The absence of this enzyme that modifies actin caused cells to move faster than normal cells. “This means that that the acetylation of actin acts like a break – slowing down cell motility”, summarizes Aksnes.

“These assays just show that there is something real and important with NAA80 and actin” says Marie. “And when I first started working with these cells it became clear that there were also some structural differences”. The NAA80-lacking cells had much more and longer finger-like protrusions, filopodia. Filopodia are actin-based subcellular structures, important for cell movement and communication. They are very tightly coupled to the underlying actin structures. As Marie puts it: “As soon as you tamper with the cells internal structure you will immediately see an effect. And this was very obvious here”.

Adrian Drazic, the biochemist of the team, visited the lab of Professor Roberto Dominguez at the University of Pennsylvania in Philadelphia to learn state-of-the art methods in the field of actin biology. Using again the NAA80-lacking cells, they purified actin. They then tested the biochemical properties of this special actin-form, and compared it to actin derived from normal cells. “I did these biochemical assays in Philadelphia, and we saw that there were big functional differences. That’s when I realized this was really important”.

He was measuring a very special property of actin, called polymerisation. Actin proteins can stick together and form long strings of proteins, filaments. What the group from the Department of Biomedicine together with the Dominguez lab found was that the little acetyl-tag on the proteins’ end was quite important for this process. When it was lacking, both elongation and depolymerisation were much slower than normal. This means that the filaments were more stable than normal. This enhanced stability is possibly the reason why these cells have a different shape and more filopodia, and it is probably also the reason why cells can move faster.

The findings have raised interest in the international research community. A PhD-candidate, Marianne Goris, was invited to study the structure of NAA80 in the Marmorstein lab at the University of Pennsylvania. This work resulted in another article published in the same issue of the journal PNAS. Professor Arnesen and his research group can therefore decorate themselves with double article in the renowned scientific journal. The two papers are now highlighted in the last edition of PNAS with a commentary. http://www.pnas.org/content/115/17/4314

The icing on the cake is the prestigious consolidator grant from the European Research Council that was recently awarded to Thomas Arnesen, as we reported before. This grant was given so that the group can continue their work with NAA80 and actin, investigating a possible connection with cancer and using other model systems. 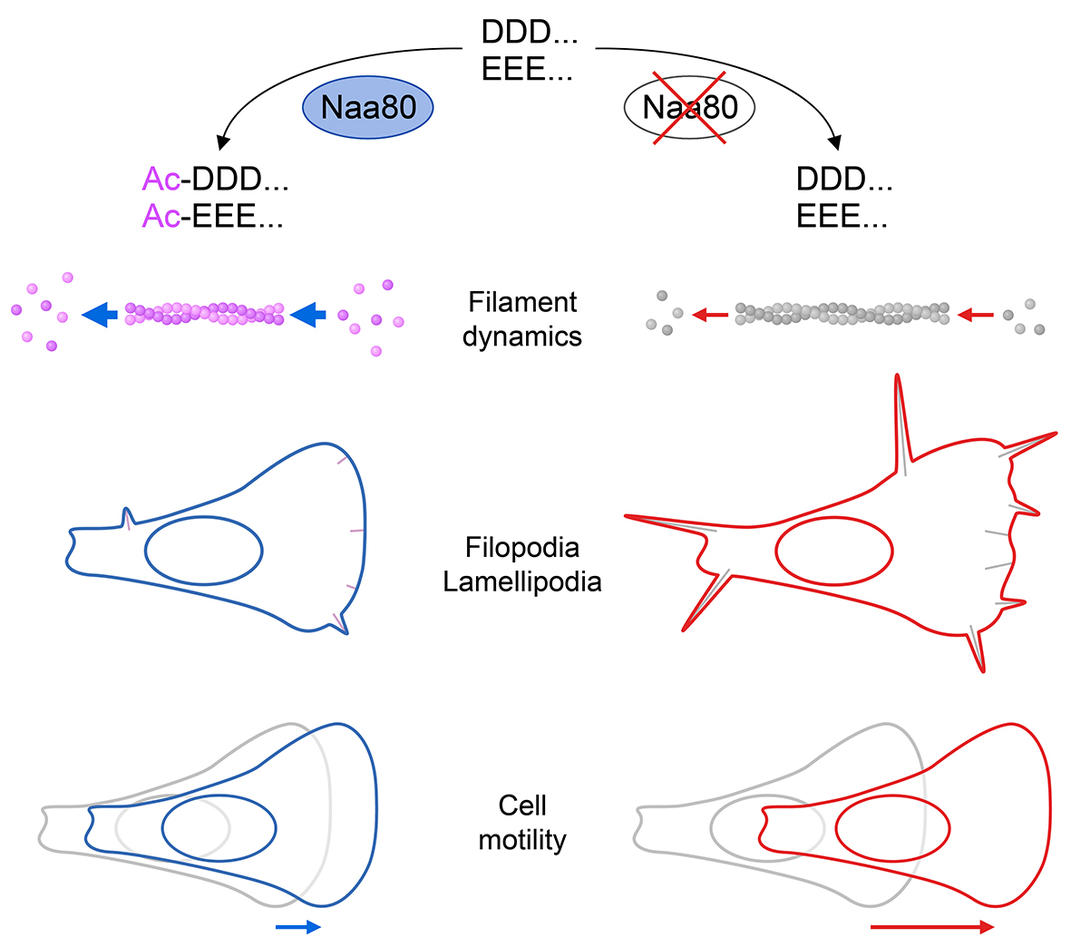 The enzyme NAA80 adds an acetyl group to actin and affects several cellular functions. Left: Usually, the enzyme NAA80 transfers an acetyl group to the N-terminus of actin. Right: When NAA80 is removed, actin is not acetylated. Actin filaments built from this type of actin are less dynamic, the cells have more filopodia and lamellipodia, and have increased motility.
Photo:
Drazic et al. 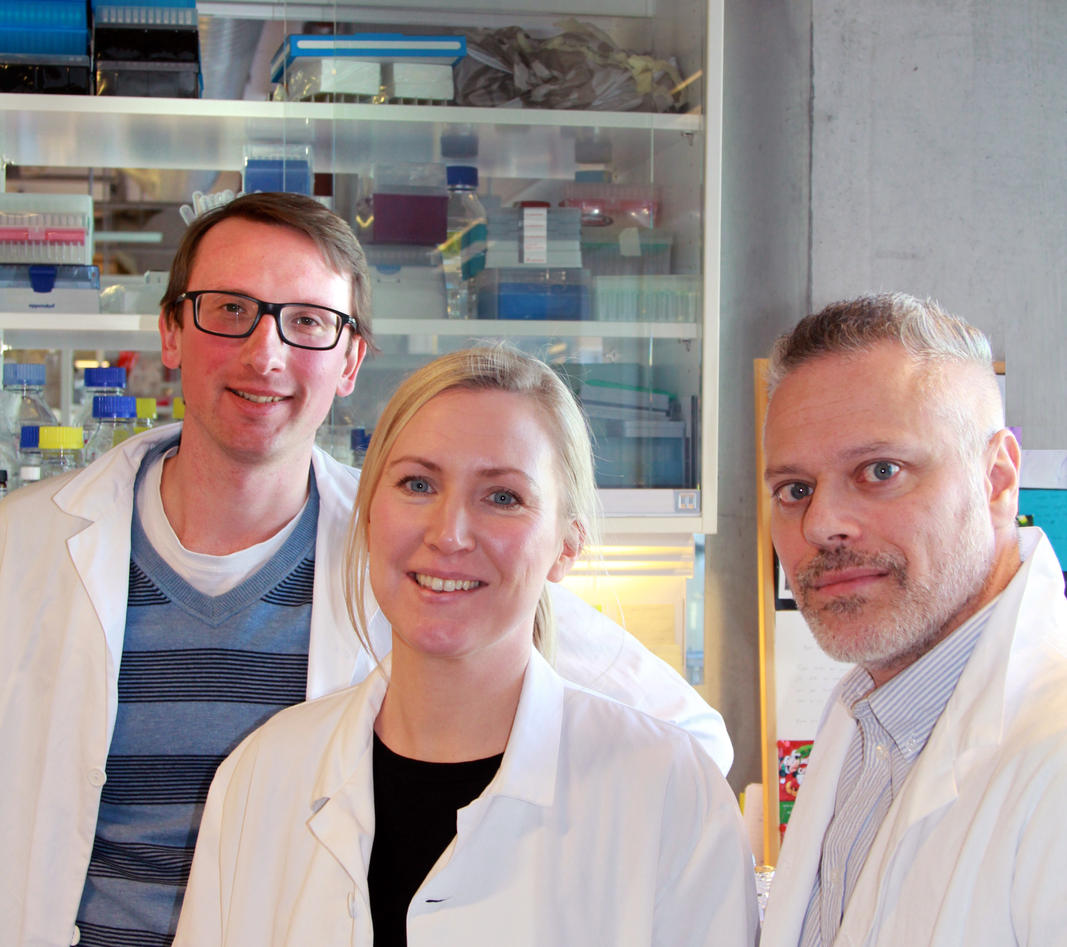