Experimental studies suggest that fibroblasts, macrophages and cells of the tumor vasculature, including perivascular cells, can regulate many aspects of tumor biology including metastatic capacity, immune surveillance and response to treatment. These studies also imply the existence of functionally distinct subsets of these cell types. We have therefore performed multi-parametric analyses of the tumor microenvironment (TME) to explore the biomarker potential of TME cell subsets.

We have found that high platelet-derived growth factor beta receptor (PDGFbetaR) expression is associated with poor prognosis in breast, prostate, ovarian, pancreas and kidney cancer. This association has also been seen in ductal carcinoma in situ (DCIS) of the breast. Interestingly, PDGFalphaR expression shows an inverse association with survival in breast DCIS and pancreas cancer, suggesting that the two markers identify functionally distinct fibroblast-subsets. Analyses of a breast DCIS collection, from a trial exploring benefit of radiation therapy, suggest stromal PDGFbetaR as a novel marker for radiation resistance.

Profiling of perivascular cells in multiple tumor cohorts have demonstrated the existence of marker-defined subsets that are independently expressed and show distinct associations with prognosis. In both kidney and ovarian cancer, high perivascular PDGFbetaR acts as an independent marker of poor prognosis.

Collectively these studies demonstrate clinically relevant inter-case variations in TME cell subset composition in many common tumor types. Findings are stimulating to an even more in-depth profiling of TME subsets to reach the ultimate goal of TME-related biomarkers of clinical utility.

After the seminar, CCBIO is pleased to invite you to a get-together outside the auditorium where pizza and beverages will be served.
Everybody is welcome! 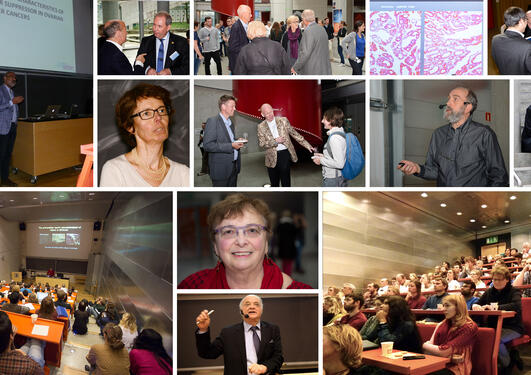