Skip to main content
The Department of Biomedicine
History of Medicine

Few people know the researchers Agnar Nygaard and Kjell Kleppe, but in the 1960s they were part of the world elite that laid the foundation for today's COVID-19 tests. Two permanent exhibitions about the pioneers have now been opened.

Designer Ian Holcroft at Mistrol considers the newly established exhibition to be permanently on display at the High Technology Center.
Photo:
Magnus Vollset

Nygård (1919 - 1979) was the first Head of the Department of Biochemistry at the University of Bergen in 1964, Kleppe (1934 - 1988) was recruited two years later. Together, they built up what was then the largest molecular biological environment in Norway, where research was carried out on gene structure, functions, products and how gene activities are regulated.

Nygaard's most important scientific contribution was the discovery that RNA-DNA hybrids can be captured and studied quantitatively on nitrocellulose filters, a method used in Marshall Nirenberg's Nobel Prize-winning studies of the genetic code (1968). Kleppe discovered the principles of the PCR method that make it possible to make millions of copies of a specific DNA region. In 1993, it was Karry Mullis who won the Nobel Prize in Chemistry for further development of the method, five years after Kleppe's death.

The two Bergen researchers were part of the world elite in the field. Before coming to Bergen, Nygård had worked with the Nobel Prize winners James B. Summer at Cornell (1946), and Hugo Theorell at Karolinska Institutet (1955). Kleppe worked closely with Nobel Prize winner Gobind Khorona (1968), first in Wisconsin then at MIT.

The two pioneers developed methods that are now ubiquitously used. PCR is used when a patient sample is to be tested for the SARS-CoV-1 virus, when a forensic technician tests hair or blood from a crime scene, and in the development of new vaccines and medicines. Without PCR, it would be impossible to map genetic material, whether it is for genealogy or in studies of viruses or evolution.

Fifty years on, the two pioneers are almost forgotten.

This story is complicated: At a conference in 1969 Kleppe presented how DNA molecules can be heated in a test tube and added to a primer and then split like a zipper. At that time, few outside the professional community understood what he was talking about. The description of how adding a polymerase and cooling the protein can make a copy of a selected area of ​​the DNA - a process that can then be repeated several times - was technical and complicated. Immediately, only few saw the opportunities that basic research opened up. Molecular biology was one of several examples of sciences that in the post-war period became increasingly technical, specialized and impenetrable to outsiders.

Assigning honor and glory became even more complicated. One aspect is the transition from 'great men' to collaborative research groups. Kleppe and Nygård wanted to build infrastructure that allowed for collaboration, at first in the form of shared laboratories, later the construction of the High Technology Center on Marineholmen. Other aspects concern patents, equipment and the fact that the breakthrough occured in small, incremental changes. It is only in retrospect that we see what was important. Before Mullis received his Nobel Prize, Kleppe's discovery had already been commercialized It had already also been subject of a lengthy patent dispute and had been developed and standardized. As early as the 1980s, the technique had been improved and simplified. It had become possible to purchase laboratory equipment and polymerase that required much smaller temperature shifts to split and copy the DNA molecule. These developments led to the method's adventurous growth.

The ground-breaking work at the Department of Biochemistry led to formation of two new departments, Biomedicine at the MED Faculty, in the BB building, and Molecular Biology at MatNat, in the High Technology Centre. Today’s exhibitions in both buildings aims to honour the pioneering research, but also to encourage reflection about the research process. The exhibitions aim to involve visitors in the processes that have led to the kind of research on-going today – to inspire them and to help them identify with the processes involved in research. This research is critical to many aspects of modern life that we take for granted. How did it start? What issues have led the research to where we are today? How is new knowledge developed? What aspects should be celebrated; the discovery, further development, innovation and commercialization, the methods? Is today's research constructed so that our discoveries will only become significant in fifty years?

Part of a larger investment

The exhibition about Kleppe and Nygård is one of several initiatives at the University of Bergen aiming to profile, manage and disseminate the many fascinating important stories about researchers and research at the university over its lifetime. In June 2020, the Bjerknes Medals opened, an exhibition about three generations of scientists who were central in establishing the framework for today's understanding of weather and climate systems. Through the project "Secure collections", extensive work is being done to secure the university's many valuable collections. The University Museum has its own premises for rotating exhibitions that are developed in collaboration with academic environments. Funds have been provided for cataloguing artefacts. Amajor research project on the university's history of science is underway.

However, there currently is no overview of the exhibitions that the professional communities themselves have built up. Such an overview is an important historical record, and should be established, preferably in the form of a digital platform. This would also facilitate the university's fascinating science history reaching a wider audience. Digital exhibitions also make it possible for “visitors” to go more in depth in areas of particular interest. An overview could also help us to identify stories that might have been overlooked. Have there been any biases in the search for stories? Is it only the authors and the success stories we should convey? Should we deliberately hide routine work, management and dissemination of insights developed by others, the assistants' efforts, and the research that did not lead to breakthroughs?

The fact that exhibitions are often designed for guided tours for students and guests, without any explanatory texts, is also a point. However, guides are ageing, and self-guided tours are becoming more common. This conservation process needs to involve the guides themselves and incorporate their knowledge for preserving this heritage.

Might this be the way to secure a future for the scientific community? 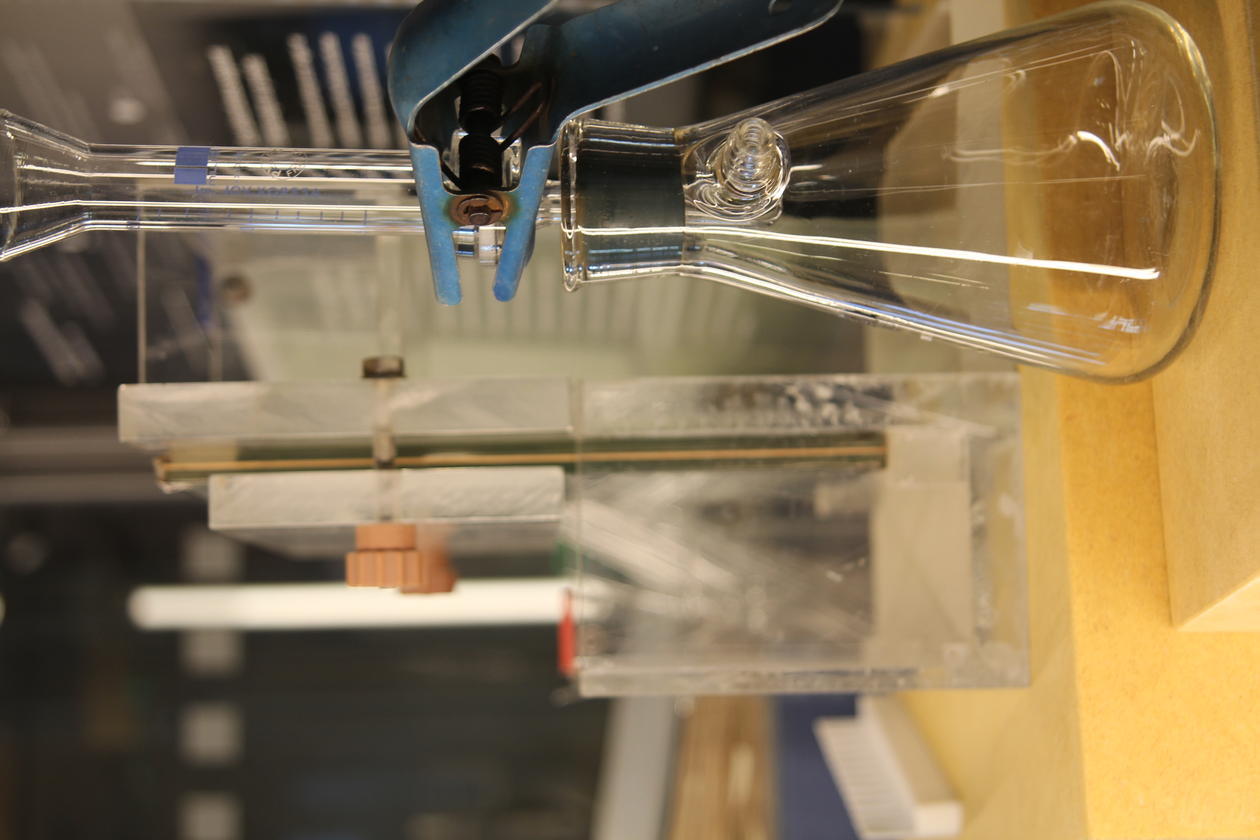 Details from the exibit at The Department of Biomedicine.
Photo:
Margarethe Bittins