Protein acetylation occurs both at lysine residues within proteins and at the N-terminus of proteins, catalyzed by lysine acetyltransferases (KATs/HATs) and N-terminal acetyltransferases (NATs), respectively. Recent studies employing large-scale proteomics demonstrated that a majority of soluble yeast (>50%) and human (80%) proteins were N-terminally acetylated. Despite the common occurrence, the functional role of N-terminal acetylation of proteins and peptides remains elusive.

During the last few years we have identified and described all the major human NAT complexes, including the subunit composition, substrate specificity and knockdown phenotypes, providing strong support for an evolutionarily conserved N-terminal acetylation system from lower to higher eukaryotes. NATH, a component of the human NatA complex, was originally identified by our group as upregulated in thyroid papillary carcinomas. Knockdown of NatA in human cancer cell lines induces apoptosis and G1-cell cycle arrest and sensitizes cancer cells to drug induced apoptosis. Thus, NatA may be an attractive drug target for cancer chemotherapy. Using a large-scale proteomics approach, we have defined substrate specificity of the human NatA complex. Based on this, we have synthesized small chemical inhibitors of NatA that will be further developed for their potential use in cancer treatment. 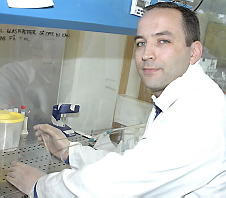