Professor Camilla Krakstad has her background from research on signal transduction, and during her PhD, she studied cAMP signaling in apoptotic cell death in both normal and cancer cells. She is now leader of the the Bergen Gynecologic Cancer Research Group.

The Bergen Gynecologic Cancer Research Group focuses on molecular profiling of endometrial and cervical cancers, to better understand alterations associated with cancer development and progression and with the ultimate goal to improve treatment. The group’s research is based on patient samples collected over two decades with extensive clinical information available. In recent years, a special focus has been on establishing patient-derived organoid model systems for endometrial cancer alongside a continuous effort to gain knowledge on the genetic landscape of endometrial and cervical cancer.

During 2021, the group has continued its focus on improved diagnostics and treatment for endometrial and cervical cancer, including a large study on the genetic alterations associated with cervical cancer. To enable mechanistical studies of such findings, model systems have been developed, including patientbased organoids and orthotopic mouse models. A current focus is within radiogenomics, where the group’s competences within genomics, mathematics and imaging are combined to integrate genomic and radiology data for improved pre-operative diagnostics.

Several important findings have been published during 2021.

First, the group is the first to establish patient derived endometrial cancer organoids. The models were deeply characterized and compared to their donor counterparts. Models were found to be both representative for endometrial cancer, genetically stable in culture and mimic disease development when orthotopically implanted in mice.

Second, the power of integrating radiologic and genetic data in a radiogenomics study of endometrial cancers was demonstrated. Unsupervised clustering of texture features from preoperative images could identify a patient subgroup with significantly worse prognosis, and distinct genetic features. In a follow-up study, the group currently investigates whether similar approaches can be
valid also in cervical cancer.

Third, the MOMATEC2 study is ongoing for evaluation of hormone receptors as biomarkers in endometrial cancer. As part of this study, quality of life data is collected. The first report on such data was published in 2021, with a special focus of long-term effects of chemotherapy and lymph-node staging.

As the incidence of endometrial cancer is expected to rise due to its tight link to obesity and high age, three main challenges are:
1. Translating genetic knowledge to better treatment.
2. Identifying specific patient subpopulations that are likely to respond to therapy.
3. Link molecular subgroups, often defined by the TCGA classification, to relevant treatment.

The group will continue to develop their molecularly defined models for endometrial cancer and use these for drug testing, functional experiments, and exploration of subtype specific genetic alterations. The group is working closely with collaborators at The Broad Institute and Dana Farber Cancer Institute, Harvard, to identify dependencies and vulnerabilities in these models. The members will expand the biomarker focus exploiting the Hyperion Imaging System and relevant biomarker-panels for both stromal and tumor components and will continue the strong focus on MOMATEC2, aiming to complete this prospective trial together with contributing centers, both nationally and internationally.

Being part of the CCBIO community

"CCBIO offers an excellent network of researchers in the field of cancer, and allows close collaborations between research groups with similar focus but different expertise. The CCBIO seminars and the CCBIO annual symposium are great venues to interact and develop collaborations and future projects. The CCBIO research school has been important in the training of PhD students in the group and has also provided teaching opportunities for senior researchers." 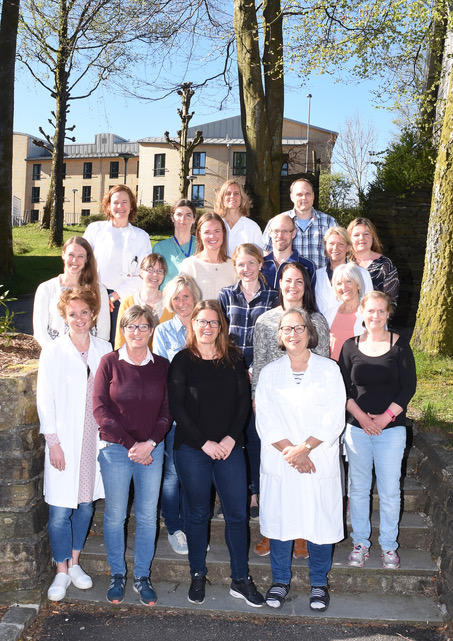 Some of the members of the Gynecologic Cancer Research Group
Photo:
Jørgen Barth
02.11.2022