An overview of the key activities in the different PI groups within CCBIO throughout 2015.

CCBIO has a focus on tumor-microenvironment interactions and plasticity programs in primary and metastatic lesions and how these can define aggressive tumor features and predict cancer progression patterns. CCBIO has three overlapping and well integrated research areas: basic studies of cancer mechanisms, discovery and validation of cancer biomarkers, and clinical studies. An ambition for CCBIO is to obtain rapid transfer of knowledge to practical medicine. Since the opening of CCBIO in 2013, several research projects have been initiated and are now running in different teams, with increased collaboration and networking within the center.

In the area for basic studies, projects are focusing on how tumor cells interact with the surrounding microenvironment, by epithelial-mesenchymal transition, plasticity and transdifferentiation, angiogenesis induction and matrix dynamics, leading to the initiation of metastatic spread.

Below you will find description of key activities for each group during 2015.

In summary, several efforts and initiatives within CCBIO, with increased collaboration, are now up and running. The projects are spanning from matrix biology and plasticity programs, through discovery and validation of biomarkers and signatures, to clinical trials with targeted biomarker panels using liquid biopsy and single cell analysis. In this context, the programs on ethics and economics of biomarker based therapy, are also expanding.

In Kalland's group, one key activity has been the generation and characterization of a new experimental model of stepwise prostate tumorigenesis, comprising benign cells (EPT1), pre-malignant mesenchymal type cells (EPT2), tumorigenic (EPT3-N04/EPT3-PT1) and metastatic (EPT3-M1) cells in mice, with different phenotypes and behavior. Each of the different cell types can be passaged indefinitely. Epithelial-to-mesenchymal transition (EMT) was an early feature of the model, and tumor initiating cell (TIC) subpopulations have been characterized among the tumorigenic cells.

Work on the experimental tumorigenesis model has resulted in increased insight into the potential of gene expression reprogramming as a source of cell heterogeneity. Subpopulations of TICs show activation of the WNT pathway and an autocrine ROS/IL6/STAT3 loop with increased resistance to apoptosis and anoikis. Recently, this model has been used in a drug discovery and development program, resulting in 5 WNT/beta-catenin inhibitor candidate (with patents pending).

Gullberg's group has studied how different connective tissue cells interact with tumor cells and the extracellular matrix, a process which is similar to wound healing and scarring. In particular, integrins are important regulators of these processes.

In collaboration with Gullberg and others, Reed's group has a focus on interstitial fluid pressure (Pif) in tumors and how this can be modified. Tumors have an elevated Pif that acts as a functional barrier towards transcapillary fluid flux that can block the distribution of cytostatic anti-cancer agents. The group has reported that integrin alpha-11 has an influence of the interstitial pressure, and subsequently on tumor growth patterns in mice lacking this integrin (breast and prostate cancer models).

The results point to important biophysical features of the tumor microenvironment and their importance for cancer progress. Reed's group has also been working on the use of improved imaging techniques (DCE-MRI) in determining tumor vasculature and transcapillary transport in preclinical models.

Johannessen's group has worked on basic and translational aspects of oral cancer with focus on cancer-host interactions, particularly between the surface epithelium and the underlying connective tissue. The team has established novel in vitro assays of human tissue-based 3D cell culture models of normal mucosa and oral cancer tissue, and a new rodent oral cancer model. In collaboration with Gullberg´s group, integrin alpha-11 has been identified as a key regulator in stroma-endothelial cross talk.

Johannessen´s team also aims to develop a diagnostic and prognostic tool that can stratify patients with oral premalignant and malignant lesions for a more individualized therapy of oral cancer patients, and they have published a “malignancy index” signature which is now being validated.

The group of Lorens works on cellular plasticity, such as stem cell differentiation and transdifferentiation, a critical prerequisite for adult tissue homeostasis and injury repair. Using comparative functional approaches, the team is investigating the regulation of tumor cell plasticity and maintenance of normal adult stem and progenitor cells. Recent results highlight the Axl receptor tyrosine kinase as a key regulator of both normal adult epithelial stem/progenitor cells and a determinant of carcinoma cell plasticity. These studies on Axl signaling have provided new insights into the regulation of tumor phenotypic heterogeneity and form the basis for the recent clinical translation of novel Axl inhibitors (e.g. BGB324). Importantly, it was recently also reported that Axl-activity could be blocked by lowdose warfarin.

Akslen's team has focused on the use of biomarkers for improved molecular classification and grading of malignant tumors, as a better guide for targeted and precise treatment. Studies of human tumor samples (primary and metastatic lesions) are combined with experimental cell and animal models to improve translation. The team is concentrating on two main programs: first, studies of the tumor microenvironment, especially tumor-vascular interactions and angiogenesis markers; second, genetic and molecular markers of aggressive tumors, especially related to tumor cell proliferation.

The team has reported novel tissuebased angiogenesis biomarkers.  Microvessel proliferation was studied in several human tumor types and provide better prognostic information than vascular density. This marker also proved valid in xenograft models of breast cancer. By supervised analysis, a 32-gene RNA-based expression signature for microvessel proliferation was prognostically significant in endometrial cancer and is now explored in other tumor types. An 18-gene signature was identified for vascular invasion by tumor cells, pointing towards novel mechanisms involved in early metastatic spread, and was significant in endometrial and breast cancer. The progenitor cell marker Nestin has been found to identify subgroups of aggressive tumors in breast cancer and malignant melanoma.

In breast cancer, proliferation markers in primary tumors and metastatic lesions have been reported to improve molecular classification, as a basis for more precise treatment. Correlations between vascular biomarkers and imaging features have been performed on breast and endometrial cancers in collaboration with other teams. Genetic markers are being explored in melanoma, like CDK4 and BRAF as well as others.

Salvesen's group has made significant efforts in biomarker discovery and validation in gynecologic cancers, with special focus on endometrial cancer and hormone receptor regulation and impact. For both estrogen receptor (ER) and progesterone receptor (PR), loss of expression is linked to aggressive disease and poor survival. ATAD2, a cofactor for ER, was strongly linked to  aggressive signatures, while FOXA1, another ER cofactor, showed an unexpected switch in expression from primary tumors to metastatic lesions. Loss of both ER and PR predicted lymph node metastases, and this finding led to determination of ER/PR status for endometrial cancer as a stratifier for lymphadenectomy in a phase 4 implementation trial (MoMaTEC2). Stathmin expression was found to predict clinical response to taxane treatment in endometrial cancer, both in preclinical and clinical settings. This finding will be taken to a phase 2 integrated biomarker trial for paclitaxel treatment in endometrial and ovarian cancer (MoMaTEC2).

The team also continues studies on genetic alterations in gynecologic cancer, in a collaboration with the Broad Institute. In particular, data from an extensive molecular profiling of genomic alterations in cervical carcinomas were presented (published in Nature). Similar studies on endometrial cancer, also in collaboration with several other teams, are ongoing. Further, the team has studied different imaging modalities in preclinical and clinical settings in relation with angiogenesis and clinical characteristics. The findings are relevant for preoperative patient stratification.

Gjertsen's group, supported by the Early Phase Clinical Trial Unit at Haukeland University Hospital, has been the initial center for a phase I trial BGBC003; clinicaltrials.gov) with the novel anti-Axl drug BGB324 (per oral formulation) from BerGen-Bio. The trial is now also recruiting in Houston (Texas) and Germany. The trial will likely conclude at the end of 2016. In parallel, more focused small trials in chronic myeloid leukemia has been performed and completed in collaboration with the Nordic CML Study Group, providing a unique material for proof of principle testing of how to monitor signaling in cancer cells as biomarkers for risk and therapy response. Importantly, new instrumentation funded by Bergen Research Foundation in 2015, a mass cytometer, allows multiparametric analysis of single tumor cells. Through CCBIO and the Helse Bergen clinical trials units, the team will address clonal evolution in AML through mass cytometric analysis.

The team has performed extensive studies of signaling patterns in CML cases. There is a need for more direct biomarker analysis for early kinase inhibitor therapy, based on increasing reports of adverse events. The group has demonstrated that the drug target can be monitored in the actual cancer cells, and suggest that cellular signal systems involved in signaling of BCR-ABL outline the long time response. This single cell analysis of cellular signaling fit with the blood levels of the drug, and is likely a preferred method for future precision medicine with signaling targeted therapy. In contrast to the nearly monogenic BCR-ABL positive chronic myeloid leukemia, acute myeloid leukemia (AML) usually comprise 4-5 mutations. In the phase I trial with BGB324, the concepts of single cell biomarker profiling is tested. Analysis methods and read-out panels have been developed during 2015. The possibility to employ single cell biomarker technology in drug development is very promising. The strategy is also to move these concepts beyond blood cancers to metastatic solid cancers, based on strong collaborations within CCBIO, and several trials are now prepared. In collaboration with Kalland (PI), a phase I clinical trial of cryoimmunotherapy at Haukeland University Hospital has been initiated for patients with metastatic castration resistant prostate cancer, so far with around 10 patients recruited. The trial is based upon a dendritic cell based immunotherapy protocol in collaboration with the Haakon Ragde Foundation in Seattle (USA). One important aspect of the research protocol is to overcome tumor cell heterogeneity. The associated biobank is used for development of advanced immune-monitoring and circulating tumor cell enumeration as well as organoid cell culture isolation.

Straume's group is focusing on the identification of predictive biomarkers for therapy response in academic trials of patients with metastatic melanoma and kidney cancer. In melanoma, previous results of a clinical trial with the anti-VEGF antibody bevacizumab documented that ~30 % of the patients experienced clinical benefit of the treatment. Based on a screen of multiple candidate markers in tissues of primary tumors and metastases, as well as serum markers, HSP27 expression in metastatic lesions was able to predict therapy response. In metastatic kidney cancer, the VEGF receptor inhibitor sunitinib is first line treatment, and about 50 % of the patients are expected to respond.

In a trial series of 45 cases with metastatic clear cell renal carcinoma, the team is now working on a set of candidate biomarkers for their predictive value. In a collaboration with national centers, 150 patients with metastatic melanoma were treated with ipilimumab, a CTLA-4 antibody (phase IV clinical trial). Blood and tissue samples are being studied to identify predictive markers of response. Further, in a collaboration between CCBIO and BerGenBio, an investigator initiated randomized phase II clinical trial in metastatic melanoma will be initiated to study the combination of the Axl kinase inhibitor BGB324 with pembrolizumab or the BRAF inhibitor dabrafenib. Focus will be on predictive markers of response. 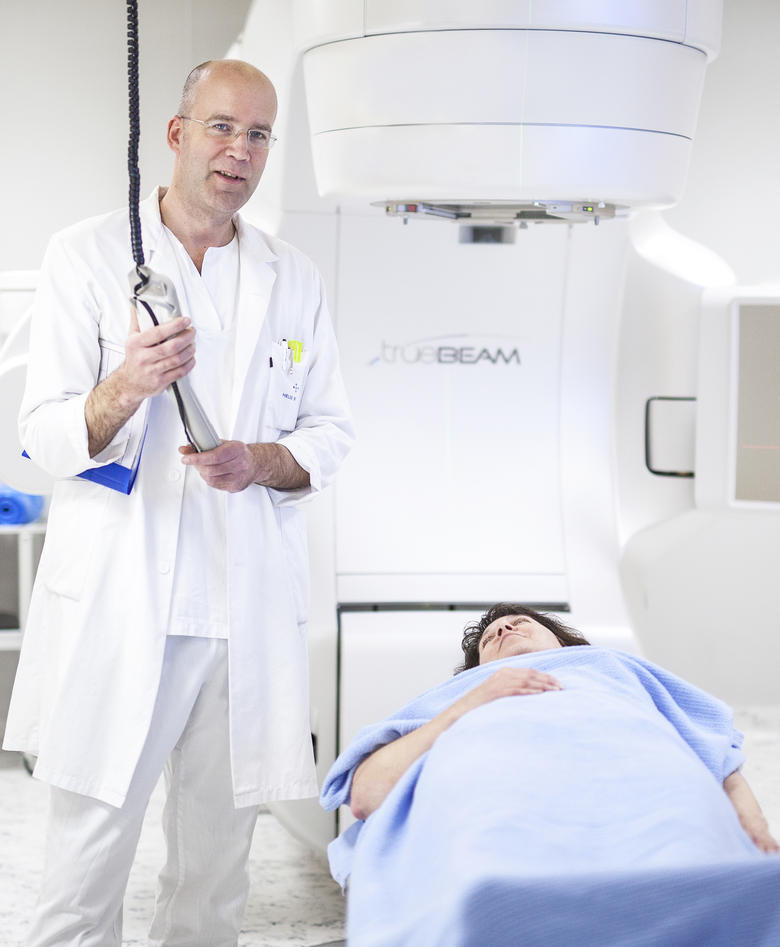 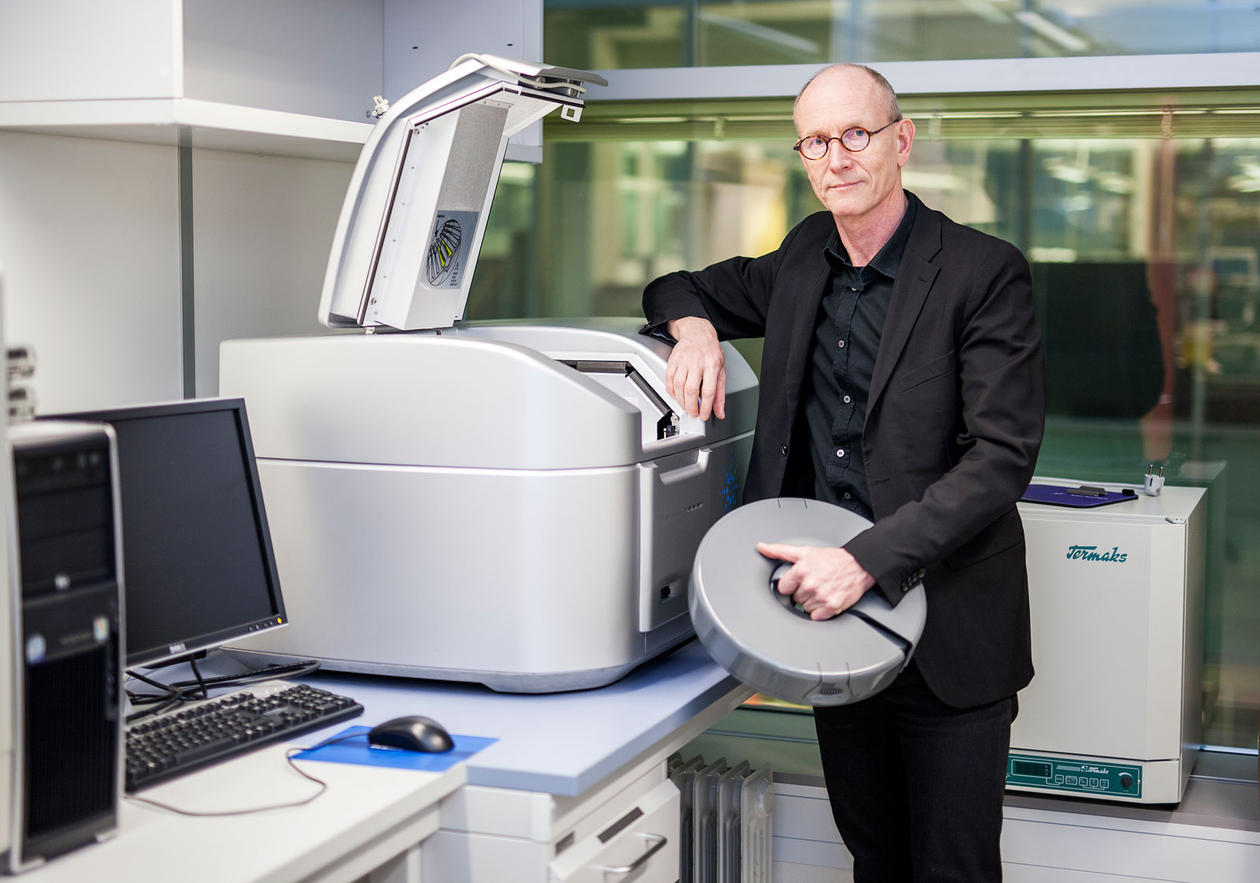 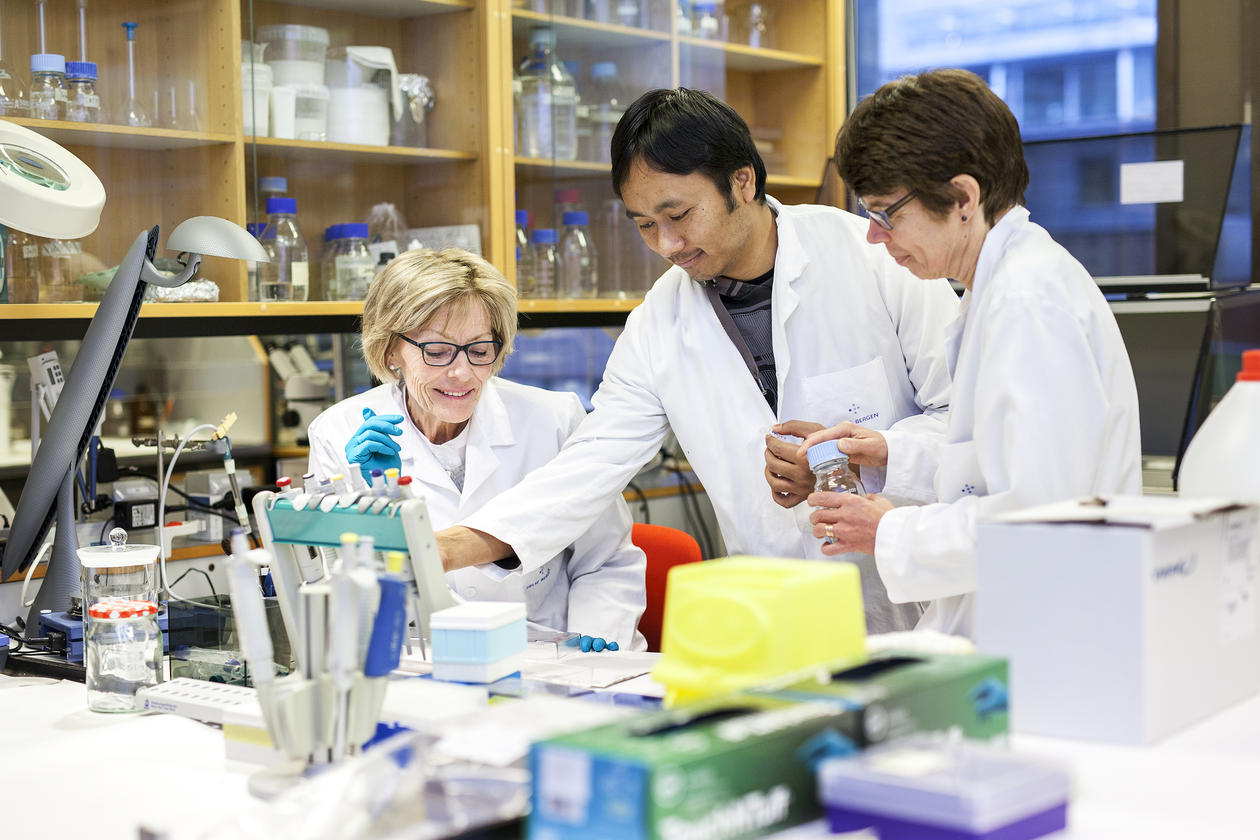 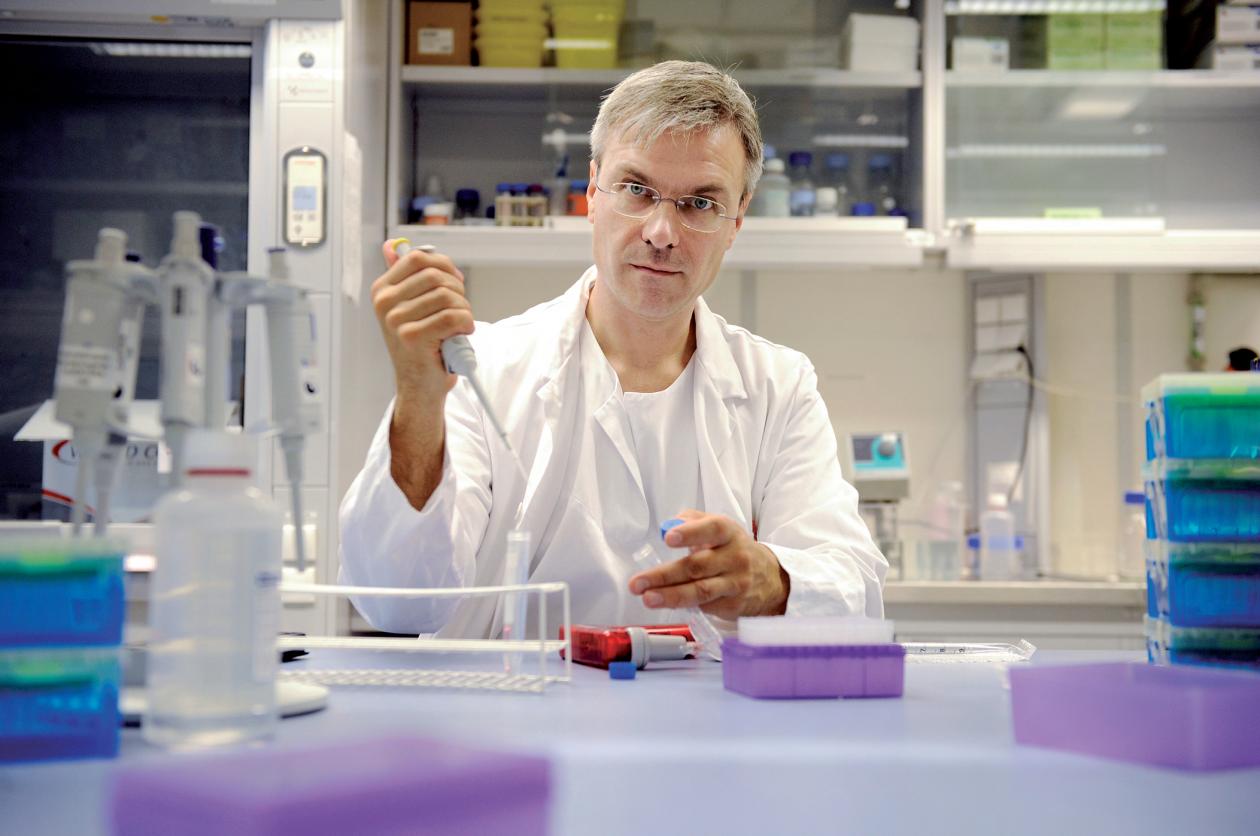