Tore Solheimslid is on his second year of the energy master program with specialization within energy technology and thermal machinery. He writes his master thesis for Greenstat about optimization of hydrogen production facilities. He hopes his research can help to get hydrogen onto the market to replace fossil fuels and reduce global warming.

At some point during my life it was natural for me to study something within renewable energy. I have a bachelor’s degree in energy technology from HiB, and I felt that I needed a master’s degree to be better suited for getting a job. I also wanted to know more and have more competence.

What do you think about the master in energy at UiB/HiB?

When I first started my master I chose the topic of optimization. After a year I figured out that it didn’t suit me very well, as it was very heavy on programming and mathematics. However, if I had the right background, optimization would have been really interesting. Particularly due to its focus on energy efficiency, which is a really hot topic today.

I felt like I had to switch topic to thermal machinery. However, the specialization topic wasn’t the most important for me, but the master thesis that I want to write on optimization of hydrogen production.

The topics in thermal machinery are mostly focused on combustion engines. This is a little bit heavy on the fossil fuel topics for me, but it’s interesting as it’s beneficial to know every side of a topic, so nothing is irrelevant.

Tell us about your master thesis.

The basis is that I work part time for a company called Greenstat which in short terms is the renewable energy’s answer to Statoil. Greenstat has written a letter of intent together with TiZir Titanium & Iron who produce iron and titanium by using coal as oxidant in their production. They have the option of using hydrogen instead, a relatively new method. So that’s how they got in contact with Greenstat. The plan is that Greenstat sets up a production facility and delivers the hydrogen that TiZir needs. If we can produce this hydrogen with the least amount of expenses and the highest efficiency, we would earn more money which is always relevant. So my thesis will be on optimizing the production facility in regard to economy and energy efficiency.

How did you build the connection with Greenstat?

Since I already had a part time job at Greenstat, I could write my master thesis in cooperation with them. When I first heard about Greenstat I thought to myself that this had to be the place for me.

Then, I started attending the talks Vegard Frihammer [Founder and GEO of Greenstat]   held and I simply spoke to him about my views and asked him questions on various topics. Eventually he asked me to take a summer position at Greenstat and it just escalated from there. So if you have a goal, go for it, don’t be lazy.

How do you and Greenstat benefit each other in relation to your master thesis?

Hopefully, if I do everything that I’m supposed to do with my master thesis, Greenstat will be able to use my work when we are going to establish new hydrogen production facilities. If everything goes according to the plan, I will probably have a job for life.

There are a lot of people in the office, especially from Christian Michelsen Research and Prototech, which have a lot of experience with production and consumption of hydrogen. They have agreed to let me bug them with a lot of questions, so I’m quite privileged.

How do you think your research can influence the world?

Well, the goal has to be to save the world right? That‘s a difficult challenge, but let's say that my master thesis gets as perfect as I want it to be. Then Greenstat will have an easier way to establish hydrogen production facilities. As such, Norway will have a greater energy hungry industry and potentially becoming world leading in that sense. The economy of Norway could benefit a lot from that. Everything is relative, my contribution may not mean that much, but it could mean something. On the global scale it would mean less, but it could help to some extent to get hydrogen onto the market, replace the fossil fuels and get a zero emission society which we need in order to limit the global warming to 2 degrees or less.

How do you think this education can be used in your future career?

My master thesis will hopefully be used. I learn a lot about various components in the combustion cycles, which is relevant for many other processes. In addition it is good to have knowledge on the details of the components, and that will help me to understand what limits specific processes.

How do you picture the energy future? What is your vision or hope?

Since solar and wind will be very hot topics in the future, we need to be a part of that. We could be exporters rather than importers of such technology, and we could live of that. A lot of other countries really need a lot of solar and wind power in order to sustain themselves in the future.

In Norway I picture an energy hungry industry with less fossil fuel, more hydrogen, more wind, solar and some more hydropower. Globally pretty much the same, but it’s more critical that the global emissions go down. We need to reach the zero emission world as quickly as possible in order to be as safe as possible and do it as cheap as possible. 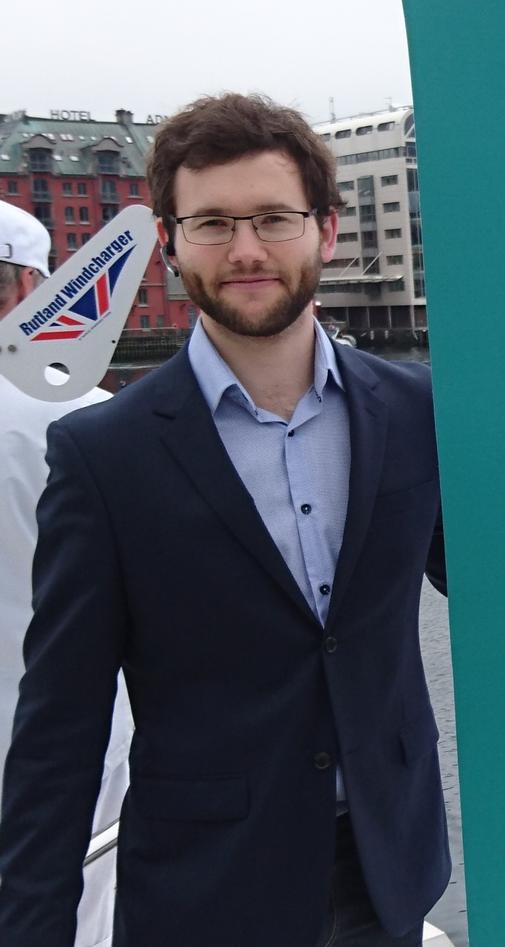