Finn Gunnar Nielsen was the head of the R&D project where the first full-scale prototype of a floating wind turbine was developed. He held a talk at Bergen Energy Lab the 29th of August, telling the story of Hywind from the idea was born to the world’s first floating wind farm currently being installed in Scotland.

The idea of the Hywind offshore floating wind turbine was born as early as in 2001, when two employees of Statoil, Dag Christensen and Knut Solberg, were out sailing. They saw a buoy floating in the water, and drew a sketch on a napkin of how the buoy could be 100 meters tall and with rotating blades on top. Statoil used the next eight years to turn the sketch into the first full-scale floating wind turbine the world had seen.

Finn Gunnar Nielsen, head of the R&D project where Hywind was developed, spoke about the numerous challenges faced during the development stage. An offshore floating wind turbine is a complex and challenging dynamic system, exposed to a harsh environment with loads from winds, waves and currents. Mooring line dynamics and structural dynamics are complicated, and an intricate control system is necessary to control the operation of the turbine and the movements of the floating structure.

In 2005, the Hywind concept was demonstrated through model scale experiments in Trondheim. The model scale of 1:47 came with some challenges, as not all parameters can be scaled linearly. The masses scale with the power of three, leading to difficulties related to the weight of the different parts. For example the nacelle, housing a fully functioning pitch control unit, could only weigh a couple of kilograms.

The full-scale 2.3 MW Hywind demonstration unit was deployed in June 2009, about 10 kilometres west of Karmøy in Norway. It is still there today, and has endured harsh conditions with wind gusts up to 40 m/s and significant wave heights of 10.5 meters. Finn Gunnar and Statoil won the 2010 edition of the “Energy Globe”, for the success of their Hywind pilot project.

The success of Hywind also lead to the world’s first floating wind farm currently being installed off the coast of Scotland. Statoil’s “Hywind Scotland” pilot farm is made up by five 6 MW wind turbines and aims to demonstrate the feasibility of future commercial offshore floating wind farms. It will start delivering electricity to the grid during 2017, powering about 22 000 households. The five structures were assembled at Stord during May this year, and all five have now been successfully towed across the North Sea and installed on-site in Scotland. An idea that originally was thought of as “crazy” turned out to be the future for Statoil. 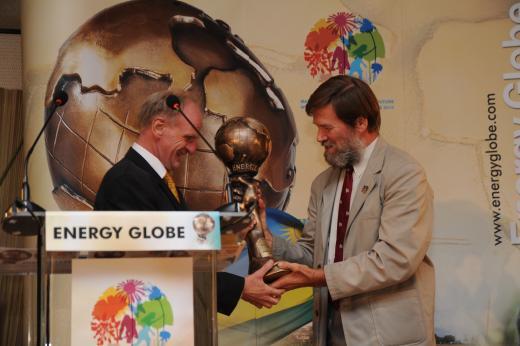