Einar Svendsen showing that the area of the (six) black dots is enough to produce all of today's total energy demand.
Photo:
Bergen Energy Lab

In his presentation at the Bergen Energy Lab lunch meeting on the 6th of February, Einar Svendsen spoke about observed and modelled global development of new renewable energy and the probable effects on the demands for fossil fuel.

The United Nations have defined 17 sustainable development goals to eradicate poverty, protect the planet and ensure that all people live in prosperity and peace. The access to clean and affordable energy is described in SDG 7, and energy is crucial to almost all challenges we are facing in the world today. An increasing population with a higher standard of living calls for more energy. In his presentation, Einar predicted that the energy demand will rise from 16 TW today to 30 TW in 2050, but where will this energy come from?

Enormous amounts of clean energy is available; the six black dots on the picture above is enough to produce 18 TW from solar energy, and additional wind energy resources are available. With the historical development of solar and wind power between 2000 and 2016 as basis, Einar has developed a model for future global solar and wind power production (see fact box). By his modelling, Einar finds that the global demand for fossil fuels will crash during the period 2030-2040, and in 2050 almost all power (in addition to hydro and nuclear power) will be supplied by solar and wind (see figure on the right). However, the development of solar and wind is slowed down by a number of resistances/breaks/inertia such as politics, human tradition, presence of fossil fuelled based technology, the challenge of energy storage and so on.

Einar Svendsen also talked briefly about climate change’s evil twin, ocean acidification. Ocean acidification is directly linked to the use of fossil fuels, and a sneaking threat to marine ecosystem functioning. Norway is the world’s second largest exporter of fish and fish products, it is Norway’s second largest export product after fossil fuel and by far the largest based on renewable resources. The risk of ocean acidification is uncertain, and depends on the ecosystem’s ability to adapt to acidification and human’s ability to adapt to changes in marine life; meaning that the precautionary principle should be applied.

Read more in Einar’s presentation below! 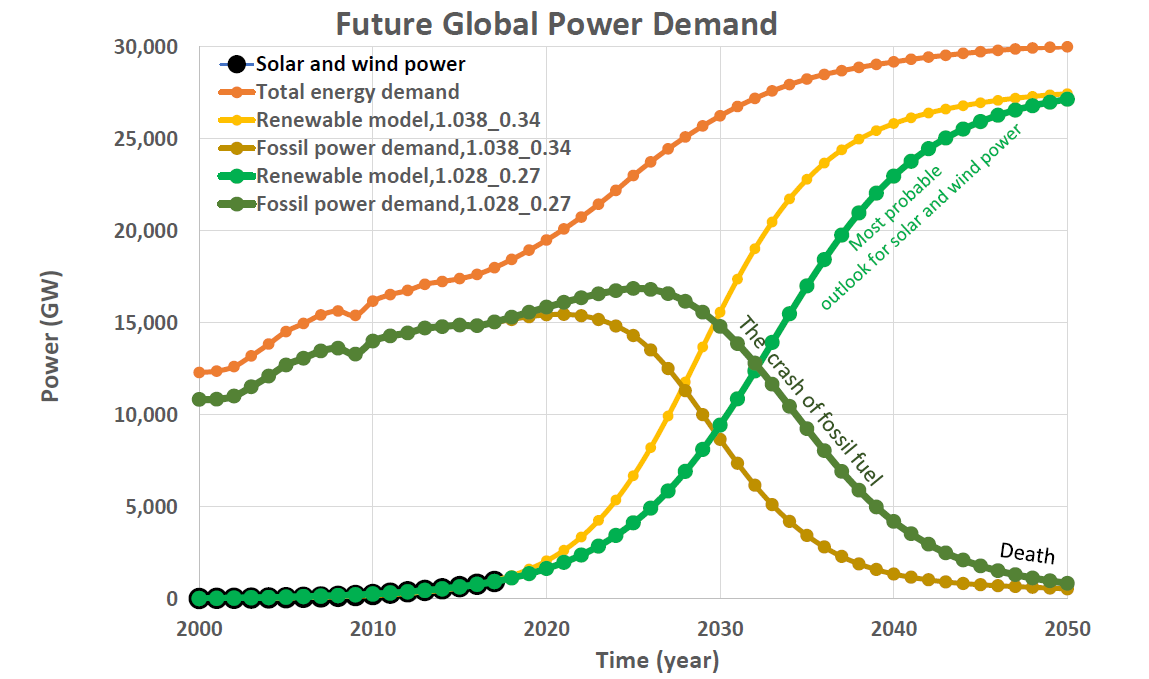 The future development of wind and solar and global power demand as predicted by Einar's model. (Click on the image for a larger and readable version)
Photo:
Einar Svendsen
Documents