If your skin is worn away in hell, you get a new one so that you can be tormented even more. There is no time out in the Islamic hell. The idea of hell is found in many religions and it is used, among other things, as a weapon by the clergy.

A DEMONIC BATH: In this Buddhist version, hell is a hot place where people are boiled and impaled by demons. The picture is from a monastery in Tibet.

Women who were hung by their tongue or hair. Men who had liquid metal poured down their throat. Men who were forced to eat their own, burnt flesh. These are some of the scenes that the prophet Muhammad encountered on his journey through the Islamic hell. The drawings, which are Turkish and date back to the 15th century, illustrate how the idea of hell is not something exclusive to Christianity. The idea of a place of punishment which we go to when we die is found in many religions. In addition to Islam, Judaism and Christianity, such concepts are also found in Buddhism, Hinduism and Zoroastrianism.

‘The idea of hell encourages religious piety and moral conduct. Together with religious loyalty and morals, representations of hell are also instruments of power in the hands of the religious elite,' says Einar Thomassen, Professor of Religion at the University of Bergen.

Examples of hell as an instrument of power can be found in Catholicism and Hinduism, where you can buy your way out of eternal torment. In medieval Catholicism, purgatory was introduced as a third realm. Purgatory can be described as an interim hell, a place where you stay for a given period before entering paradise. If you paid for yourself or for relatives, the Church would hold a requiem mass to reduce the length of time spent there.

‘The Church was given the power to mitigate punishment. In Hinduism, it was also possible to alleviate the torment of hell by offering gifts to the priests,' says Professor Thomassen. In Hinduism and Buddhism, deeds performed in this life will shape your next life. As well as different kinds of earthly life, you could also end up on different levels of heaven or hell. The ultimate goal is to liberate yourself from the eternal dance of rebirth. In both of these religions, the fear of hell serves as an incentive to religious piety. While you can buy yourself free from torment in Hinduism, it works more like a law of nature in Buddhism, according to the professor. ‘Buddhism also has terrible and grotesque conceptions of hell,' the professor says.

The Christian conceptions of hell may have been influenced by Eastern religions such as Zoroastrianism and Buddhism. This spring, Professor Thomassen retired as editor of Numen, the international journal on the history of religions. The final issue he edited was a special issue on conceptions of hell in different religions, a theme issue that stemmed from an international conference on hell held in Bergen two years ago.

One of the topics researchers investigate in this special issue is what functions these conceptions of hell might have. In many religions, hell has an instructional function while at the same time serving as a threat deterring people from committing sinful acts. To not believe, to be a non-believer, can result in you ending up in hell, particularly in Christianity and Islam. In this way, hell serves as a means of threatening people to convert.

The professor points out that the conception of non-believers has a sectarian aspect to it. It is all the others that end up in hell. This does not fit well with the modern Western world’s notion of pluralism, which is based on people’s right to believe in whatever they wish as enshrined in the Universal Declaration on Human Rights. He believes that this notion of pluralism is one of the reasons why the conception of hell has been sidelined in modern Christianity: ‘Today’s Christian leaders are embarrassed about the subject of hell. It cannot be reconciled with human rights. In one way, you could say that God violates human rights,’ he quips.

In narratives about hell, we encounter blood, guts and terrifying visions of devils and demons that do terrible things to people's bodies. The different religions’ versions of hell contain many similarities in the types of tortures people are made to endure. There is physical torture, whereby bodily pain is inflicted in the form of impalement, burning or immersion in boiling water. You can be hung up on hooks or forced to eat a devil’s head, snakes or spiders. You can be forced to drink boiling water or molten metal.

‘In the Islamic hell, your skin can be worn away through torture. But then you will receive a new skin so that you can be tormented even more,’ says the professor. As well as physical pain, there is the possibility of psychological torment. For example, you may be condemned to an existence in utter darkness where all you will hear is moaning and groaning and where you see absolutely nothing; a form of torture that plays on the human fear of being alone in the dark.

Professor Thomassen thinks that most of the inspiration for Dante’s Inferno may have come from the Islamic stories about hell, where hell is divided into different floors and areas, and where the punishment varies according to the type of sin committed. The grotesque and frightening descriptions of hell that are common to all the major religions are reminiscent of today’s horror films and fiction.

‘The conceptions of hell may well have been terrifying entertainment. Perhaps we need to be shaken up a little sometimes,' the professor ponders. To derive pleasure at the expense of others is not usually something that is promoted as a religious virtue, but, in the old conceptions of hell, one of the pleasures of reaching paradise was precisely that you could then look down on those who had been condemned to eternal torment.

The article is published in Hubro 2/2009 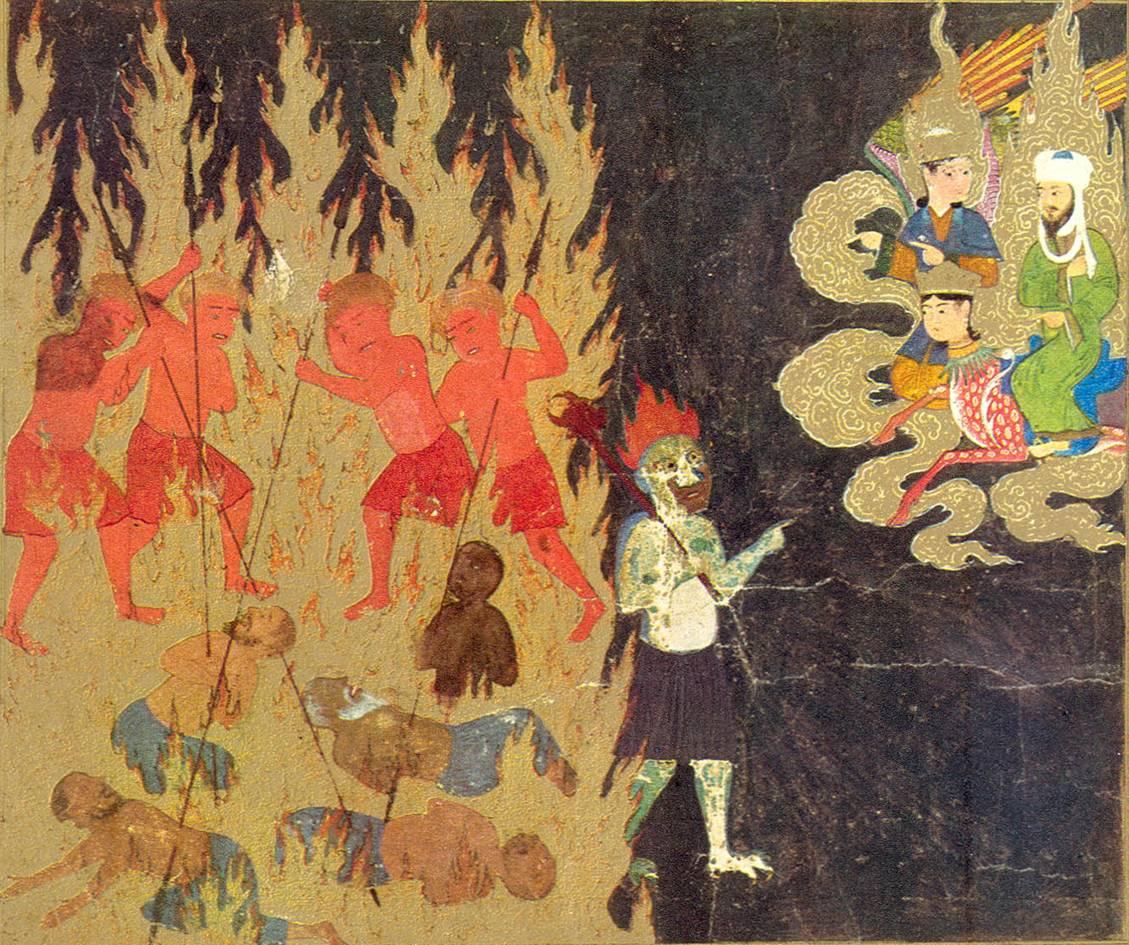 MUHAMMED ON HIS TRAVELS: The Turkish drawings are from the 15th century and depict the prophet Muhammed on his journey through hell. The Islamic hell is a fiery place.
08.12.2009