‘This is a high-risk project. If we’d known exactly how to do it, we would have done it long ago,’ Frede Thingstad tells På Høyden. ‘These funds mean that we can sit down and think about how we can solve these problems.’

On Thursday evening, he was informed that he and the Marine Microbiology research group had been awarded NOK 20 million from the European Research Council’s (ERC) Advanced grant. This is the third application granted in less than two weeks, after archaeologist Christopher S Henshilwood and brain researcher Kenneth Hugdah were allocated funding last week.

’The project is a dream, and it is the dream we have sold. Now, we have to sit down and prove that we can carry this out,’ says Mr Thingstad, who admits to being slightly nervous.

The research project aims to develop methods to improve our understanding of how marine organisms relate to each other.

‘It is an incredibly complex ecosystem,’ he says. ‘There are millions of viruses and other organisms in a litre of water. A bacterium lives for one day before the other organisms put an end to it. What we wish to achieve is a better understanding of the complexity based on the organisms that are active in the ocean’s ecosystem. What we promised in our application was to use fractal theory and thereby contribute to a new understanding of the ecosystem.’

In its statement, the panel that approved the application writes that it was particularly impressed by the desire to develop fractal models. It also describes the project as innovative and groundbreaking:

‘The proposal represents a highly innovative approach to improve our understanding of marine pelagic microbial communities, which are responsible for a major fraction of all carbon cycled in the biosphere.’

The panel also believes that Bergen, and the University of Bergen, is an excellent place to conduct research in marine biology, and it refers to UiB’s long-standing tradition in this field, its great expertise and good research facilities.

The result of hard work

‘This is like winning the Champions League – you can’t get funding just by luck. Hard work is required,’ says acting Research Director Svenn-Åge Dahl to På Høyden.

The Department of Research Management plays an important part in writing applications to the EU, and it has a dedicated group that works specifically on such applications. Mr Dahl is impressed that as many as three applications have been successful in less than two weeks.

‘A lot of good work has been put into achieving this by several parties, ourselves included,’ he says.  ‘It has a lot to do with motivating researchers. A great deal of effort must be put into the applications, and it is a lengthy process. It is very demanding on researchers.’

'This further underlines that we are an international research university,’ says the rector in a comment to På Høyden. 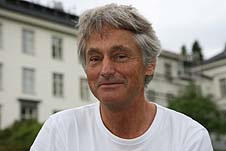 Frede Thingstad is leader of the Marine Microbiology research group, which has been awarded NOK 20 million for its research project.