Shakespeare’s texts were a fashionable bible

Shakespeare’s plays are illustrated nearly as much as biblical texts.  But not many academics have so far been interested in the illustrations and paintings found in Shakespeare’s books.  Most have been engrossed in the texts and their interpretation.

Stuart John Sillars of the Department of Foreign Languages is the exception that proves the rule.  He has delved thoroughly into Shakespeare’s works.  He will soon have finished writing his third book in three years about the tradition of illustrating and painting Shakespeare.  Altogether, he has so far produced more than eleven hundred pages.

In his last book, “Shakespeare, Time and the Victorian Visuals”, he looks at the Victorian obsession with time, which manifested itself in an enormous preoccupation with history.

- Shakespeare was very important for English national feeling in the Victorian era.  He was for many the embodiment of everything English, and the maker of English history, says Sillars.

Art as a guideline.
Spectacular theatrical productions depicting war and the development of the monarchy brought history to life in the Victorian era.  History was presented as entertainment, written by Shakespeare, the greatest of all Englishmen.

- Shakespeare’s portrayals became moral guidelines in Victorian times.  Paintings, plays and photographs showed how true Englishmen should behave.  Victorian obsession with time and authenticity was reflected in the work of the artists of the day, says Sillars.

Historical events were portrayed with almost exaggerated accuracy by artists.  Throughout the 19th century, actors could also be photographed in their costumes, during emotional charged scenes. This made the play more intense.

Authenticity was important
A hundred years earlier, during the 18th century, Shakespeare’s characters were depicted by the artists of the day, as baroque, lifeless and almost classical statues.  It became extremely important for Victorian artists, on the other hand, to portray the characters as real people in real situations that everybody was familiar with.

- The paintings fragmented the plays into moments of highly charged emotion. The characters were taken out of context and looked upon as genuine people in actual situations, expressing good moral qualities, says Sillars.

Pictures influence interpretation
Sillers has also been preoccupied with how Shakespeare is visualized in the books “Painting Shakespeare: The Artist as Critic 1720 – 1820” from 2006 and “The Illustrated Shakespeare 1709 – 1875” from 2008

- Illustrations are important as they help the reader to understand the texts.  When someone reads a book for the first time, the illustrations help them form an overall impression.  The pictures often show the scenes that the artist thinks are important, says Sillars.

The power of the artist
But the pictures don’t just show what the readers saw when they opened their book 200 years ago.  The style and choice of picture also tells us something about what the artist thought about society.

- 18th century painters, for example, refused to depict Shakespeare in the way that the academics of the age wanted him to be portrayed.  Instead of painting scenes from scholastic performances, they found inspiration in historical events mentioned in Shakespeare’s texts, and in works of art from the same period of time as the plays, says Sillars. 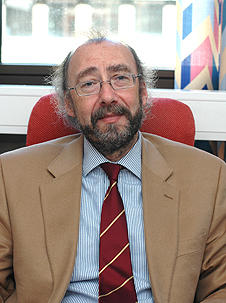 - There is more than one Shakespeare. Illustrations and paintings play an important role in providing a cultural impression of the English national poet, says Prof. Sillars. His last book “Shakespeare: Time and the Victorian Visuals” has four hundred pages, 32 pages have colour pictures and there are 120 pages of black and white illustrations. The book is based on his two previous books, and will be published by Cambridge University Press.
Photo:
Kim E. Andreassen 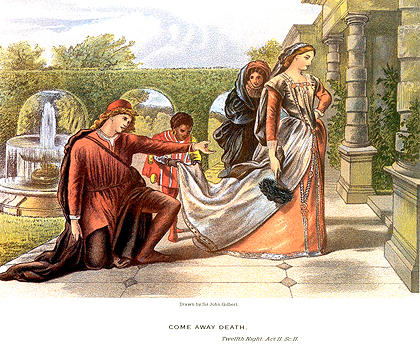 Here we see John Gilbert’s illustration from Twelth Night, published in 1875. The passage of time is depicted by the different ages of the four characters and the failing light, which echoes the song title of the picture: Come Away Death. 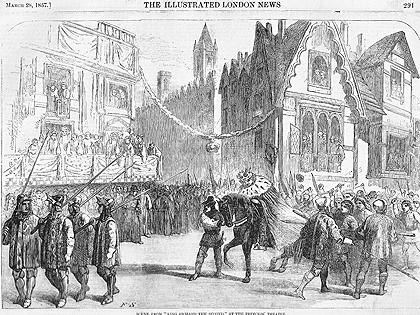 This is an engraving by Charles Kean for his 1857 production of Richard II. The picture depicts the deposed king’s arrival in London, and shows the artists attention to historical detail. The engraving changed the staging of the play. A third of the script was cut so that this scene could be included.