The order of the genetic hereditary material in animals can have been formed quite by chance, new research shows.

About ten years ago, researchers managed to map the entire human DNA sequence.  Gradually, as descriptions of the genomes of other animals became available, they saw that there were many similarities between the various hereditary materials.   Many genomes are found in all animals and it was found that the DNA sequence was partly identical among animals that were related.

Scientists assumed therefore, that the old genetic architectural structure is important, and that it has been actively preserved through the process of natural selection.

But discoveries made by the Sars Centre at the University of Bergen and the French genome centre Genoscope, have turned this notion upside down. They have mapped the genome of Oikopleura dioica, and results show that the genome structure differs radically from that of many of the species that it shares common features with.  The researchers have concluded that this could be due to neutral evolutionary forces, in other words – by chance.

- There is no proof to support the notion that the architecture found in most genomes is optimal, and that it has evolved gradually through the process of natural selection.  We have on the other hand shown that the original genome architecture can disappear when evolution is very fast, says Daniel Chourrout.

The results were released yesterday evening in a news report, by Science.  The entire report, consisting of 100 pages, will be published by Science a month from now.

Rapid evolution
Scientists found the new results by studying an animal that reproduces quickly, but which is also highly advanced.

Oikopleura dioica is a tiny animal that is found in large numbers in all of the oceans.  At first sight, it doesn’t appear to be a close relative of mankind. But this is a chordate, and a member of the tunicate family, which are a sister group of the vertebrate family.

While most species that have already been sequenced have a long reproductive period, the Oikopleura has a very short life cycle of just four days, which is quite unique for such a complex animal.  This makes it a perfect object for research.  Evolution happens quickly when the reproduction period is so short.

Non-coded sequences
One of the Sars group’s most amazing discoveries was that the position of the introns – the non-coded sequences along the DNA string, which separate the genes – differed from that of all of the other animals that had been examined.

Most of the introns in the hereditary material that has been examined are ancient and it’s difficult to ascertain where they originated.  This is why scientists thought they were so important, that they are preserved by the process of natural selection.

- We discovered that many of the introns in Oikopleura had been replaced and that most of the old introns had disappeared.  The genome has the usual number of introns, but they are not the same – they are new, says Chourrout.

The scientists discovered that in some places, some of the introns were practically identical and they believe that some sequences can have been copied, and that some have been moved to another place in the DNA string.

- Introns changing places happens very often with Oikopleura and this is the most dramatic of our finds concerning this organism, says Chourrout. 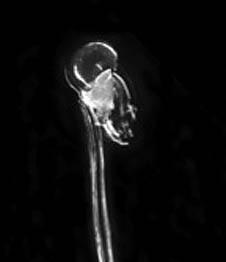