Digital tour of the UiB

UiB researcher, Jill Walker Rettberg, has produced a digital guide of the university campus which can be accessed by cell phones. There is some uncertainty however about which direction the technology behind the programme is taking.

You can now take a guided tour of Nygårdshøyden that includes university buildings and landmarks, with the aid of a smart telephone and a programme called Gowalla.  You use your cell phone to check in at each place to get a little written information. You can write a message and even send a picture if you feel like it.

Click here for a guided tour of UiB on Gowalla.

Jill Walker Rettberg says that she made the guided tour in order to test Gowalla’s potential.

- I like it when one can see that other people have been to a place and one can get an idea about what they thought about it. I would appreciate something like this being available if I visited another university, she says.

The experiment is aimed at guest lecturers, and new students and employees. But perhaps most of all at the hard core of people that already use Gowalla.

Technology on the spot

Gowalla uses the GPS function on smart phones to continuously update information on objects found in the area.  These objects, that can be buildings, restaurants or landmarks, have been added to Gowalla by other users.

- I would estimate that there are several thousand Gowalla users in Bergen, says Walker Rettberg.

These users add other people to the programme as friends, and can then keep themselves posted on their whereabouts and what they are doing.  And it is also possible to take round trips such as the one that Walker Rettberg has made of the UiB campus area.

Walker Rettberg says that she is sometimes sceptical about placing information about her whereabouts on the internet.  But she can see the advantages that this technology gives.

- That it’s possible to see where other people have checked in, is almost like being present.  Suppose you knew that your grandfather had studied somewhere, and could search the university campus and see him walking around and read his comments.  At the moment it’s impossible, but perhaps it will be possible sometime in the future, says Walker Rettberg.

She is not sure that Gowalla will survive and is toying with the idea that The National Library of Norway should have an archive over the movements of Norwegians on Gowalla, for future reference.

Walker Rettberg is conducting research on digital culture and social media, and attended a meeting about Gowalla, with guest researcher Clare Hooper of the University of Southampton prior to this interview. 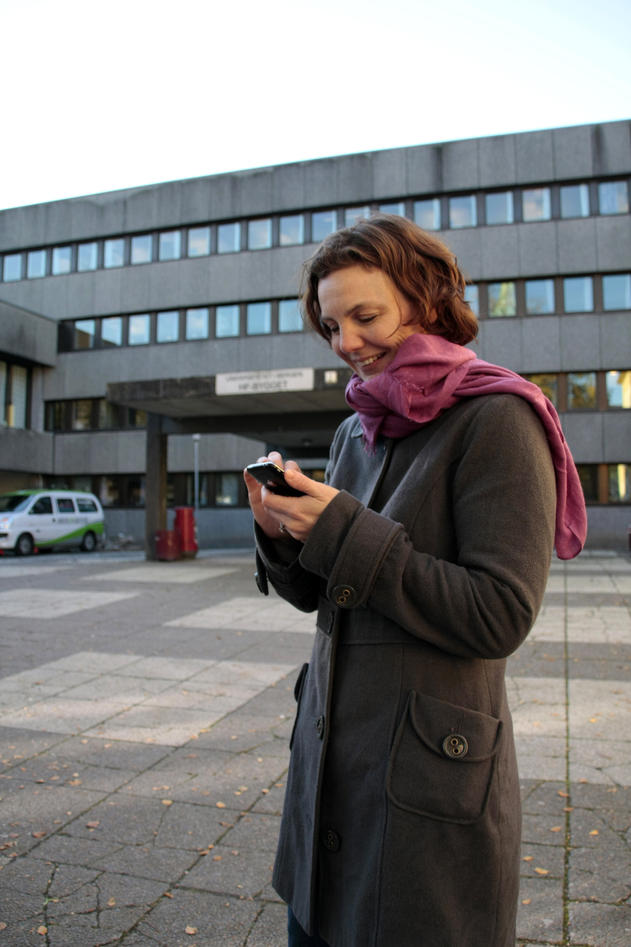 - It makes me happy when I see that people have checked into somewhere that I’ve placed on Gowalla, says Jill Walker Rettberg. Digital visits have already been made to several of the places on the UiB round trip, by people using the GPS based programme.
Photo:
Walter N. Wehus