The Research Council of Norway has allocated 210 million NOK to funding research equipment. A lot of this money will come to Bergen.

There are four national projects that will benefit from this allocation of almost a billion NOK during 2009 and 2010.  Among them is the Geophysical Institute at the University of Bergen, which will receive 18 million NOK for a remote control system for ocean surveillance.

There is in fact talk of six remote-controlled vessels that will monitor the North Atlantic, from Stadt to Lofoten, and provide data for marine research, climate research and eco-system research.

- This is the modern method of monitoring variations in temperature, salt and even the speed of the current.  Eventually, it will be possible to place sensors on vessels and measure other things as well, says project leader Peter Haugan.

The vessels are about one and a half metre long, weigh around 70 kilo, and look like model aircraft.  They are steered by remote-control and partly by automatic pilot, and can go as deep as a thousand metres below sea-level.

-They leave land; head out towards the deep-sea, before turning and coming back.  En route, they send data by satellite whenever they surface, says Haugan.

This type of measurement used to be carried out by ships that lowered measuring equipment attached to a wire.  Buoys that drift with the current have also been used.  Although according to Haugan, these do not always end up in the right spot.

- But these vessels can be steered and use little energy.

The Institute of Marine Research received 13 million NOK last autumn from the Research Council of Norway, to replace the weather ship Polarfront with a weather buoy.  The new project will strengthen ocean surveillance even further.

- This is an infrastructure initiative that we will be responsible for, but that will be available to all Norwegian marine researchers.  Researchers can use the data and define special surveillance campaigns, since the vessels can be remote-controlled by several methods, according to what one is looking for, says Haugan.

The Research Council of Norway has also decided to give 80 million NOK to upgrade the Norwegian bio banks in a common research infrastructure.  This project is important for the Universities of Bergen, Tromsø, Oslo, Trondheim, the Norwegian Institute of Public Health and public health enterprises.

45 million NOK goes to Christian Michelsen Research. This will be invested in a floating test turbine which will be used for measuring and testing individual components in offshore windmills.

The final 65 million will be used to modernise the scientific equipment used in the field of nanotechnology.  The applicants were NTNU, SINTEF, UiO and Vestfold University College.

The Research Council of Norway’s national commitment on research infrastructure which lasts from 2008 to 2017 is financed by the proceeds from a Research Fund investment of 7.3 billion NOK. 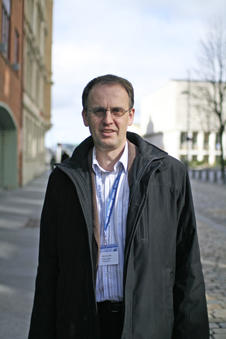 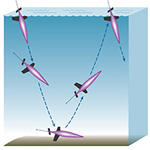 Illustration: These vessels can dive, steer and surface without the aid of a propeller. They use little energy and can dive to a depth of a thousand metres.(Illustration: forskningsrådet.no)