A substantial number of applicants

There is an increase of four percent in the number of students wanting to study at the University of Bergen in 2010.

The Faculty of Law and the Faculty of Psychology have had a marked increase, while media subjects have lost ground.

This is the largest number of applications received by UiB since the upstart of the national system for co-ordinated admissions.

- We are doing quite well compared to the other universities.  It’s gratifying that UiB has become more visible.  It confirms that we are going in the right direction, says Kuvvet Atakan, Vice-Rector for Education.

Both the University of Oslo (UiO) and NTNU have each had a reduction of 2.2 percent in the number of students applying to study.

Law up, Social Sciences down

25 percent (304 persons) more want to study at the Faculty of Law (JUS).  Faculty employees have reacted strongly to the difficult financial situation, since the faculty budget for 2010 was made known at the beginning of the year.  Both employees and students have written letters to På Høyden expressing their concern that the situation can affect study quality.

It doesn’t seem to have deterred applicants.

- There are probably several reasons for this.  On one hand, it’s a challenge that the faculty has so many students, and the employees are cramped for space.  On the other hand the faculty has achieved a lot and is very quality-conscious, says Atakan.

The situation for the Faculty of Humanities is more or less unchanged at 0.3 percent (6 persons). The Faculty of Mathematics and Natural Sciences has had a slight increase of 2.3 percent (21 persons).

Applications to media subjects at UiB, such as journalism, film and TV have gone down by 17.5 percent (121 persons).  Atakan thinks this is due to the fact that there is a general opinion that it’s difficult to find work in the media sector.

-Applicants hear that the employment situation is difficult and this makes them reflect on whether or not they will be able to find employment after they have completed their education, says Atakan.

However, he thinks it would be incorrect to conclude that the professions are advancing at the expense of previously more popular subjects, such as media and information, as both dentistry and medicine have fewer applicants than before – 6.8 percent less each.

Aesthete studies are one of the areas that stand out. While there is a national decline of 7.2 percent, UiB has an increase of 68.2 percent. This is due largely to a huge interest for digital culture and the new music-therapy study.

Kuvvet Atakan has noticed that there is an increase of 2.3 percent (21 persons) in the number of applicants to science studies.  He thinks that this is most likely due to the national focus on science subjects in recent years.

- It’s really good that there are more applications to study science subjects.  There was a noticeable increase of almost 13 percent in some subjects last year.  We were anxious that the increase in 2009 was a one-off, but so far it appears to be lasting, says Atakan. 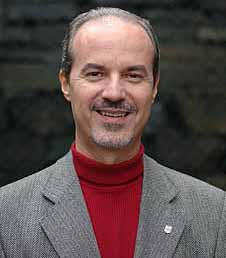 - It’s gratifying that UiB has become more visible. It confirms that we are going in the right direction, says Kuvvet Atakan, Vice-Rector for Education.
Photo:
Kim E. Andreassen