Thorsen is professor at the Department of Biomedicine at the University of Bergen. He also holds a twenty percent position as a professor at Qilu Hospital of Shandong University, in Jinan, China.

The professorship in China is a result of the collaboration between UiB and ChiNor Research Laboratory at the chinese university, which was established 15 years ago by Professor Rolf Bjerkvig, says Thorsen.

ChiNor conducts research on glioblastoma, a cancer that occurs in the brain. In 2018 Thorsen decided to establish a separate lab here, focusing on the spread of cancer to the brain, so-called brain metastases. This makes Thorsen the only Norwegian and perhaps Western researcher in this field in China. Thorsen thinks the collaboration is special:

"Chinese laboratories have a high level of competence and good access to resources and infrastructure. They are also very skilled in conducting animal experiments" says Thorsen.

In recent years, Thorsen has done a lot of research on how skin cancer is spreading to the brain. That is because Norway is the county with the highest rate of skin cancer in the world. Their research is using laboratory mice.

"We study how the cancer spreads to the mouse brain, and test new therapies" Thorsen explains.

The mortality rate for patients who have brain metastases is high. According to Thorsen, it is difficult to treat the cancer in the brain. In order to conduct good clinical studies, researchers need access to samples from patients who have had brain cancer. They have a lot of that in China, according to the researcher.

"In China, skin cancer does not occur as often as in Norway, but there is a relatively high incidence of lung cancer patients. Everything is ready: We collaborate with a neurosurgeon who informs when patients with brain metastasis are to be operated on. From there we can pick up samples that are processed for our research" says Thorsen.

"We have done a lot of research on exosomes. Exosomes are small vesicles that all cells emit, which are full of proteins, DNA and RNA. We previously thought that these were small "garbage bags" that the cells shed. But now we know that cancer cells send out exosomes with microRNA that increase the growth of brain cancer. If we manage to find a way to "knock out" the microRNA in the experimental animals, there may be a possible new treatment against the spread of cancer to the brain" the professor says.

Thorsen applied for funding from the National Natural Science Foundation of China and was awarded 550,000 Chinese yuan over four years. This corresponds to about 200,000 NOK a year, but considering the value of money in Norway, the award is worth four times more:

"The grant is sufficient to maintain the current activity and is "the first foot in the door" to apply for bigger grants" Thorsen explains. 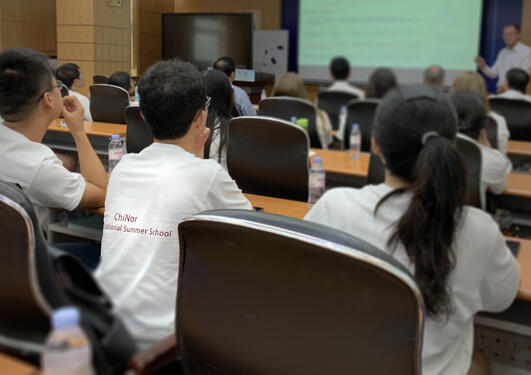 This summer, the Department of Biomedicine organized a joint summer school with the Cheeloo College of Medicine at Shandong University in China.