The two faces of the pancreas

A new publication from the University in Bergen shows how a mutation in the pancreas may cause the diabetes-related disease CEL-MODY. Illustration photo: Colourbox.

The pancreas has two main functions: production of digestive enzymes which break down the food in the intestine, and secretion of hormones that regulate the blood sugar. Researchers at the KG Jebsen Centre for Diabetes Research study a rare, hereditary disease where both of these functions are affected. New research results from the center help to increase the understanding of how different pancreatic cells interact with each other.

The disease CEL-MODY origins in the enzyme-producing cells of the pancreas and leads to a reduced amount of enzymes in the intestine. This implies that normal food absorption is disrupted and the patients get digestive problems at a young age. Eventually, the cells producing the hormone insulin are destroyed. As a result, the patients develop diabetes when they are 30-40 years old. The remarkable observation is that CEL, the protein that is damaged by the disease, is expressed only in the enzyme-producing cells and not in the cells that produce insulin. Why is then CEL-MODY dangerous for the important insulin-containing cells?

This was the question that puzzled researchers Janniche Torsvik and Bente B. Johansson in 2008. And now, after years of comprehensive investigations, they think they have found the answer. The results of their research was recently published in Journal of Biological Chemistry, one of the world’s leading journals in biochemistry and molecular biology.

Torsvik and Johansson believe that the disease can be explained by a mutation that changes the structure of CEL, causing this protein to be taken up by cells in the pancreas. This affects both cells that make the CEL protein themselves and the nearby cells that produce insulin. Eventually the cells are damaged because of the negative effect of the mutant protein. In the long run, this may lead to reduced secretion of insulin and diabetes.

- In CEL-MODY, the gene that encodes the CEL protein is mutated, Johansson explains. This causes the protein to become lumpy, and these lumps can stick to the outside of the cells (image1).

- We noticed that other kinds of cells, including the insulin-producing ones, then can “eat” the lumpy CEL-protein in a process called endocytosis (image 2), Torsvik continues. ‒ And when these cells have absorbed the CEL protein, they are not doing well and die more easily.

The study was led by professors Anders Molven and Pål R. Njølstad, and has mainly been funded by the Bergen Medical Research Foundation and the Kristian Gerhard Jebsen Foundation. Researchers from three departments at the Faculty of Medicine and Dentistry, University of Bergen have been involved. Molven explains that Torsvik and Johansson with their research have taken a significant step towards understanding the CEL-MODY disease at the molecular level.

- Their results also emphasize the significance of studying the pancreas as an organ in which the enzyme- and hormone-producing cells affect each other. It will be exciting to see if similar endocytotic processes as observed during our work, are involved in type 2 diabetes, the most common form of the disease, Molven concludes. 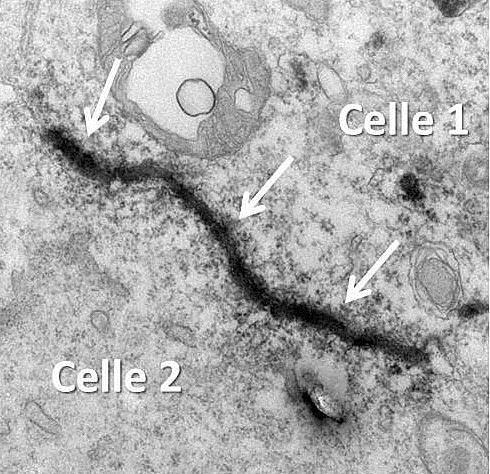 Image 1: The mutant CEL-protein has aggregated, the arrows showing how it aligns at the membrane between two cells.
Photo:
Bente B. Johansson, The Molecular Imaging Centre (MIC), UiB 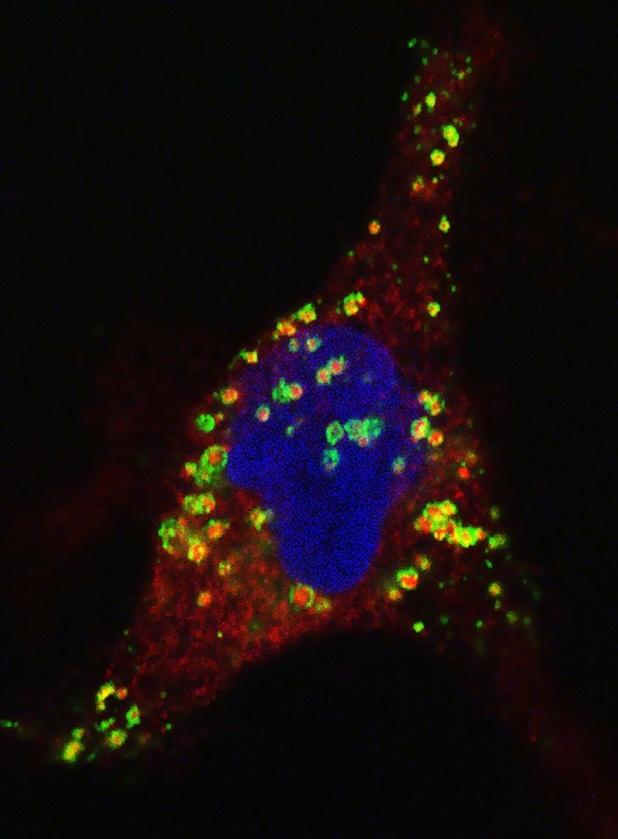 Image 2: A cell that has absorbed mutant CEL-protein. The protein has been visualized as red dots surrounded by a green membrane.
Photo:
Janniche Torsvik, The Molecular Imaging Centre (MIC), UiB