Sharing the fun of numbers

“It is very hard for me to accept that people do not understand Mathematics. For me it is like they are saying they do not know how to read, says young researcher Sofia Tirabassi.

In August 2015, the 31-year old Sofia Tirabassi became new associate professor at the Department of Mathematics at the University of Bergen, where she works in the Algebraic Geometry group at the department.

On February 2012 Sofia Tirabassi completed her PhD degree in Mathematics at Università degli studi Roma Tre. After that she was a Marie Curie Fellow at Faculty of Mathematics, Informatics and Mechanics, University of Warsaw in Poland. The last two years she spent as a Postdoctoral Research Assistant Professor at the Mathematics Department of University of Utah.

Why did you want to come to Norway and Bergen?

“UiB believed in me, offering me a permanent position just after three years of my PhD-graduation, allowing me to expand my research horizons. The department, especially the pure math area, is really active even if small. The size is far from being a negative aspect: in order to get things going everyone has to do his or her part. Therefore I am already involved in the life of the department as the webmaster of the new Algebraic Geometry webpage and I sit in PhD defense committees. This allows me to grow in my new role as a regular faculty without too much stress and pressure,” says Tirabassi.

Not acceptable not to understand mathematics

Tirabassi chose algebraic geometry and homological algebra as her path, and she does not agree with the common assumption that it is acceptable to not be good in mathematics.

“In my opinion many teachers do not even like mathematics, and then it is hard to inspire students. I got my early stimulation from my parents, if it was not for them I do not think I would have liked mathematics as much as I do. It is too late to get people to like mathematics at university level; it has to happen at high school,” Tirabassi believes.

What do you think of the common assumption of mathematics?

“It is sad that it more acceptable for a young girl to say that she does not understand mathematics, when this understanding has nothing to do with gender or biology. For most people, mathematics is only to be understood if you put effort in it,” says Tirabassi.

“Mathematic knowledge is so important for all the things that surround us. It is impossible to understand the algorithms of Google without an understanding of mathematics.”

Discovering the fun of mathematics

Italy has one of the highest representations of female researchers in mathematics in the world.

“One of the reasons is that you have to have a bachelor degree in mathematics to teach in high school and that way they get a lot of women to enrol. In my mathematics class there were more women than men, but most of the women had teaching at high school as their career goal. But after three years of mathematics they changed their mind when they discovered that the mathematics was very cool and that they would rather learn more and become researchers. At UiB the researchers are expected to teach students as part of their academic work. This is an important part of the research-based education the university offers. As much as she loves her research, Tirabassi is also excited about this part of her work.

“I love to teach, it allows you to understand the things you know. It is also inspiring to hear that I canmake an impact with my teaching. The best compliment I have got is a student saying “I always thought that math was difficult, but your teaching has made me understand.”

Sofia Tirabassi has received quite a few travel grants over the years, but she is most proud of the Simons Travel Grant she got in 2013. This grant is awarded by the American Mathematical Society (AMS) to  promising mathematicians at the early stage of their career (within four years from PhD graduation) and the award funding is to be used in two years for travel expenses.

“I am really proud of having won one of the Simons Travel Grant since it has an enormous pool of applications: all young researchers employed in US institution or having US citizenship can apply.”

The 31 year old researcher has already published a fair amount of research papers, but she has high ambitions for publications in the future. Tirabassi wants to be published in the Journal of Algebraic Geometry, a quarterly distributed by the American Mathematical Society.

Other than her parents, many professors have inspired Tirabassi over the last few years, in particular Professors Aaron Bertram and Christopher Hacon at the University of Utah.

“They were mentoring me in Utah, and for me they were superstars. The way they solved mathematical problems was amazing and compassionate,” says Tirabassi.

She is hoping her research will have an impact on her field, but also the way we look at mathematics in general.

“My ambition is to be a role model for younger generations and change the world with my example.”

Raised on bread and science

Tirabassi was born in the university city Bologna in Italy, in a home surrounded by books and knowledge. As a child Sofia loved reading, but her interest was reading comics. Ever since she was a young girl she has been attracted to the power of numbers.

“As a daughter of two physicians I was raised on bread and science”, says Sofia Tirabassi.

“My parents decided to reward me for reading books. For every third book I read, I got to read a comic book.  After a while I also loved books. I think early stimulation is extremely important.”

The Bologna wonder child grew up, worked hard and won scholarship. In her fourth year of high school she attended an exchange programme in the United States.

“During my year in the US, my interest for mathematics grew. I learned more about calculus and after that I really and truly fell in love with mathematics”, she says.

When she first enrolled at the University of Bologna, she had already decided to make studies her work – and to become a researcher.

She says that she never felt any pressure from her parents, only inspiration. She lived at home for her first years of studies.

“When they discovered that I wanted to live a life in research they started pushing me away to make sure that I was not too attached. When I was not to attached I could focus completely on a career in science” says Tirabassi.

Tirabassi met her Italian husband, Lawrence, in her mathematic studiesin Italy. She was lucky he also wanted to support her goal of a life in research and he followed her to Utah two years ago and to Bergen in August 2015.

“We both decided to focus on my career, and I am really grateful for his sacrifices.”

Like many other scientists Tirabassi considers herself a nerd. On her homepage Tirabassi has posted an online test showing a result of her being a 99 per cent nerd.

Most of Tirabassis friends also have an interest for science.

“My friends have the same interest and professions as myself, and in many ways we are the nerds from the TVshow The Big Bang Theory, says the young associate professor.

Still she is also questioning the social myth of being a scientist.

“There are many myths about us scientists that we are not very attractive and have problems with interacting with people, which is not true. We can be completely balanced and also interested in science.”

Position: Associate professor in the department of mathematics at the University of Bergen, the Algebraic Geometry research group. 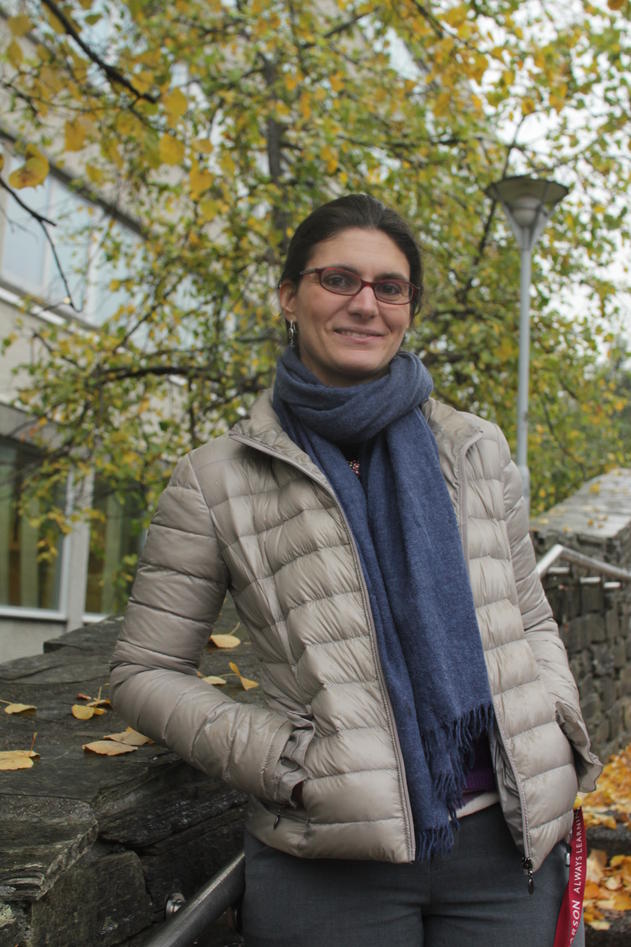