Knut Martin Tande at the Faculty of Law bought some trainers and sped up the pace of digitalisation. Now he and the academic leadership of the faculty have received the Learning Environment Award for 2016.

AWARD WINNER: Knut Martin Tande has boosted the digitalisation of teaching at the Faculty of Law. Here from a recording in the faculty's studio.
Photo:
Emil Weatherhead Breistein

"The goal is make the students more active. Digital lectures allow us to add some new elements and the students to steer their own tuition to a greater degree," says Knut Martin Tande, an associate professor at the Faculty of Law.
On Tuesday, he, together with the academic leadership of the faculty, received the Learning Environment Award for 2016.

Dragefjellet Centre of Learning and Communication is the Faculty of Law's centre for the development of digital teaching and research dissemination. The centre opened in spring 2015. Both the content and the creativity of the video production from the centre have developed very rapidly, thanks in large part to the enthusiasm of Tande. He has edited much of the video material from the lectures in his spare time and colleagues report that he actually bought some trainers in autumn to really speed up production.

However, he is not the only one behind the changes, the faculty's academic leadership, which Tande has been part of for many years, has been heavily involved.

The jury says: "The faculty has proved highly capable of and very willing to accept the consequences of the changes that have taken place and that are taking place, both in the working life the faculty's graduates enter and when it comes to how teaching and learning happens in today's reality, with the growing demand for independence and critical thinking."

"We have to take our students seriously. They are used to a digital reality and so we must also give it to them," says Asbjørn Strandbakken, Dean of the Faculty of Law.

The Faculty of Law's project in the last year has involved recording lectures and seminars in auditoriums and classrooms, as well as special video productions that are available to the students. These could be recordings of conversations between two professors or reviews of laws recorded in natural surroundings. An example of the latter is the webcast of the book launch of the third volume of the history of the Supreme Court (Norwegian only).

The centre also has its own studio in which all the faculty's teaching staff have had a chance to test and record their educational videos with professional backgrounds of the sea views from Sydnes.

"The response from students has been very good. This is something they want more of. The teaching staff is also very pleased with the quality of the videos being used and wants to contribute," says Tande. 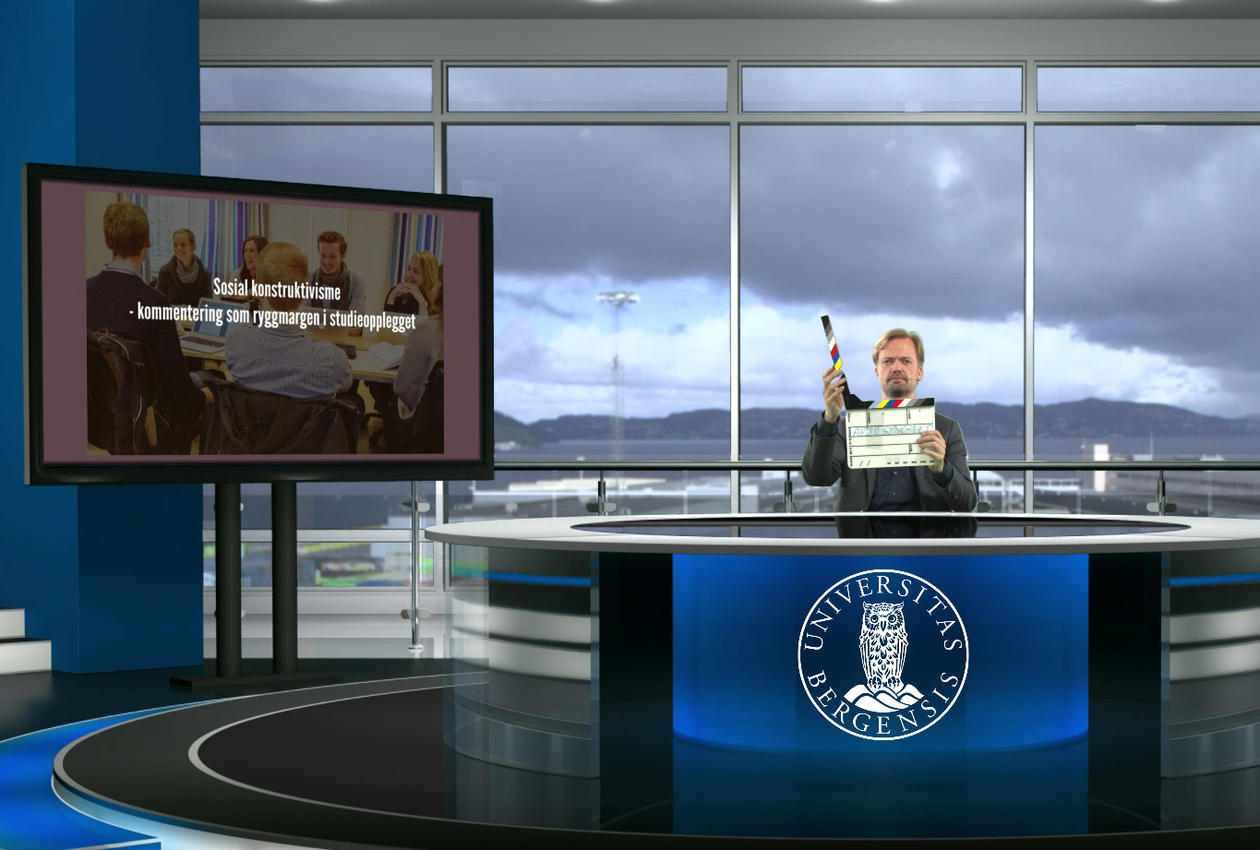 IN THE STUDIO: Knut Martin Tande in the faculty's virtual studio.
Photo:
Dragefjellet Centre of Learning and Communication (DLF)