Sarah Uffelmann Szeltner has investigated the concept of grammar in Ludwig Wittgenstein´s writing. – He wrote like a poet, Szeltner says.

AT THE WITTGENSTEIN ARCHIVES: Sarah Uffelmann Szeltner did her PhD in Bergen, at the archives after world famous philosopher, Ludwig Wittgenstein.
Photo:
Kim E. Andreassen

You have done a genetic-philosophical investigation on Wittgenstein and grammar? What does this imply?

Well, I looked at Wittgenstein’s notion of grammar. He uses it not in the way it is commonly used, so I wanted to find out how he actually uses it.

And what did you find?

I found out that his concept of grammar changes in the course of his work. In the early 1930s Wittgenstein had conceived of grammar as a complete system of the rules for our use of words. He slowly started to move away from this conception when he realised that our language is not completely governed by rules, but that we often make up the rules as we go along with using language. The system of rules for our use of words is not complete and does not even consist of general rules. Thus, Wittgenstein gave up the idea of a theory of grammar and focused on how we use language in our everyday practices.

How has the fact that Wittgenstein only published one philosophical book during his lifetime: The Tractatus Logico-Philosophicus, (which he wrote while fighting in World War I) affected your thesis?

During his lifetime he worked on a second book, but these writings were published only posthumously. My aim was to understand his concept of grammar against the background of his whole philosophical life. Later in his life, Wittgenstein was partly critical of what he had said in the Tractatus, but some of his essential views and aims did not change throughout his work.

Why did you choose this topic for your PhD-thesis?

I am interested in the relationship between language and the world. First I wanted to write about the realism-antirealism-debate, which means the questions concerning whether there exists an independent or objective reality, and whether (and if yes, how) we have access to it. I wanted to find out what Wittgenstein has to say to this, and if such distinctions even make sense for him. When I looked closer, I realised that Wittgenstein is concerned with the relation between grammar and the world, not language and the world. The concept of grammar, however, turned out to be very blurry and needed clarification.

Before I did my PhD I studied Philosophy and English language and literature. I came across Wittgenstein during my studies in 2007 when a friend brought him up repeatedly in conversations. Wittgenstein’s idea of logic as a language game fascinated me at once.

What part of the philosophical tree does Wittgenstein belong to?

He doesn’t fit into any category. People would often call him an analytic philosopher, but I don’t want to distinguish between analytic and continental philosophy. Besides, Wittgenstein was not only influenced by so-called analytic philosophers like Frege and Russell, but also by so-called continental philosophers like Nietzsche and Schopenhauer, for example. He was, if you want to give him a label, a philosopher of language and everyday practices. His style is also unique: he wrote small units of texts, called “remarks”, and compared philosophy with poetry. Terry Eagelton once said that Wittgenstein is the philosopher for poets and composers.

Is there any poetry in your thesis?

No, unfortunately this is not a poetic thesis. I have written a poem on Wittgenstein, but it is not for publication.

Has it mattered to you that Wittgenstein had a relationship with Norway?

Of course the fact that the Wittgenstein Archives are in Bergen was important to me. Not so much, however, that Wittgenstein himself was in Norway. But I was lucky for having been able to visit the remains of his house in Skjolden at the Sognefjord, and I can understand why he wanted to spend time working there; it is a very beautiful and inspirational place.

You have done a joint degree between University of Bergen and University of Kassel. In 2011 you moved to Bergen. Why did you choose to come here for your PhD?

First I came here on holiday in 2008 and fell in love with Bergen, but I didn’t think of actually moving here. But then I got acquainted with the work by professor Alois Pichler, who is my advisor on the dissertation, and I had the strong wish to work with him. What I have enjoyed the most about the University of Bergen is that PhD-students are much more integrated in academic life than in Germany. The Wittgenstein Archives, where my office used to be, is next to the master students’ reading room, making communication easy. In the German system, being a PhD student does not guarantee you an office. In Bergen I also got to know many other PhD-students in the humanities because of the course work that needed to be done in addition to writing the thesis. I really recommend taking a PhD here in Bergen. Now I can say that I have two homes, Bergen and Kassel.

And now you are sailing away from Bergen and academia?

Yes, I am now entering the “real” work life. I am going to work on a cruise ship as a tour leader. In my opinion, especially philosophers, who work so much with texts, isolated in their offices, need to experience life outside academia too. In a sense, my decision is also in line with Wittgenstein - I think he would approve.

The title of the dissertation:

”From system to use. A Genetic-Philosophical Investigation of the Concept of Grammar in Wittgenstein’s Philosophy"

A degree in Philosophy and English language and literature from University of Kassel, Germany

What are you doing now?

Working as a guide on a cruise-ship. 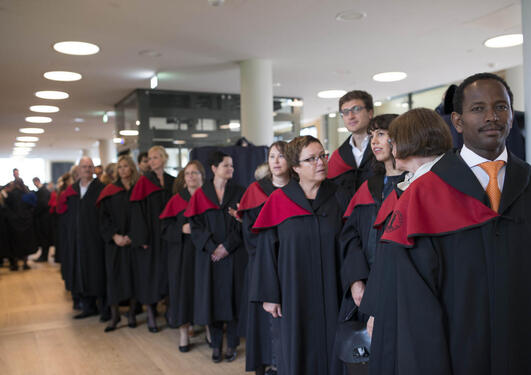 More than 250 doctoral candidates earn their PhD at the University of Bergen each year. Meet some of them in this series of Q&As.