Plastic oceans: What do we know?

At least eight million tons of plastic ends up in the oceans every year. A new exhibition at the University Museum of Bergen tells the story about the whale that showed the world how damaging plastic pollution is.

PLASTIC: This is some of the plastic that was found in the stomach of #plasthvalen, the whale who was found at Sotra, Norway in January 2017.
Photo:
Christoph Noever, Universitetet i Bergen

When researchers from the University of Bergen opened the stomach of the whale found at Sotra, Bergen in January 2017, they pulled out 30 plastic bags, and large and smaller pieces of plastic. The whales intestinal system contained no nutrition, the layer of fat was very thin and the weight was low for a whale of this size.

The University Museum of Bergen has opened a new exhibition about the plastic whale, where you can see the plastic found in the whales stomach and parts of the skeleton. The museum also presents the latest in research on plastic pollution.

One of the researchers contributing to the exhibition is Marte Haave, who has researched microplastics at Uni Research. Haave is also one of many researcher who expresses a wish to find out more about the plastic whale.

- Science does not have all the answers about plastic in the oceans. We need to develop methods and learn how to document how much plastic there is in the environment, where it is, and what consequences it has, says Haave.

The plastic will never disappear

Scientists agree that plastic in the oceans is a large environmental problem, even if we do not have all the answers.

- The consequences of seabirds, fish and other animals eating plastic, are well-documented. Is is for instance a well known problem that animals who eat plastic can hurt or clog the digestive tract, or get tangled up in plastic and become deformed or drown, says Magnus Svendsen Nerheim. He is a marine biologist, graduated from UiB and has researched plastic in the oceans.

- To get an overview of the extent of plastic pollution on a global basis, there has been conducted a number of studies where scientists have tried to determine how much plastic there is in the oceans. Considering that the ocean covers 70 % of the earths surface, it is very difficult to find a correct number, but even with very uncertain numbers, the amount is unimaginable. We also know that the plastic is never going to disappear, but is broken down to smaller and smaller pieces. When the plastic becomes small enough, it disappears from the surface of the oceans, and there are large quantities of microplastics on the see floor, says Nerheim.

Since 1950 the production of plastics has increased drastically, and in 2017 we now produce around 320 million tons of plastic a year. According to a rapport from the World Economic Forum, at least eight million tons of this plastic ends up in the oceans every year. That equals 15 tons every minute.

If we continue like we do today, by 2025 the ocean will contain one ton of plastic per three tons of fish. By 2050, there will be more plastic in the ocean, than fish.

Around 90 % of the plastic in the oceans come from dry land, and 10 % from shipping. A lot comes from industrial manufacturing, and a lot from ordinary consumers. The largest amounts come from areas with a lot of people, and where the recycling systems are poorly developed.

In the whale stomach, there were many large pieces of plastic, but also very small pieces. What do we know about these pieces? And what about the pieces who are so small that we can only see them through a microscope?

Microplastics are plastic pieces smaller than 5 millimeters. You can find these in skin-care products, tooth paste, they are used to remove rust from boats and machines, in medicine or industry. But most of the microplastics in the oceans are broken down from larger pieces of plastics.

Even if the plastic pieces are small, that does not mean that they are harmless, ecotoxicologist Marte Haave says.

- They can do great damage to the smallest animals. Microplastics can block the intenstines and lower the reproductive capacity in smaller animals. There has also been found evidence that nanoplastics has entered the circulation of crabs and blue mussels.

We still do not know if it could hurt humans to eat blue mussels or crabs with microplastics in their tissue, or if the smallest pieces of plastic could enter fish tissue. There is a great need for more research in this area, says Haave.

- What worries me the most, is that plastic will enter the entire food chain, and that everything we eat and drink will contain microplastics or nanoplastics. The pieces of nanoplastics are so small that they could potentially enter cells of animals. It has not been documented that this has happened, but it could be a risk if the plastic becomes so small that it can cross the cell wall and be transferred to predators and humans.

In plastics there are additives that could be harmful if they are released. Plastics could also absorb environmental pollutants are already excist in the environment. Researchers are trying to find out if and how these influence living things.

It is a well known problem for researchers that marine organisms can stick to plastic. In this way, the organisms are transported across large oceans and into ecosystems where they do not belong, and harm the animals and organisms who live there. But environmental pollutants couls also hitchhike this way.

Researchers at the Department of Biology have recently completed a study where they put cod in the water at Kollevåg in Askøy for about six weeks, to see if the fish was influences by environmental pollutants.

At Uni Research Marte Haave has researched microplastics, to be able to quantify how much there is in our local areas and what microplastics could lead to in the organisms living on the sea floor.

- There are plenty of scientists who want to research these things, but we lack the funding, she says.

- We know enough to act

Even if we do not know everything about the consequences of plastic in the oceans, Haave thinks it is crucial that we do not wait any longer before we start dealing with the problem.

- The most important thing now is to reduce the emissions. We have to replace plastic with other materials where we can. Half of the plastic made today, is made to be used only once. It is completely meaningless to use everlasting materials for things we only want to use once.

Marine biologist Magnus Svendsen Nerheim calls for the socioeconomic and legal perspectives in the discussion around plastic in the oceans.

- For every published study we see that our foolish use of plastic is creating a larger environmental problem. There are plenty of evidence that supports us thinking differently about how we use plastic. We have to make sure that it does not end up in the environment, with proper infrastructure for recycling, incentive schemes and/or recycling solutions that make it easy to choose sollutions that are environmentally friendly, and clear legal framework that holds manufacturers and consumers of plastic products accountable.

UiBs expertlist: These researchers can answer questions about the plastic whale 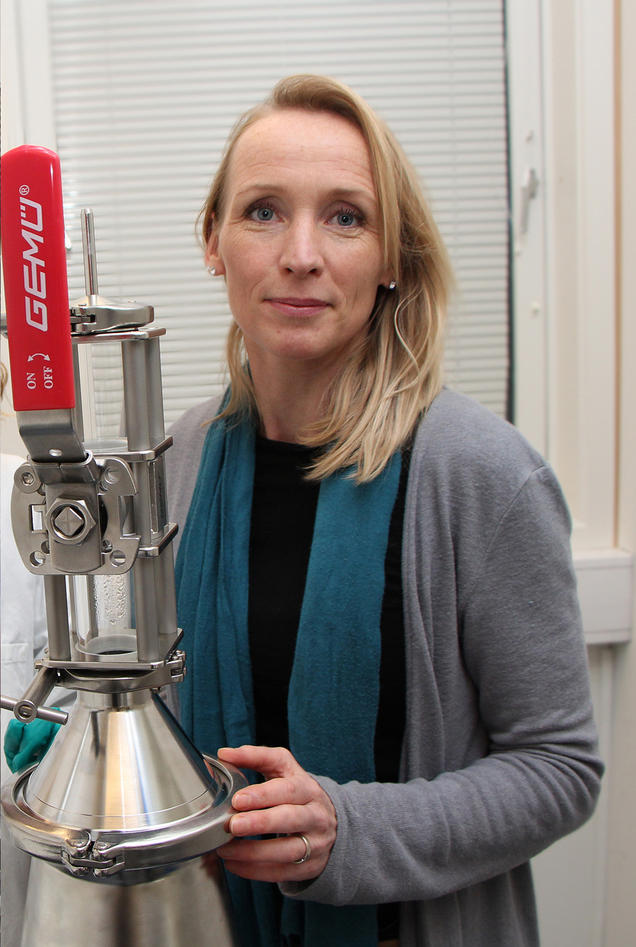 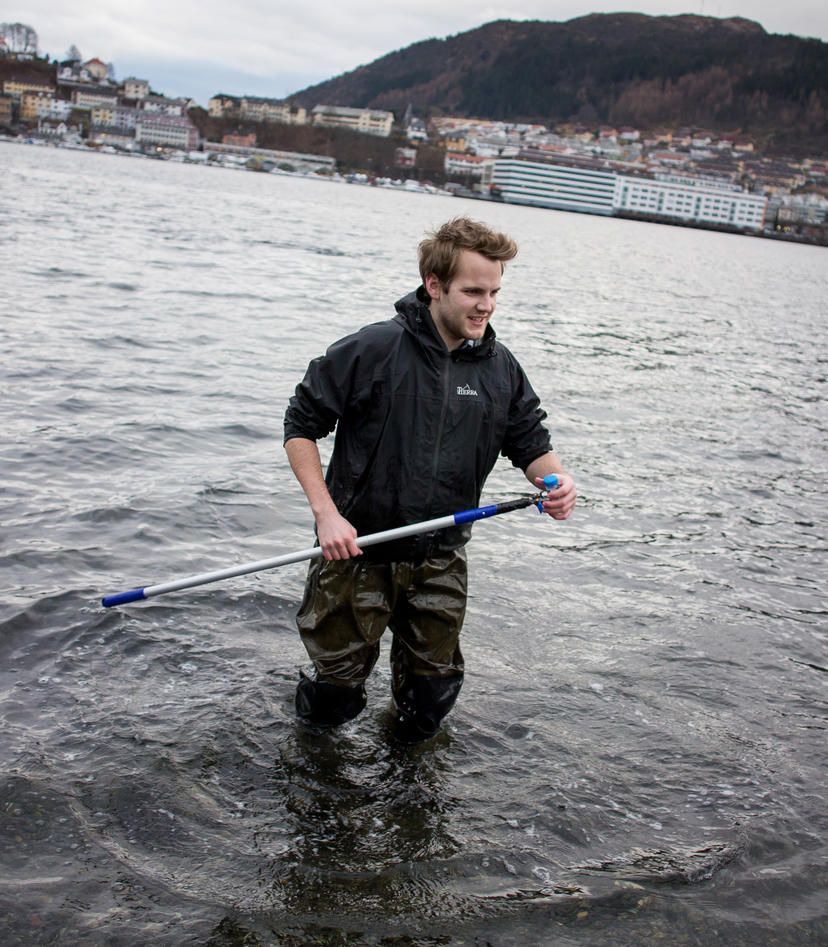 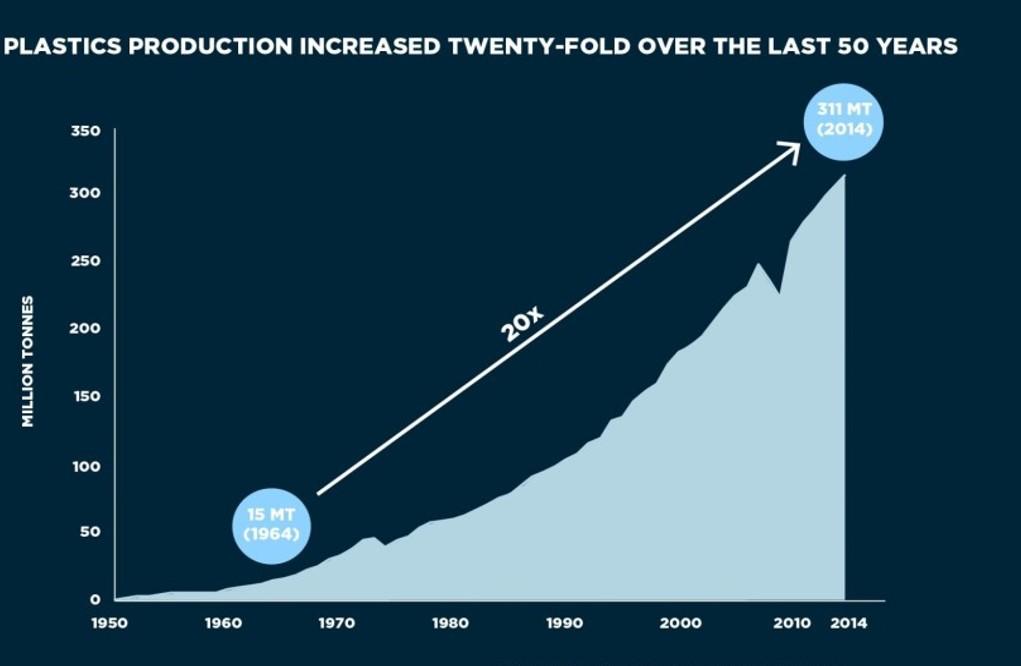 This shows how much plastic we have made every year since massproduction started in the 1950s.
Photo:
The Ellen MacArthur Foundation 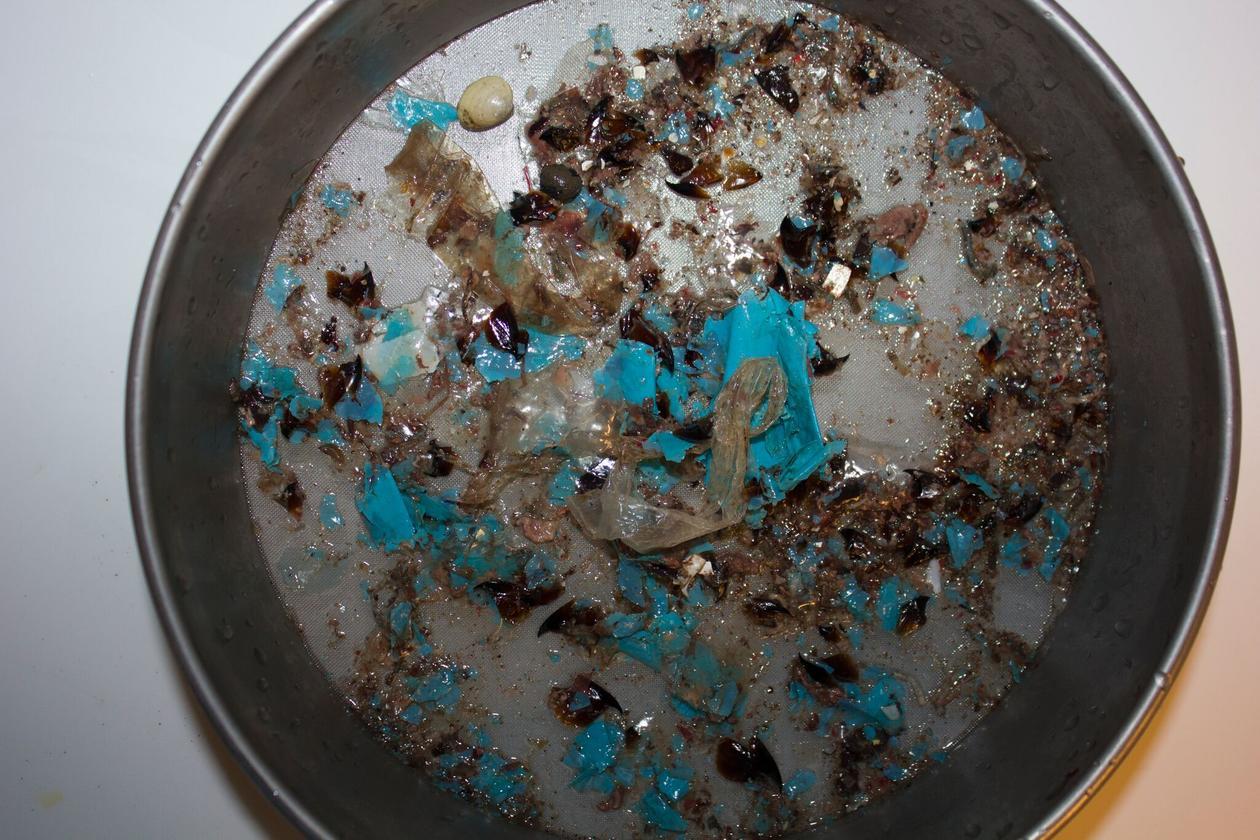 In the whales stomach there were found small pieces of plastic.
Photo:
Christoph Noever, Universitetet i Bergen 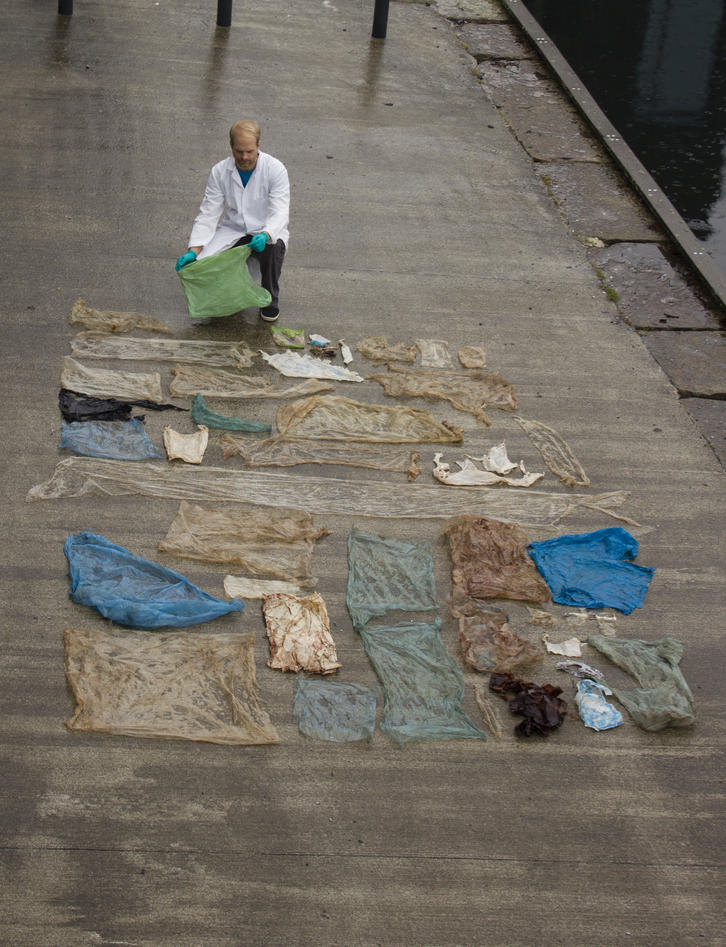 The plastic from the whales stomach is part of the exhibition at the University Museum of Bergen.
Photo:
Christoph Noever, Universitetet i Bergen 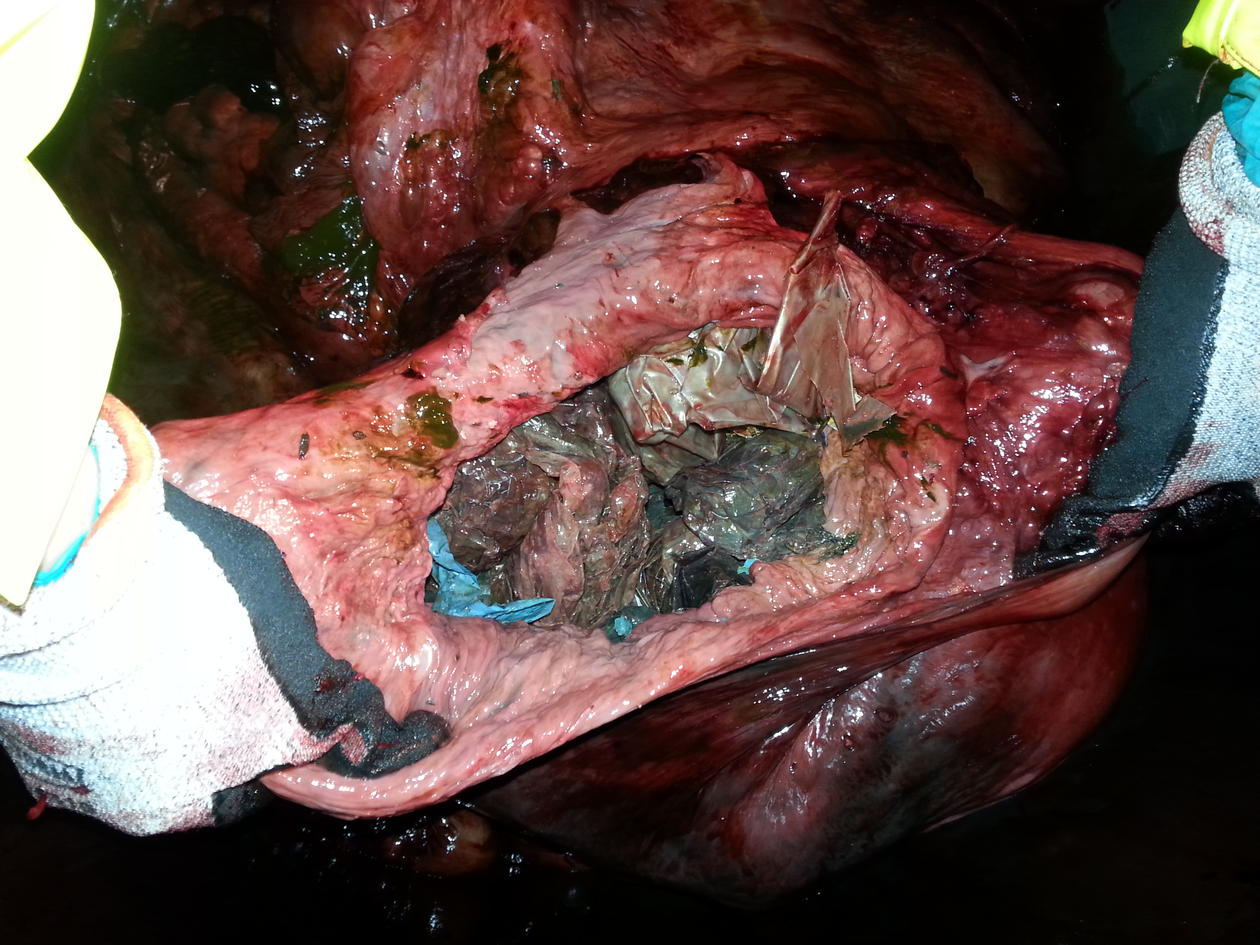 The researchers had quite a shock when they opened the whales stomach.
Photo:
Christoph Noever, Universitetet i Bergen 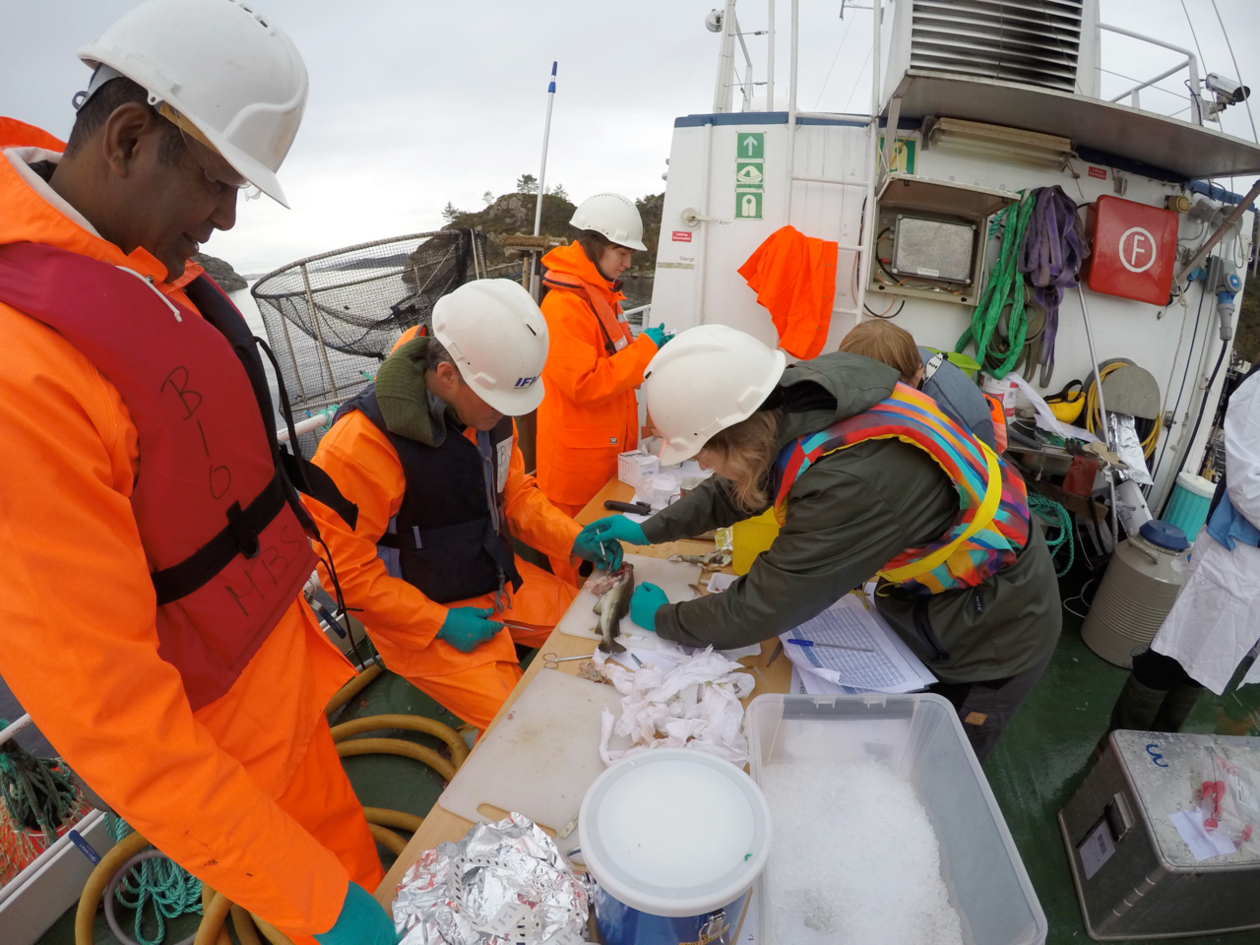 Researchers from UiB are collecting cod they placed at Kollevåg to look for environmental pollutants.
Photo:
Anders Goksøyr 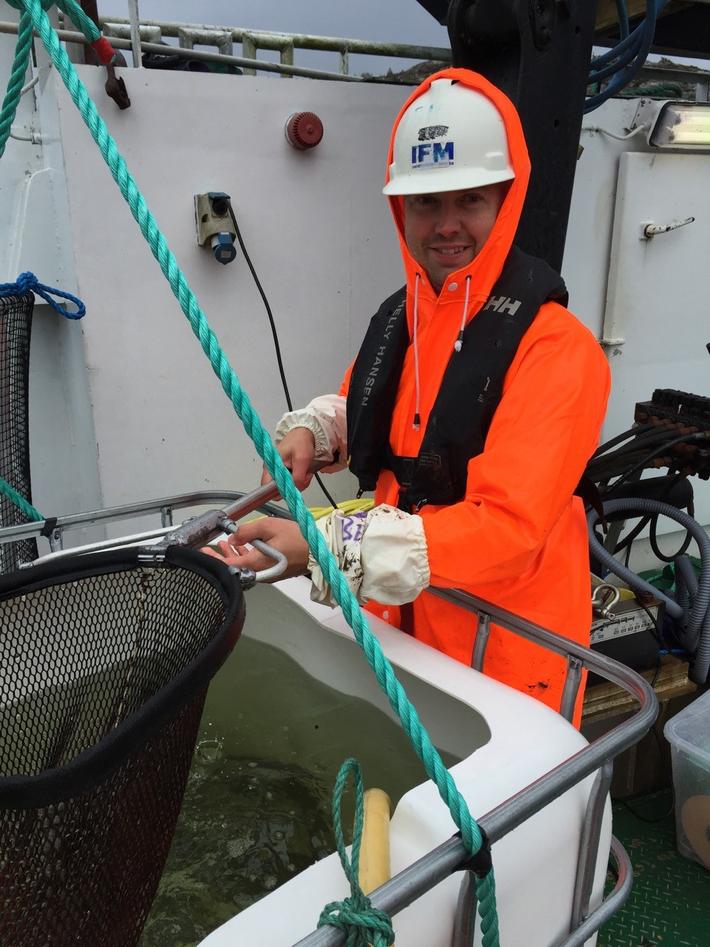