Researchers in psychology investigate our attitudes and actions towards energy transitions and climate change.

They aim to use psychological science to improve how humans interact with the natural environment - and the changes in it.

Our attitudes towards climate change affect our actions. Decisions like my own on recycling, trips to London by airplane, use of collective transport to work, and ultimately who I vote for, are all affected by my own beliefs and disbeliefs. Small decisions in the big picture it seems, but they accumulate to big changes.

We care more about climate change

- People in the western world tend to view climate change as a more serious threat to society and the world at large than for the individual as such. However, this seems to be changing now, says Gisela Böhm, professor at The Faculty of Psychology, University of Bergen.

-In Norway and Bergen specifically, the amount of rain is increasing. We see flooding and landslides repeatedly in different areas in Norway and heatwaves in our favorite holiday countries in Europe. These are all concrete examples that affects us directly.

She explains the shift in people’s perception by the experience we now have of the changes so much closer to us.

Informed but not alarmed

Böhm participated in an extensive international survey in Europe which examined how ordinary people view climate changes and energy transitions. It explores attitudes towards climate change, energy production and energy transition. The report «European Perceptions of Climate Change» looks into the comparison across Germany, France, Norway and Great Britain, and into how the respondents estimate the different measures taken in their own country. The study is unique in scope, and researchers cooperated with an international stakeholder panel in designing the study.

Böhm refers to one of the questions in the survey, asking the respondents when they think the changes will happen.

-A majority of the respondents answered that they can already feel the effects of climate change and see them with their own eyes, answers Böhm.

The countries in the survey consists of four of the most important energy producers in Europa.  They are important because decisions on infrastructure and politics in the energy area in these countries will be decisive to Northern Europe’s energy transition.

Conclusions from the report

In Norway people tend to have higher hopes in respect to climate change solutions, according to the report, and they come out with less fear, outrage and guilt than the rest of Europeans asked. The report also found that Norwegians are likely to view being environmentally friendly as an important part of Norwegian identity.

-I think we can explain lower fear by the mere fact that Norwegians are not affected to the same extent yet. As for the lower guilt response, we think there is a connection to the larger supply of renewable energy in Norway.

.. and they seem to have an image dilemma

An analysis of the socio-political context in the four surveyed indicates a cognitive dissonance in Norway. Norway seeks a climate-friendly image at home and abroad, while being unable to curb its domestic emissions and maintaining fossil fuel exports at relatively high levels. On the other hand, electricity is produced from hydropower and thus stems from a renewable source.

-Oil has played and still plays an important role in Norwegian society, and they are key providers of employment and energy, explains Böhm.

In this way it contrast to the image of the environmentally friendly Norwegian who is searching for new solutions. So, will my every day small decisions make any difference? Will current climate change as in more flooding in Norway affect us more?

-It definitively does, answers Böhm. The attitudes are changing now, as we see the climate changes coming up closer to us. When our attitudes change, so will our decisions and actions eventually.

Climate change is created by humans in the first place, our decision-making and our behavior

Psychology will help us in coping with climate change

The challenges are already here, and we are now trying to find ways to cope. Psychology will play a major role because human behavior is central to energy use and environmental preservation.

- Climate change is created by humans in the first place, our decision-making and our behavior, and these are central themes in psychology, says Böhm.

From psychological research, we have learned about different types of behaviors and their relative impact on energy use, the connections of values, beliefs, norms and behavior, and strategies that can make a difference in promoting a more sustainable environment.

- The relevance is obvious, and my focus has been on ordinary people and their daily life decisions. Moreover, the politicians also need the public to implement their policies, states Böhm.

The impact of our mental models

Böhm’s new project will use the results from the European Perceptions of Climate Change project to take a closer look at our mental models of climate change and energy. She and her colleagues will explore how the public plays an important role in the question of whether the transition to a low-carbon society can be successful. It is important to know how the public think about renewable energy and the different routes to achieve a low-carbon society.

-We want to find answers to how our mental models about climate change and energy transitions shape our understanding of the risks involved, concludes Gisela Böhm.

·        Focus on the connection between psychology and energy transition. How do our mental models influence our judgments, our understanding the risks involved, and our decision-making and actions. Project-page.

·        Project leader: Professor Gisela Böhm, Faculty of Psychology, University of Bergen. Eystein Jansen and Kjersti Fløttum, UiB, are also project leaders of one sub-project each in the project Pathways to energy transition. Böhm is co-chair of the Climate and environment segment of the Norwegian Citizen Panel, a national online survey panel, and part of the DIGSSCORE research infrastructure at the University of Bergen, and also part of a team of researchers that designed a survey module on Public attitudes to climate change, energy security, and energy preferences for the European Social Survey.

Financed by The University of Bergen’s “Akademia-agreement” (in Norwegian)

Education in Environmental psychology at The Faculty of Psychology

·        In several courses it is possible to write term papers on topics of climate change and sustainability, for example:

Programs at The Faculty of Psychology 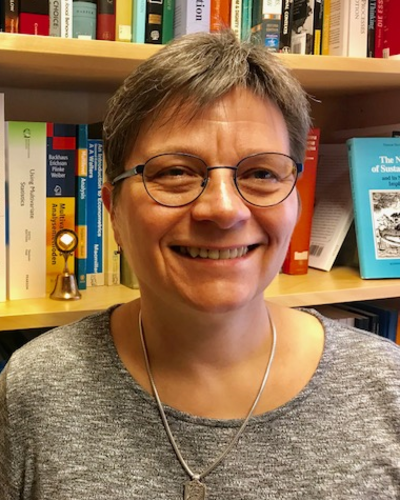