It was clearly a surprise, both to the audience and the laureate, when former US president Barack Obama was introduced on the big screen before the Holberg lecture June 5th.

Obama said he has known Sunstein since they were both professors at the University of Chicago. He focused on the laureate's influence on a broad range of fields in society.

“Cass, what a well deserved honor this is. What a tribute to your entire body of work, and the thread that runs through it; by commitment to the principles of liberty, equality, dignity and how we might constrain ourselves while promoting and protecting those principles", said Obama.

"It’s an honor to call you a friend. Not only because you are a towering intellectual, but more importantly, because you are a good man”, Obama continued, before Sunstein went on stage to hold his Holberg lecture, titled "Freedom".

Sunstein receives the Holberg Prize for his wide-ranging, original, prolific and highly influential research. Not only has his research redefined several academic fields; it has also had a far-reaching impact on public policy. In particular, Sunstein’s academic work has reshaped our understanding of the relationship between the modern regulatory state and constitutional law.

The Holberg Prize is worth NOK 6 million (approx. USD 740,000) and is awarded annually for outstanding contributions to research in the arts and humanities, social sciences, law or theology.

Sunstein is a Robert Walmsley University Professor at Harvard University. In 2009-2012, he served in the Obama administration as the head of the White House Office of Information and Regulatory Affairs. 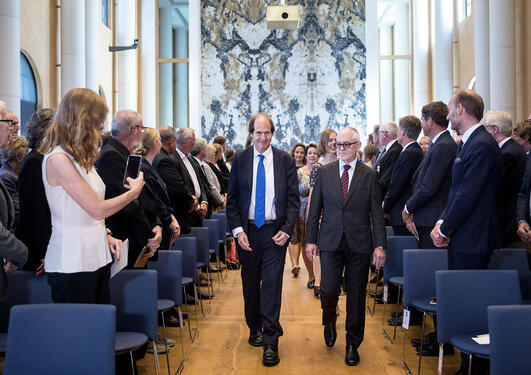