Getting ready for Antarctica

“I’m looking forward to going back into the field”, says PhD student Sonja Wahl, who recently returned from her first fieldwork on Greenland.

Sonja Wahl during the first SNOWISO fieldwork on Greenland. Here she works with wind measurement, where meteorological measurements are made to quantify fluxes in the lower atmospheric boundary layer.
Photo:
SNOWISO

Sonja Wahl is the first PhD student hired in the ERC funded SNOWISO project at the University of Bergen (UiB). The project is led by Hans Christian Steen-Larsen, and the aim is to enhance our ability to interpret ice core climate records, building bridges between the analysis of isotopes in ice cores and climate modeling (see fact box).

The first fieldwork in the SNOWISO project took place on Greenland, from May to August, with Wahl leading the SNOWISO-team, in Steen-Larsen’s absence.

“I was in the field for six weeks. It was my first fieldwork, so I didn’t quite know what to expect. But it ended up being a rewarding and very positive experience”, says Wahl.

PhD student in the field

The SNOWISO project, in short, deals with snow-atmosphere exchange of water isotopes.

Her main tasks on Greenland were setting up and adjusting the instruments, being a "problem solver", and leading the team in taking more than 8000 snow samples, which are currently being analyzed.

Now she is back at the Geophysical Institute at the University of Bergen and the Bjerknes Centre for Climate Research.

"Although the days in the field can be a bit repetative, the days in-between fieldworks involves many diverse challenges. My main tasks now are analyzing the data from Greenland and preparing for the next fieldwork", she says.

SNOWISO has a strong international collaboration with Germany, France, USA, and Denmark. A project that crosses boarders and institutes was appealing to Wahl, who has an international and broad background herself.

"I like being a part of a team. It's motivating to work with people from different backgrounds and research areas, towards a common goal", says Wahl.

Further, she believes interdisciplinary exchange of knowledge is very useful in research.

A PhD position in a project like SNOWISO involves a lot of hands-on research experience, development of research ideas, and opportunities to be responsible for your own research career.

Wahl's advise to students aiming for a PhD position is to have an interdisciplinary approach to the studies, and to find ways to build international experience.

Wahl's academic background is in the fields of geophysics, biochemistry and climatology. Previously she has studied at the University of Tübingen (Germany), University of Hohenheim (Germany) and University of Copenhagen (Denmark). She also had an internship within industrial chemistry at SKODA Auto AS (Czech Republic). Her current PhD work is within cryospheric processes.

"The days abroad has provided me with organizational skills that are useful when it comes to working with people from different cultural- and scientific backgrounds. I believe it has also made me more independent. In this project I benefit from having a diverse background, combining the meterological aspect, like turbulence, with the geochemical isotope-aspect", says Wahl.

Between analyzing data from Greenland, Wahl is currently preparing her next fieldwork, to Antarctica in December. This involves planning the set-up, testing and packing the equipment and getting familiar with the procedures. Once on the Antarctic ice sheet, being well prepared will come in handy. In the upcoming field season, Wahl will lead the installation and measurements on her own.

"Greenland was exciting, but Antarctica ... I never thought I would end up in Antarctica one day. Few people ever go there, so I think this will be really interesting, both when it comes to the scientific part and for me personally", she says, adding:

"The conditions will be more difficult than on Greenland. But on the other hand, this time I know more of what to expect. I felt quite nervous before my first fieldwork, but this time I'm really looking forward to going back into the field".

Isotopes are, simply put, atoms with a specific composition. The isotopic composition varies, for instance due to temperature, and in this way the isotopes contain an "image" of the climate at a given point in time.

The use of ice core records as climate archives thus mainly relies on the assumption that the state of the climate determines the isotopic composition of precipitation, which is "stored" in ice, and can later be analyzed in ice cores.

The ERC Starting Grant project SNOWISO (Signals from the Surface Snow: Post-Depositional Processes Controlling the Ice Core Isotopic Fingerprint) questions this view, with the hypothesis that the isotope record from an ice core is determined by a combination of the precipitation isotope signal and the atmospheric water vapor isotope signal above the snow surface.

Placed at the Geophysical Institute, Faculty of Mathematics and Natural Sciences, the project lasts from 2018-2022. 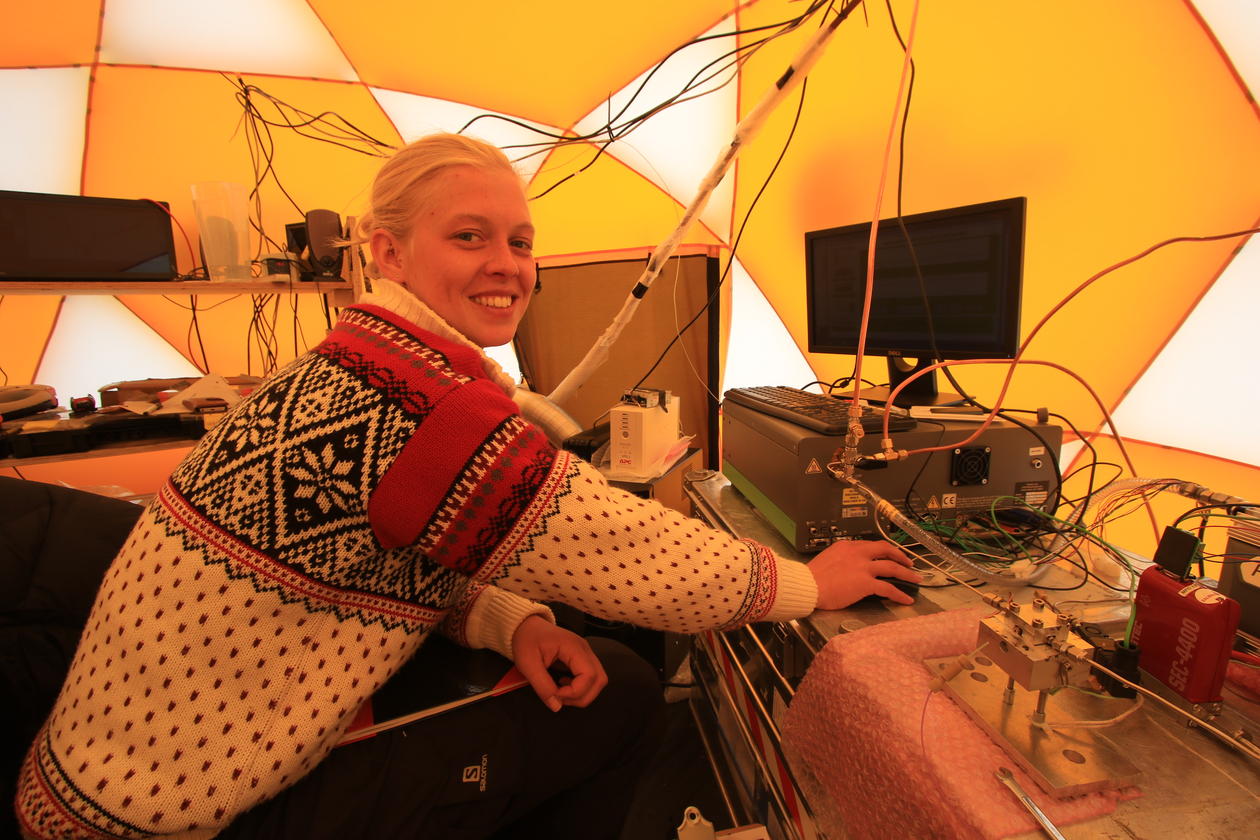 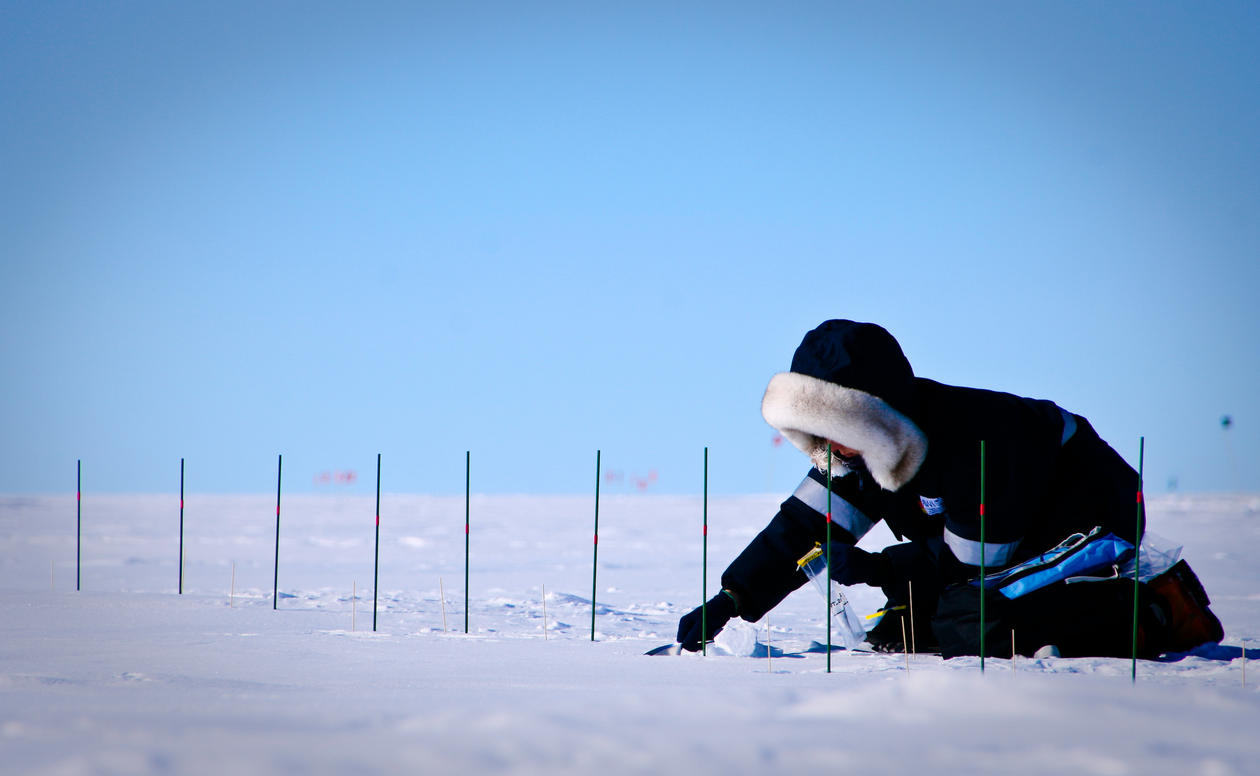 Snow is sampled from the top surface layer in order to link the isotopic signal in the snow with the water vapour measurements.
Photo:
SNOWISO 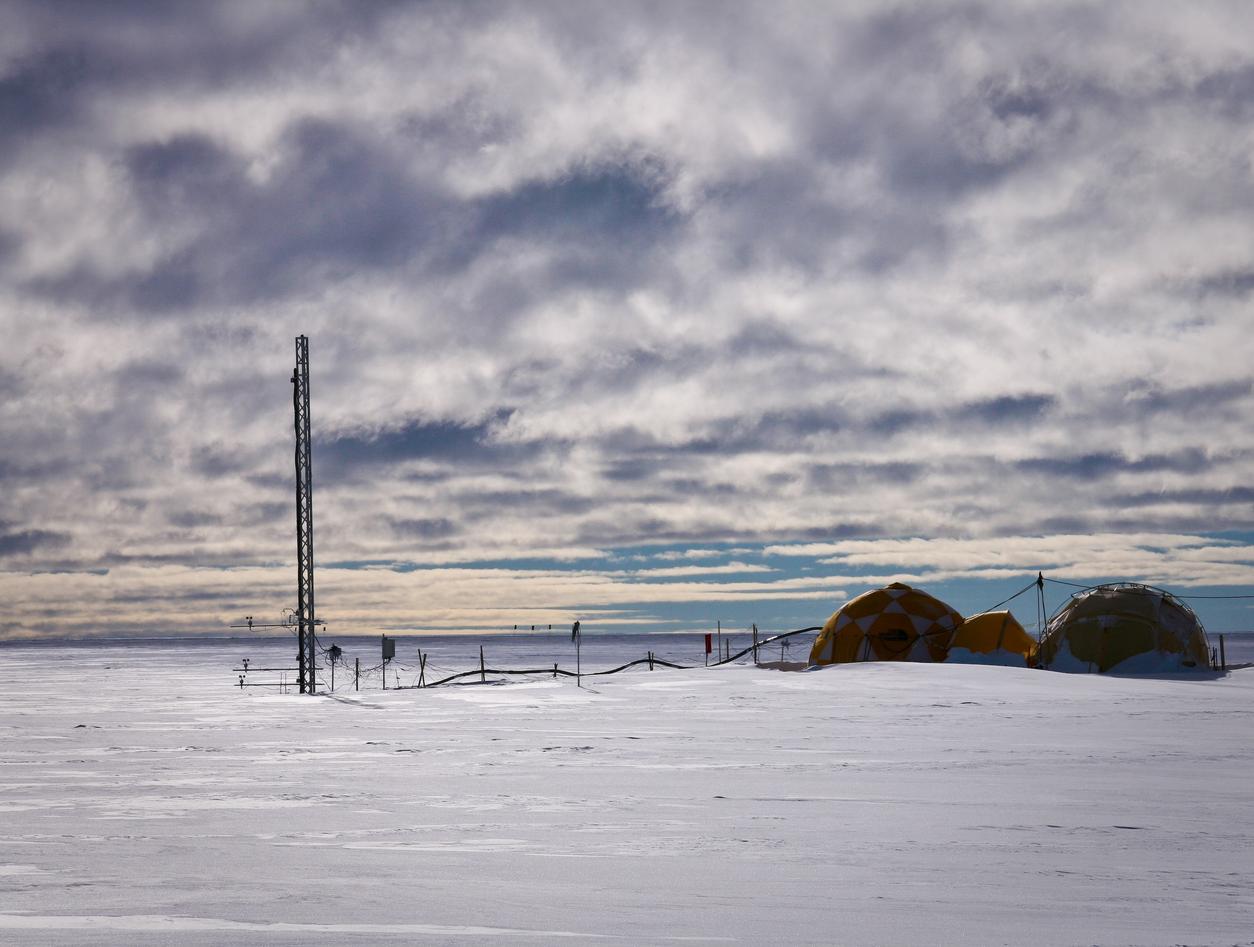 The vapour tent and the measurement tower at EastGRIP Camp
Photo:
SNOWISO 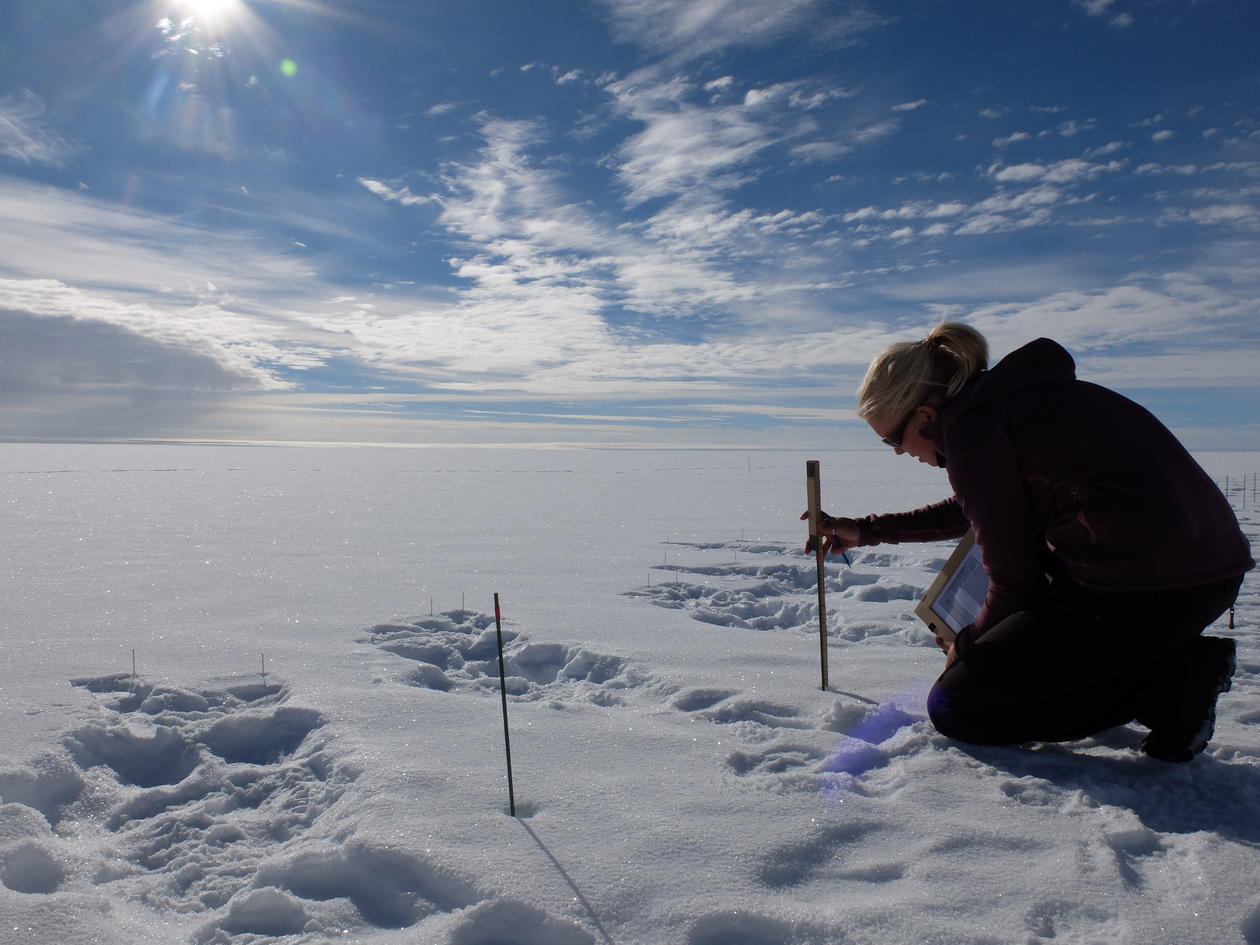 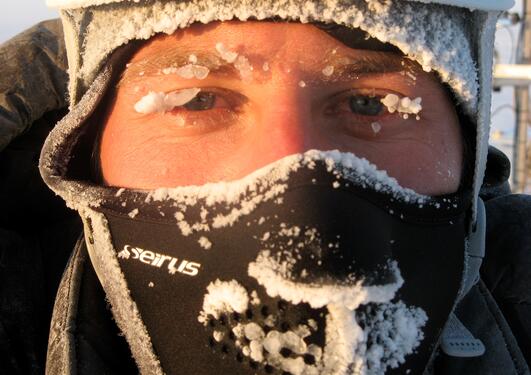 Climate researcher Hans Christian Steen-Larsen has for many years explored some of the most extreme environments on Earth, in his search to improve our climate models. If he succeeds with his new ERC-project, it will have great impact on todays climate research.