On climate change and child health

How does climate change impact on child health? That is the subject of a research collaboration between Stellenbosch University and the University of Bergen.

During the Norwegian delegation headed by Minister for Research and Higher Education, Ms Iselin Nybø, the research project Climate Change, child health and care responses in South Africa was presented by Professor Scott Drimie from Stellenbosch University and Associate Professor Marguerite Daniel from the University of Bergen (UiB). The presentation was at the School of Public Health at University of Western Cape (UWC) on Thursday 1 November.

The challenges with intervention

The researchers recognised a number of ongoing problems related to attempts to improve child health.

“We realised that with child health interventions often being externally funded and designed, local expertise – especially that of parents – is not always acknowledged,” said Daniel, “and they are often not sustainable. When the funds finish, the intervention stops.”

In particular, the Intergovernmental Panel on Climate Change (IPCC) has expressed concern over the invisibility of children in climate adaptation approaches.

“In our two research sites we found that temperature rise caused by climate change exacerbates incidences of diarrhoea when temperatures rise whereas low temperatures bring increased incidence of pneumonia and asthma,” said Daniel.

Add to this that extreme events (e.g. droughts, flooding) bring with them food insecurity.

The children caught in climate change

Moving on from this point, the network looks at how climate change directly impacts on child health and hypothesise that childcare mediates the impact of climate on child health.

“Childcare as practised in families is holistic – as they do not separate nutrition, hygiene and psychosocial care – as we tend to do in interventions. A childcare lens helps to avoid fragmentation,” the researchers said.

Based on successful examples of community and family child health intervention measures, the project has used a positive deviant approach to identify families who are providing exemplary care to mediate the impact of climate on their children’s health and to spread these behaviours and practices to others in the community. 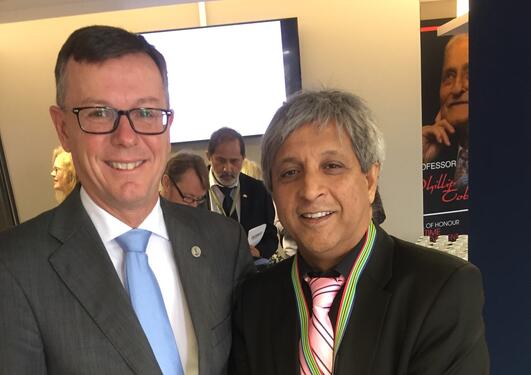 South African university leader Adam Habib believes that research and innovation must be linked to equality if the goal of a sustainable world is to be reached. In February 2019 he is the opening keynote at Norway's National SDG Conference Bergen.