Skip to main content
Kerim Hestnes Nisancioglu on a field work in Greenland, as part of the ERC Synergy Grant project ice2ice.

A jigsaw puzzle of climate change in the Arctic

What will be the consequences of ice on Greenland and in the Arctic melting at an alarming pace? This was one of the questions Professor Kerim Hestnes Nisancioglu and colleagues wanted to find answers to in the largest ever ERC project in the Nordic countries; the Synergy Grant Ice2Ice project.

The main objective of the project, which lasted from 2014 through 2019, was to understand the effect of melting Arctic sea ice on Arctic climate and the Greenland ice sheet. The researchers also wanted to compare the current climate changes in the Arctic with abrupt changes that occurred naturally during the last Ice Age, as well as investigate the global and local consequences of the melting ice on temperature, ocean circulation and sea level.

“Ice2Ice demonstrated for the first time that there is a clear connection between changes in the Arctic and the rapid melting of ice in Greenland," says Kerim Hestnes Nisancioglu, a researcher at Department of Earth Science, University of Bergen and the Bjerknes Centre for Climate Research.

The "Arctic Sea Ice and Greenland Ice Sheet Sensitivity" project (Ice2Ice) was an interdisciplinary research project and a collaboration between the climate scientists at the Department of Earth Science and the Bjerknes Centre at the University of Bergen, the Danish Meteorological Institute, the Niels Bohr Institute at the University of Copenhagen and NORCE Climate in Bergen.

Dynamics of the sea: Kerim Hestnes Nisancioglu, UiB and the Bjerknes Centre

This cooperation has entailed a high degree of exchange of personnel between institutions and cities.

Between 2014 and 2019, the team published around 90 articles in scientific journals

“Receiving a Synergy Grant was a fantastic opportunity to attack some of the biggest issues within the climate field. We succeeded with much of what we wanted to achieve – and have laid a good foundation for further research,” says Nisancioglu.

He describes Ice2Ice as a “jigsaw puzzle”, where different groups have worked to find answers to their own problems, but that these are closely related and cannot be solved without the other pieces.

Ice2ice was like a "jigsaw puzzle", and solving the different pieces created a synergy in the project.

Thus, in the project, Nisancioglu has worked closely with research fellows and researchers in three other groups led by Eystein Jansen from the University of Bergen/the Bjerknes Centre, Bo Møllesøe Vinther from the Niels Bohr Insititute/University of Copenhagen and Jens Hesselbjerg Christensen at the Danish Meteorological Institute, in addition to a close partnership and collaboration with Trond Dokken at NORCE Climate in Bergen.

Today, an estimated 9,000 tonnes of ice melts every second from the Greenland ice sheet. In an imaginary scenario where all the ice in Greenland melted, this would, according to Nisancioglu, have resulted in the global sea level rising by 7 metres. During a period prior to the start of the project, in 2012 to be more precise, Greenland was characterised by a period of drastic changes.

Video: An introduction to ice2ice

“The surface of the ice melted rapidly all the way up to the highest point of more than 2,000 metres above sea level, something we have not previously observed. Using this as our starting point, we wanted to take a look at the link between the glaciers in Greenland and the sea ice in the Arctic, compare the current situation with the mechanisms that created abrupt temperature changes in the past – and investigate what consequences this can have in a local and global perspective", he says.

"In the past, the extremely abrupt and large-scale changes in sea ice in the Arctic and climate in Greenland were natural occurrences. The project members have found that the rapid changes we are now seeing in the Arctic and on Greenland are approaching the same scale as during the previous ice age, but this time the changes are man-made," he says.

The project succeeded in securing good climate archives from both the ice on Greenland and the bottom of the Arctic Ocean.

As an ERC project, Ice2Ice was a so-called “high risk, high gain” project. This means that our research can potentially provide important insights, but that it is by no means certain that we will be able to achieve what we have set as our objective.

“We would use new methods for drilling thousands of metres of ice cores in a very inaccessible area in the far east of Greenland. In addition, we would obtain good climate data from the bottom of the Arctic Ocean. Finally, we developed new and advanced models that can show climate change in the past, present and future. The structure of the models can be compared to modern weather forecasts, but over much longer time intervals.

The project succeeded in securing good climate archives from both the ice on Greenland and the bottom of the Arctic Ocean. The new climate models also constitute an important innovation for climate research.

“There are still many gaps we need to fill in order to get the best possible results from the models, but we do know what data we need to have, and from where, to further strengthen the models. This is a very good starting point for further research on the topic,” he says.

Among other things, the Nisancioglu research group accounted for 10 publications in scientific journals in 2020 – the year after the project was formally completed. Several research fellows and postdoctoral researchers are still working on issues that were emphasised as part of Ice2Ice.

At the tipping point

“What has the project taught us, which society must take seriously?”

“The most important thing is that it is urgent that we reduce our climate footprint. We are at a historic tipping point where we are approaching a point where the situation in the Arctic and in Greenland in particular, cannot be reversed. Perhaps parts of the Arctic, the coast of Siberia and Svalbard have already passed this point, as very rapid changes are already taking place in these areas. It is important that people understand that anthropogenic climate change is real," he says.

Nevertheless, the climate scientist believes it is important not to paint a doomsday picture of the situation.

“The worst thing possible is if people become apathetic and are afraid of development. Instead, we must embrace this knowledge and use it as an inspiration for making changes. One thing is that as a society, we must commit to international climate agreements such as the Paris Agreement, but these debates can be difficult for many to relate to. Thus, it is important to look at the specific things we can do to reduce our own emissions,” he says.

The climate scientist has himself upgraded his house in Bergen, so that it does not use more energy than it produces itself. Read more about this in the newspaper BT [Bergens Tidende], (in Norwegian).

Kerim Hestnes Nisancioglu's top 5 measures to reduce our own emissions:

Nisancioglu's part of the project has been dealing with dynamics in the ocean, but he is keen to highlight the good interaction between the entire Ice2Ice team, both in Denmark and in Norway.

The ice2ice team consisted of more than 40 researchers and PhD candidates.

“Working towards common goals over a long period of time with so many young and talented researchers was very inspiring. The many social gatherings were also important for facilitating a stimulating scientific environment, across the institutions of Norway and Denmark,” he says.

After 20 years as a climate scientist, Nisancioglu has seen the field attract more and more societal attention. In recent years, in particular, he has seen major changes among younger people, not only in terms of knowledge but also in commitment to climate issues. Through Ice2Ice, the team worked actively with disseminating the popular scientific results of the project.

“Among other things, we gave talks and science presentations to 400-500 pupils as part of the ice2ice project. It is obvious that young people today are very interested in – and informed about – such topics as climate change and sea levels. This curiosity among the young is very inspiring for those of us with longer experience, providing us with additional motivation to solve even more pieces of this comprehensive puzzle,” he declares. 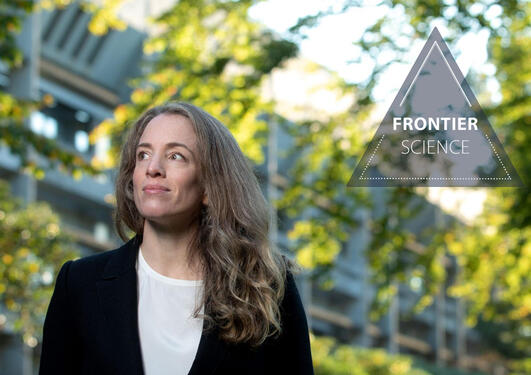 As grantee number 10,000 to receive funding from the European Research Council (ERC), Inga Berre will use applied mathematics in order to understand what happens underground when heat is extracted from the Earth's interior.