STONE OF RUST: This rock (on the left) from the seafloor is built of small stalks created by iron-eating bacteria. The stalks are covered in rust that precipitates on the outside stems. Such iron deposits can become several meters high. On the right: Black iron sulphide on the bottom, water, salts, and a dash of vitamins to get the iron-eating bacteria to grow and produce rust.
Photo:
Eivind Senneset

“I was studying to become a geologist. But one day I discovered bacteria in a rock, and I grew curious: What on earth is this,” asks Professor Ingunn Thorseth from UiB’s Centre for Geobiology.

As the word implies, geobiology is a combination of the rather diverse disciplines of geology and biology. But over the last few years, it has increasingly emerged that the two actually have a lot in common.

UiB has been at the forefront in recognising the work in this cross-disciplinary research field, and the Centre for Geobiology got its status as a National Centre of Excellence (SFF) in 2007.

“In the beginning it was kind of lonely to be involved in this. But after a while I realised there were many researchers doing this type of work: people sitting in their little offices around the world, with images of strange rocks in their desk drawers,” she says with a smile.

Life in the dark

These days you will find a geobiology research group at many universities.

It may very well be that the hot vents found in the Northern Atlantic are similar to the conditions that existed when life came about on earth. The areas around the vents are teeming with life. Microorganisms transform gases and minerals that are present in the hot water that emanates from the earth’s interior.

Maybe there is a large, unknown biosphere hidden beneath the seafloor. If so it probably plays an important role for environmental conditions on earth. But in what way?

Thorseth heads a research team called Water-Rock-Microbe Interactions and the Deep Biosphere. She and her team examine traces that microorganisms leave behind in rock: so-called biosignatures. There are many different ways to recognise traces of life in the rocks, all the way from the very shape of the rock to specific chemical traces.

Yet many questions remain. At what time did this possible life exist? What kind of life are we talking about? Did life only survive thanks to the energy from the earth’s interior, or was life also reliant on energy from the surface, where the sun shines?

“On the seafloor there are microorganisms that oxidise iron and use it as food. We know this type of organism from freshwater. Often you can see something resembling rust where groundwater emanates from the surface. On the seafloor close to the hydrothermal vents, we also found large areas of iron deposits,” she says.

Thorseth displays a porous rock, created by layer upon layer of rust. The rust is the visible trace of the iron-eating bacteria. One type of such bacteria creates a stalk of minerals to anchor itself to the ground.

The stalk remains long after the bacteria itself is gone, and constitutes an easily recognisable biosignature signalling which organisms once created this carpet of rust.

“We are now trying to establish whether all rocks composed of such stalks were created by bacteria, or if they also occur in other ways. We investigate how they change their appearance as the rock gets older, she explains.

The visible traces of these iron-eating marine bacteria are similar to the ones found in freshwater. But when comparing the DNA of bacteria in freshwater with the ocean bacteria, these are very different.

This points towards great diversity in iron-eating bacteria, and that the ability to use iron as an energy source may have developed separately in different places and different times in earth’s history.

“We have to assume that there are many similar organisms, which we can’t find at present because we don’t know what DNA to look for,” Thorseth suggests.

From the seafloor to the lab

When the researchers at the Centre for Geobiology go on expeditions, they inevitably look for new hydrothermal vent fields. Here they sample and analyse the vent water flowing from the seafloor as well as the surrounding bottom seawater. They measure gases, minerals, and trace elements in the outflowing water. They collect microorganisms and samples of rocks and sediments from the seafloor. These are then brought home to the lab and subjected to research.

The thinking is that the hydrothermal fields represent the oldest form of life on earth and may let us in on the secrets of how life occurred.

“But was life back then what we think of as life now? That is a completely different question,” says Ingunn Thorseth.

In the summer of 2013, researchers from UiB's Centre for Geobiology discovered several new hydrothermal vents in the oceans between the archipelago of Svalbard and the island of Jan Mayen. 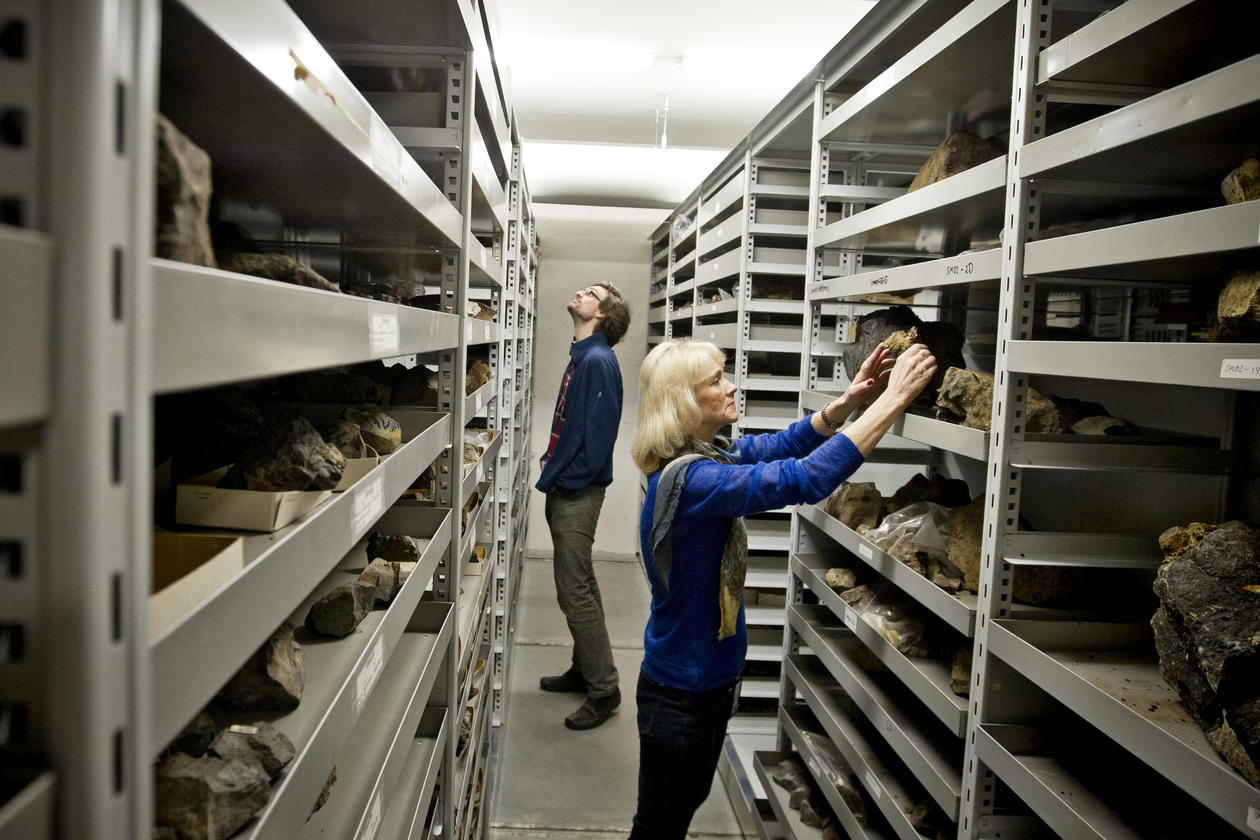 IN THE ARCHIVE: Professor Ingunn Thorseth gets help from researcher Håkon Dahle (at the back) in cataloguing the collected rock samples.
Photo:
Eivind Senneset