COASTING IT: Nils Kolle takes in the view at Landrovågen on Sotra, an island 20 minutes drive west of Bergen. In this area people were reliant on the fisheries, a few farm animals, and a patch of land. People rowed by boat to Bergen city centre several times a week to sell fresh fish.
Photo:
Eivind Senneset

“As Norway has a long coastline, Norwegians have always been a people of the coast,” says Nils Kolle, associate professor of history at UiB’s Department of Archaeology, History, Cultural Studies, and Religion. Kolle grew up on a small farm in a fjord village south of Bergen, and his research as a historian has focused on the life and traditions of people on Norway’s west coast.

“It is on the shore and along the fjords that we find most of Norway’s topsoil, and then of course there are the resources of the sea. Inland Norway was more unilaterally dependent on agriculture and forestry, whereas coastal enterprise was based on a number of industries. If you were a fisherman with a plot of land and some livestock, you had more than one leg to stand on if crops failed one year.”

Kolle is currently busy as the editor of a five-volume work on Norway’s fishery and coastal history, with a focus on what he calls the Norwegian fish farmers, i.e. people who combined fishing with small-scale farming.

“Whereas the tenant farmers of Ireland were exploited by the landowners and stood no chance of saving money, the fish farmers of western Norway kept a profit for themselves, and some even accumulated wealth. Thus the motivation to take advantage of the resources of the sea were greater in Western Norway than in Ireland. Also people on Norway’s coast mostly lived in peace, sheltered from acts of war or large population movements, which were common in Europe at the time.”

According to Kolle, Norway was populated about 9,500 years ago and the first humans followed the seals northwards along the coast. Throughout Norway’s history fish have been the prime marine resource and traditionally been the basis for life on the coast.

This did, however, change drastically 40 years ago with the discovery of oil in the North Sea. The oil rush has created a different type of work and has impacted all levels of Norwegian society.

“You see this most clearly on the west coast. All the way through the eighteenth and nineteenth centuries right up until World War 2, fishing and farming were the main sources of income for most people. Today work in the fisheries has been replaced by work in the oil industry. But you could say that the resources are still harvested from the ocean.”

In the eighteenth and nineteenth centuries, life on the islands outside Bergen was much like life elsewhere on Norway’s rugged coastline. The men primarily went fishing, whilst the women stayed at home with children and performed the day-to-day running of the farm.

“They grew potatoes with a couple of cows and some sheep grazing in the pasture. The landscape of the island was bare with few trees, so they got most of their fuel from peat bogs. Timber for boats and housing was purchased from inland villages,” says Kolle.

The difference between people from the coast just outside Bergen and the rest of Western Norway was the proximity to a major city. In the late Middle Ages, Bergen was Scandinavia’s biggest city and up until around 1830 it was Norway’s biggest city.

“There was a huge demand for food and the people living within rowing distance to Bergen had a great advantage in selling their fish to city dwellers. Prices were negotiable and the fishermen were paid in cash,” he explains. “So they were early adopters of a monetary economy.”

The historian believes this enhanced the coast people’s position as independent participants in the emerging market economy.

The fish trade was also the reason the Hanseatic League was established in Bergen in the fourteenth century, turning the city into an international trade centre. But the fish that the market town of Bergen was founded on were caught further north, in the Lofoten Islands.

Northerners dried fish (mainly cod), sailed south and sold it to their regular merchants. According to Kolle, there was a major difference between northern and western fishermen.

“Northerners never got paid in cash, but traded fish for grain, salt, fishing tools, and other useful goods. The northerner was forever indebted to his Bergen merchant and this debt was passed down from father to son.”

Whereas the northerners had to undertake a long and arduous journey just to sell their fish, the coastal people outside Bergen didn’t have to travel far to take advantage of the spoils of nature. The fish resources and the fish marketplace were both within a day’s travel for them.

Even though the local fishermen in principle were free to trade with whomever they pleased, most retained permanent trade relations.

“They were independent and not poor, but considered awkward by the city population and known locally by the term ‘stril’,” the historian says.

There are however many depictions of the ‘stril’ in both fiction and non-fiction literature.

“The ‘stril’ was known for his old-fashioned dress sense and was pretty stubborn. The coastal people were not easily swayed by new trends and fashion, but were firmly rooted in local traditions and culture. Their peasant clothing and dialect made them the laughing stock for the ‘fine’ people of the city. But they developed and cultivated some sort of resistance to urban culture well into the twentieth century,” Kolle explains.

This type of cultural gap between city dwellers and rural culture is found all over the world, so the relationship between the ‘stril’ and the citizens of Bergen is hardly unique.

“The word ‘stril’ still lingers in everyday speech but is today used more humourously,” he says, even though up until a generation ago people from outside town could still be called names when they visited Bergen. “Which is a bit ironic considering that most people who live in Bergen have roots in the surrounding areas that often only stretch back a generation or two.”

A version of this article is published in UiB’s research and education magazine — Hubro international edition 2013/2014. If you want a free copy, please send us an email. 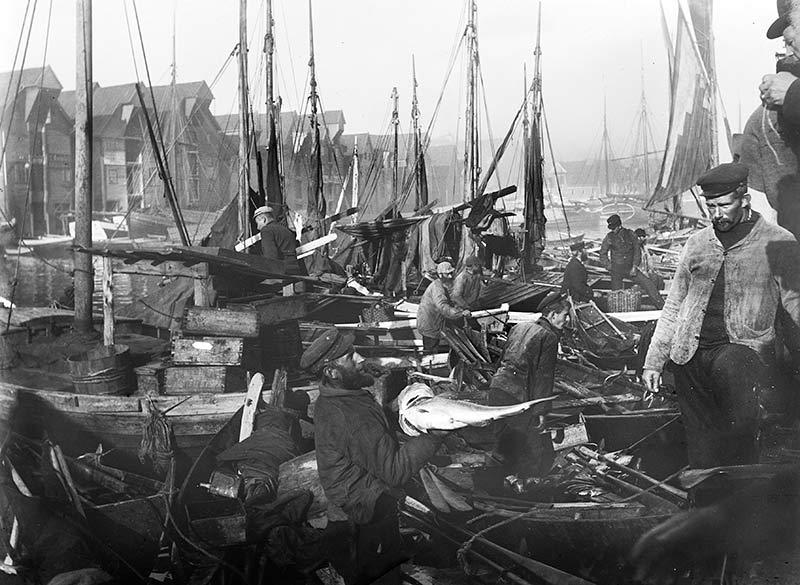