Filling in for John Birks

It was necessary for John Arvid Grytnes and Ernst Nordtveit to step in and hold the opening lecture at the biodiversity conference in Kathmandu in Nepal, at very short notice.

- Do I need a tie? asked associate professor of biology John Arvid Grytnes of the University of Bergen.

-Yes, answered professor of law, Ernst Nordtveit also of the University of Bergen.

Nordtveit and Grytnes are in downtown Kathmandu, shopping for new suits.  The conference on biodiversity, livelihood and climate change will start tomorrow.

An hour earlier, at the Summit Hotel, professor of biology and conference coordinator, Ram P. Chaudhary informed everyone of the programme for the following day.  John Birks, professor of biology at the University of Bergen will hold the opening lecture and welcome speech.  There are a number of prominent guests. The President of Nepal will also be present.

But John Birks is ill and is at home in Bergen after en encounter with a South African tick.  Nordtveit will have to speak in Birks absence.  The professor reacts immediately.

- I will need a new suit if I’m going to meet the president, he says determinedly.

- Do I also need a suit?, asks Grytnes, who has been more or less prepared to hold Birk’s readymade lecture, in his absence, for several days.  But nobody had considered the dress code.

Securing biodiversity for the future

It’s soon the end of the UN biodiversity year 2010.  The University of Bergen is joint organiser of the Conference on Biodiversity, Livelihood and Climate Change in the Himalayan Region, together with Tribhuvan University in Kathmandu.

The University of Bergen has collaborated with Tribhuvan University since the early 1990’s, especially within the field of biology, but also within the fields of geography and social anthropology and it is now likely that the Faculty of Law will also begin collaborating with Tribhuvan University.  Ernst Nordtveit has been leader of the HimaLines project since 2009.  The project examines the botanical and legal aspects of forest preservation in Nepal.

- Nepal and the Himalayan region are rich in biodiversity.  One of the reasons for this is differences in altitude and big variations in rainfall.  Nepal, at the front of the Himalayas, gets a lot of rainfall from clouds that drift in from the Indian subcontinent, and Tibet, which is behind the Himalayas, is in the rain shadow.  Another reason for this, is that Nepal borders many regions that have different flora, says Postdoc Elisabeth Måren at Uni Bjerknes.

Måren and biologist Vigdis Vanvik are in charge of the projects biological research.

Nepal, like Norway, has a long tradition regarding forest preservation, and various methods of preserving the forest.  But Nepal also has a growing population which makes use of the forested areas.  The population fetches firewood, animal fodder and plants for medicinal purposes, from the forest. They have always done this, but as the population grows, it gets to a point where the exploitation is no longer sustainable.

The HimaLines project is multidisciplinary.  This makes it possible to analyse how different judicial systems and legal regulation influence the development of biodiversity, and forest preservation in particular.  The project looks at the effects of regulation. There are lawyers, biologists and geographers among the project participants.

Professor Ernst Nordtveit and PhD student Liv Shelby are involved with the judicial part of the project and are looking at how conditions vary between forest that is managed by the inhabitants, forest owned by the state, and privately owned forest.

Next year is the UN Year of the Forest

Ernst Nordtveit is the first of the foreign dignitaries to mount the stage at the Nepal Academy in Kathmandu, Sunday 12th December.

Kalemani Jo Mulongoy, from the secretariat for the UN convention for the preservation of biodiversity in Canada, mentions 2010 as a year of extreme heat, floods and earthquakes.

- It is important to keep biodiversity, and it is the inhabitants of the poorer countries that first notice the consequences of climate change and falls in biodiversity, says Mulongoy referring to his African ancestors.

Nepal is one of the poorest countries in the world and it is thought that many of its inhabitants are undernourished.  Many are dependent on the forest, and deforestation has become a problem.

- Twenty two countries are represented at this conference, which includes the UN and EU.  I am delighted that they have all come to my country, said Nepalese President Ram Baran Yadav.

Five scientists from the UiB will present their contributions, over the next few days.  The conference is sponsored by the UiB and The Research Council of Norway through the HimaLines project. 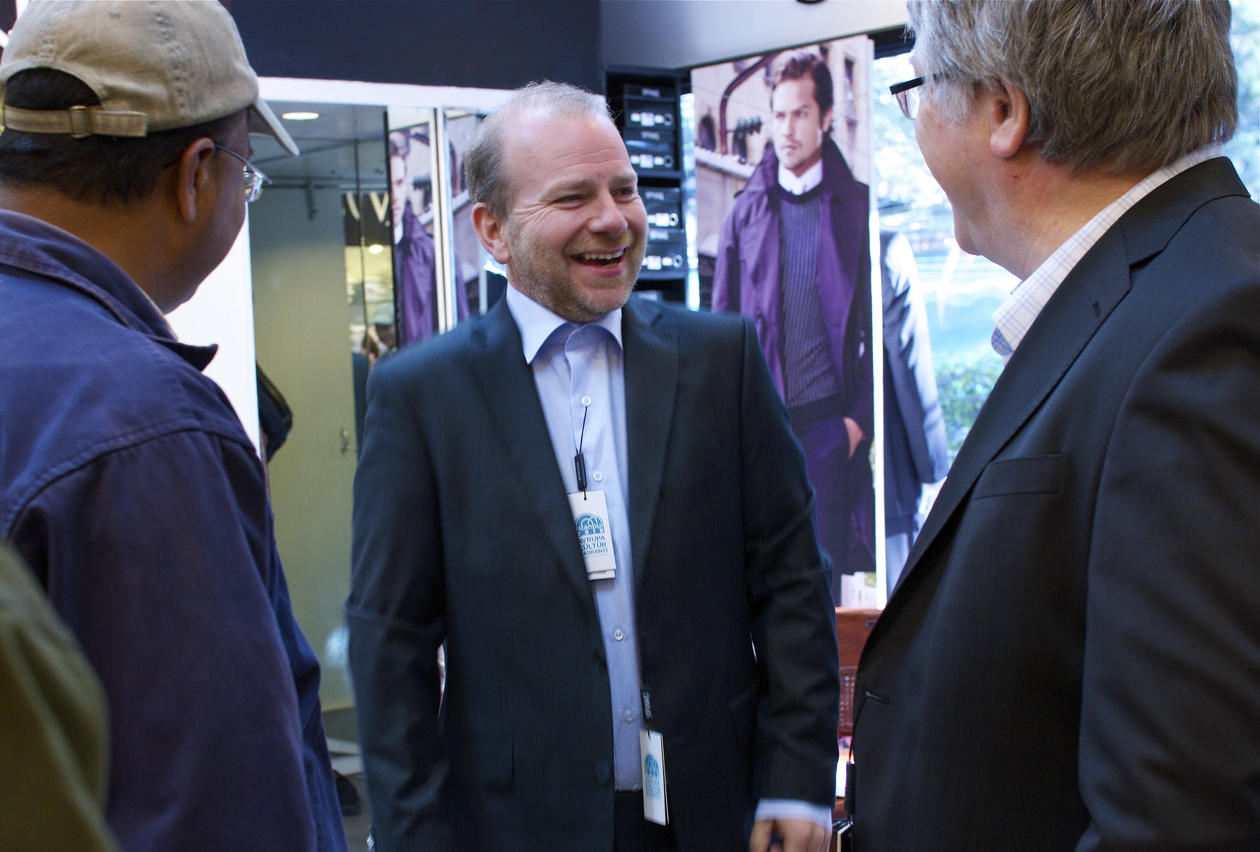 CORRECT ATTIRE: I’m not a suit person, laughs associate professor John Arvid Grytnes of the UiB, in the middle of the picture. Grytnes and Ernst Nordtveit (right) are shopping for suits for the opening ceremony of the Nepalese conference. Dr. Khem R, Bhattarai (left) is a Nepalese research representative and guide.
Photo:
Gudrun Sylte 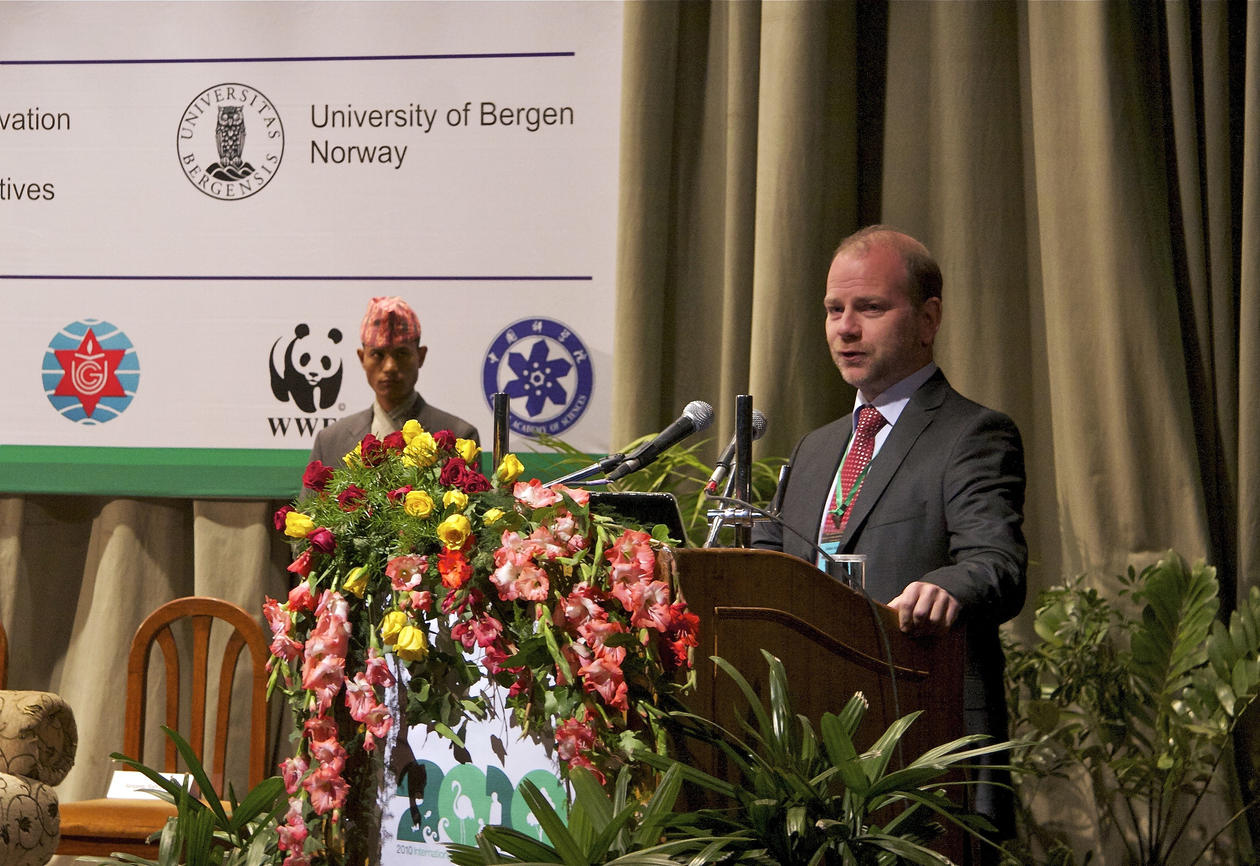 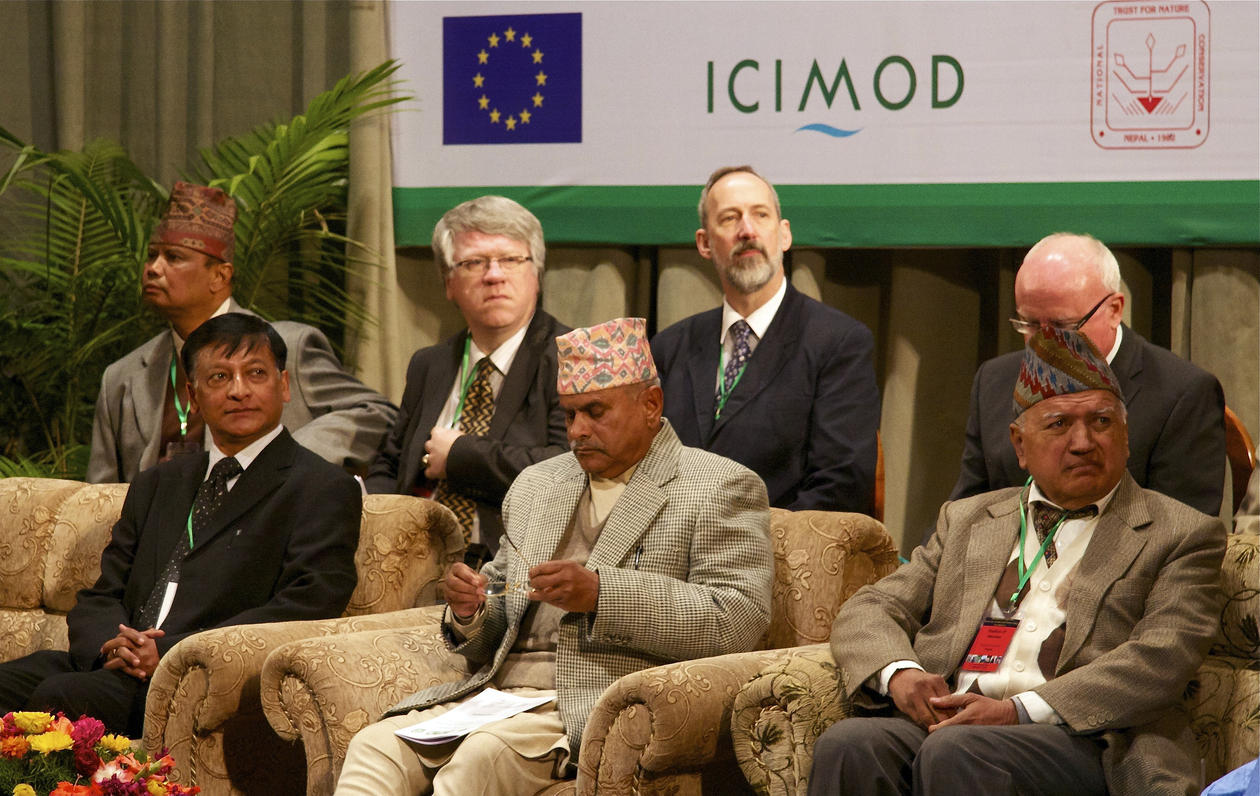