From 2005 to 2011 the University of Bergen has climbed 199 positions in the QS rankings of the world’s elite universities.

In the last year alone the University of Bergen (UiB) has moved from number 133 to number 121 in the QS World University Rankings. The QS has its own rating system for the world’s top 500 universities.

As late as 2005 UiB was number 320 in the QS rankings. The university has made a remarkable leap of 199 positions since then to be ranked number 121 of the world’s elite universities.

Rector Sigmund Grønmo is obviously pleased with the new position and the progress from last year.

– This ranking puts particular emphasis on international reputation and academic quality. This is of considerable concern to us, as one of the UiB’s stated goals is to be an internationally acclaimed university. Staff and students at UiB deserve praise for this leap in the rankings, Grønmo says.

One of the main priorities of the UiB is to be recognised as an international destination for research and development.

– This ranking is yet another indication that we are reaching the prime targets we have been setting. The same applies for our emphasis on quality, Grønmo says.

He believes the high ranking will mean a lot for both the university and the region.

– As the university achieves more acclaim on the international level more highly qualified professionals are attracted to work here. In this way we are developing an international environment, which is also beneficial for our society, for Bergen and for the west of Norway.

Grønmo believes the high rating can be used to promote UiB, yet stressing that there is no overall strategy to simply achieve a higher rank.

– The good ratings are merely an indication that we are making the right decisions, he believes.

Later this autumn Times Higher Education also presents its ranking of the world’s elite universities. In 2010 UiB were ranked 135th, which is on par with last year’s QS ranking at 133.

The QS ranking of the world’s elite universities is based on a complex methodology, largely based on six indicators: 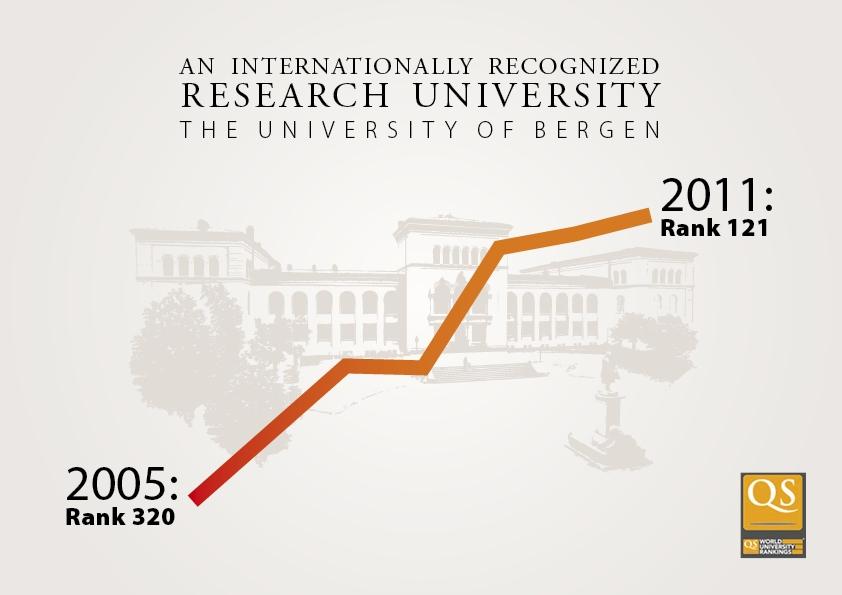 UiB rising to number 121 in the QS World University Rankings 2011.