John Pilger has been a pain in the arse of Australian, American and European authorities for decades. He speaks at a public lecture in Bergen on Thursday October 13.

– John Pilger is an intellectual journalist who shows how the power hides from public scrutiny. He has created great work over a long period, and has written about everything from war to pharmaceuticals. But his main focus is on types of oppression that compromise human dignity, Bruce Kapferer says.

Kapferer is a professor at the Department of Social Anthropology at the University of Bergen (UiB). He invited Pilger to Bergen as part of the new and prestigious lecture series Bergen Lectures in Critical Social and Political Inquiry, which debuted last month with a thought-provoking lecture by Harvard professor Elaine Scarry.

– It’s not easy to attract intellectual greats to these events, but I told Pilger that the Bergen Lectures are public lectures with serious, intellectual figures, Kapferer says.

Kapferer stresses that the lectures are not exclusively aimed at academics, but are meant for a wider audience.

Pilger and Kapferer grew up in the same area of Sydney and they both left the country in the Sixties. Since then Pilger has worked as an investigative reporter, war correspondent, writer and documentary filmmaker. His work has led to major revelations and Pilger has received numerous awards for his work.

A lack of critical voices

According to Kapferer, Pilger represents something which is sorely lacking in public discourse: reporters who are also critics.

– Critical voices are muted both in the media and academia, Kapferer suggests. – A good example is what is going on in Libya now. Even on the BBC you hardly find any critical information.

There was also a screening of Pilger’s documentary “The War You Don’t See” before the lecture in Bergen, but according to Kapferer there is no direct link between the film and Pilger’s lecture.

– Pilger doesn’t want to be too specific about the subjects he will be discussing. The idea is that he will talk for half an hour about his work followed by questions from the audience. But the main subject will be the increasing authoritarianism in Western Europe and the US, Kapferer says.

As for future Bergen Lectures, Kapferer hopes to attract well-known public intellectuals such as writer and activist Arundhati Roy, historian and campaigner Tariq Ali and the linguist and philosopher Noam Chomsky.

John Pilger will be at Studentsenteret in Bergen Thursday 13 October, starting at 14:00. 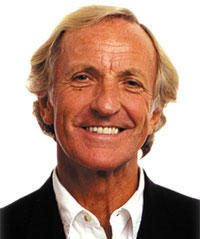