More than 500 international students arrived in Bergen last week to start or continue their studies at the University of Bergen.

The students from all corners of the world gathered at the Student Centre (Studentsenteret) to register for their studies. Most of them had arrived a few days before registering and were already getting to know Bergen.

– It’s a very beautiful city, Asrat Gella (30) from Ethiopia said after getting help with registering for his travel card with Skyss for local transport.

Like most of the international students arriving in Bergen, Gella has been accommodated at Fantoft studentby, and is already familiar with Bybanen taking him into the city centre.

There are stalls for virtually all the basic knowledge that the new international arrivals need to know: various student services, information about student democracy, TB testing, public transport information, housing solutions and the student gym – to mention a few of the stands set up to ease the foreign students’ path to living and studying at the University of Bergen (UiB).

Gella is in Bergen to do his master degree on gender and development, and mentioned a number of reasons that he chose the UiB.

– I found a flyer advertising UiB and what I read appealed to me. Also, the scholarship is a bit better here than many other places, he said before pointing out the close ties between Norway and Ethiopia as another reason.

This being early days, Gella has yet to decide for the exact subject for his master thesis, although he had some idea of what direction he would take his subject in.

– It will probably be something to do with gender and disability, because this is something that hasn’t been written much about in Ethiopia, he said.

28-year old Suzan Mbatudde from neighbouring Uganda is in Bergen to do a master in public administration.

– Bergen was my only choice and I’m already convinced that this is the right choice, she said enthusiastically. – I stay in one of the top flats at Fantoft and I love the view of the city!

– It was my lecturer in Uganda who told me about the UiB. She had been her herself in 1998 and had only good experiences from studying here, Mbatudde says.

Queuing for a buddy

Mbatudde is one of many students we find queuing at the stall of Buddy Bergen.

She is running the stand of this outreach initiative, which was kicked off in the spring of 2008 and has grown steadily every year since. Buddy Bergen now includes as many as 2,000 students – both international and their Norwegian buddy students – every year, and also use social media as part of the project.

Amanda Mancebo is in Norway for the first time. The 21-year old Spanish medicine student has already studied for three years in her home country at the University of Extremadura, a partner of the UiB.

– I like to get to know different people and new culture. And also to improve my English, she said before adding with a laugh. – And to enjoy myself.

So what did she know about Norway before arriving here?

– I heard that the weather was cold, she smiles.

She doesn’t rule out that she may want to work in Norway after finishing her studies.

– Norway has a good health system and I think it could be good to find a job here in the future, she suggests.

Will McBarnet from Hawaii decided to do his master at the UiB after falling in love with Norway whilst backpacking.

– I ended up in Finnmark and wanted to come back here. I’m into outdoor activities and there are many options for that in Norway, he says

The 26-year old is doing a master degree in aquaculture.

– It seems like there are many more options to do research on aquaculture here than many other places. The culture for this is not as developed in the US, he suggests and says that he was never in doubt about where to study after checking out the master program at UiB. 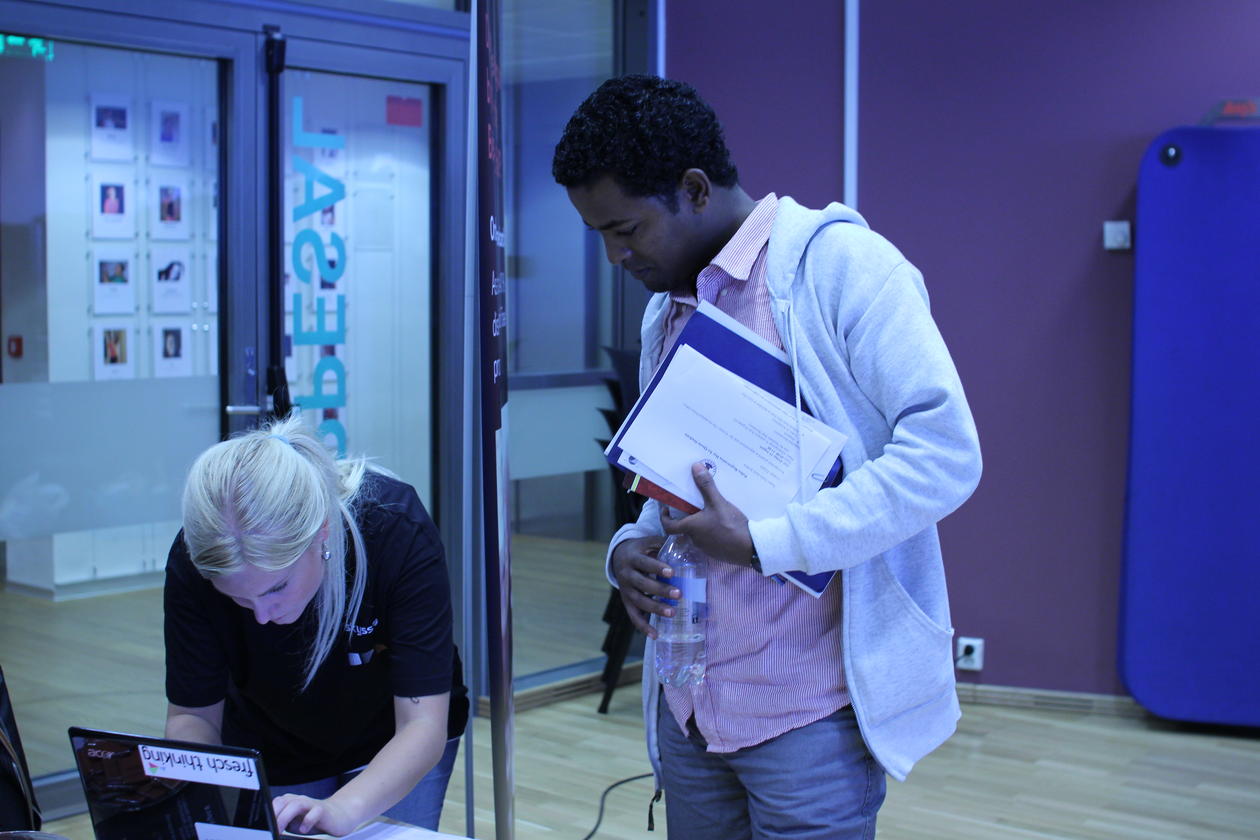 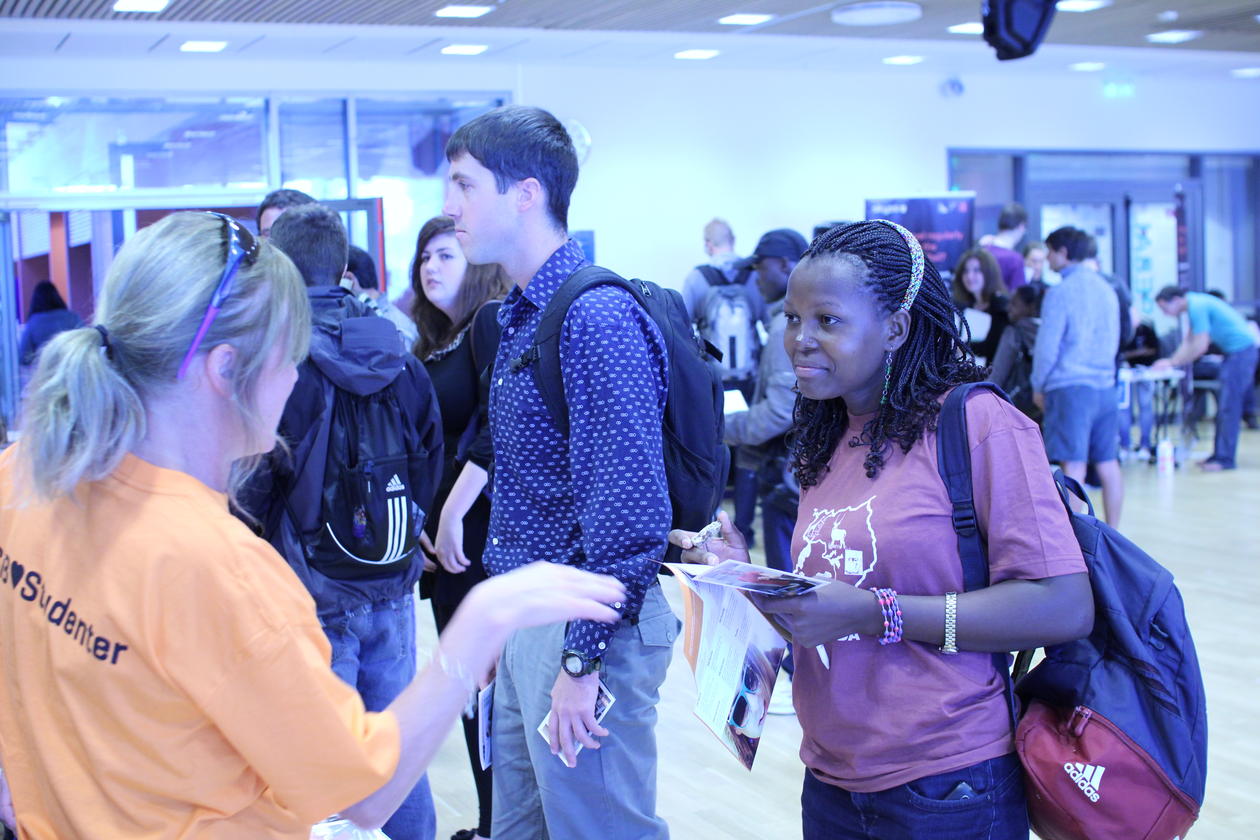 Will McBarnet from the US and Suzan Mbatudde from Uganda enquiring about sporting options at a SiB training stall during first day for new international students at UiB in August 2011.
Photo:
Sverre Ole Drønen 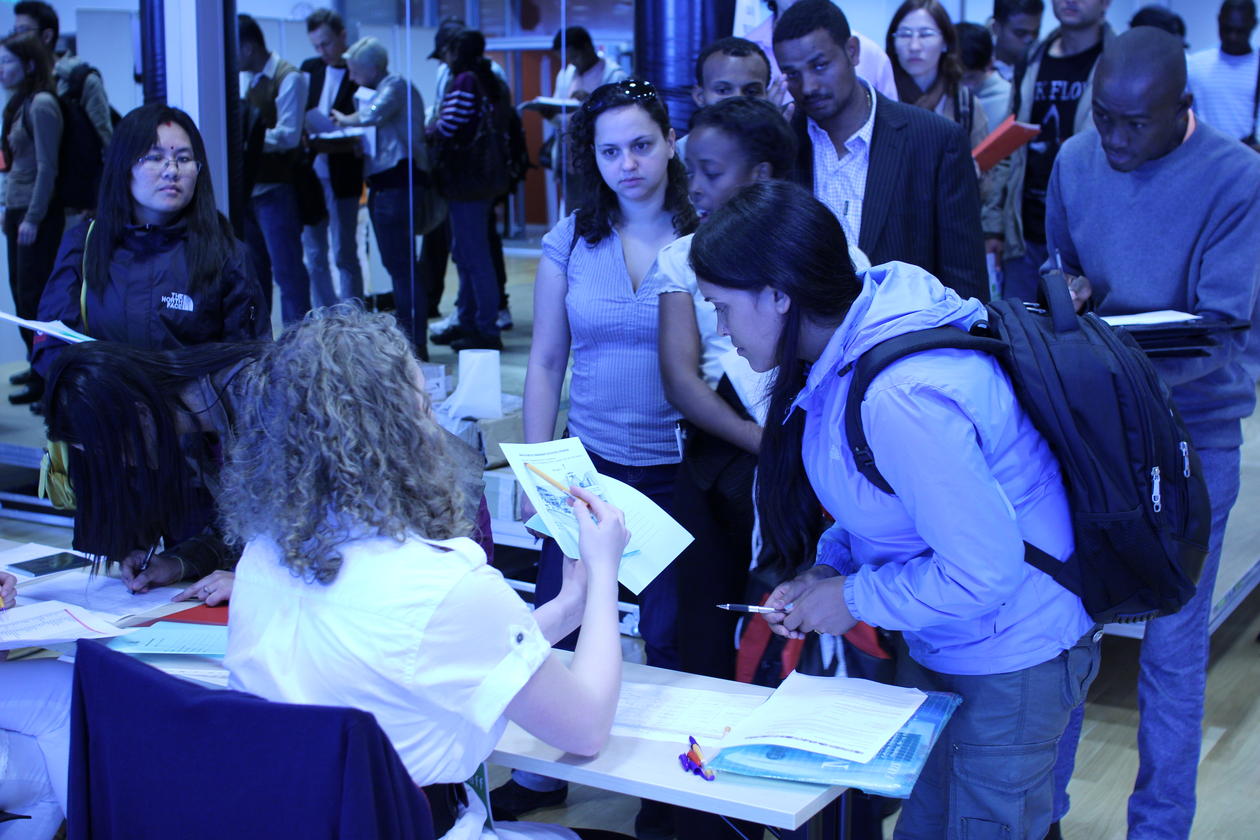