The secrets of the sea

When we humans change the chemistry of the sea, it’s up to the very smallest organisms to clean up after us. The question is whether they can cope with it.

GROW, EAT, DIE: In these tanks at Espegrend outside Bergen viruses, bacteria and plankton grow, eat each other and die, within three weeks. Postdoctoral fellows Antonio Pagarete, Rakhesh Madhusoodhanan and Paolo Simonelli fill the tanks with water from the outside bay.
Photo:
Eivind Senneset

We once believed that the sea was endless and unaffected by human activity. That was before we discovered that the Baltic Sea is full of fertiliser from farming that washes out with the winter rain. Or that all our dams retain silicate minerals in the rivers, that otherwise would have flowed into the sea where diatoms could have used them to build their shells. Or that our CO2-emissions are absorbed by the sea and lower the pH. Or that oil spills can threaten both fish and seabirds.

But what consequences do all these changes have? The only thing that is certain is that the smallest organisms feel the changes first. Microorganisms in the uppermost layers of water process nutrient salts, light and carbon, and create the basis for all other life in the sea.

“I've seen many proposals aiming to genetically modify bacteria so that they can break down oil spills. From an ecological point of view such proposals are nonsense,” says Professor Frede Thingstad. “Bacteria in the sea can already break down oil. But to do so, they need nitrogen and phosphorus. That limitation cannot be removed by genetic modification. If you fail to understand the ecology, you might risk doing a lot of stupid things.”

He is head of the research group in marine microbiology at UiB’s Department of Biology. For several decades, he and his colleagues have conducted research on the invisible life in the sea, and its role in the food chain.

“There are ten billion viruses in a litre of sea water. One billion bacteria. If you were to take the DNA material which exists in a litre of sea water and stretch it out into a thread, it would be 2,000 kilometres long,” says Thingstad. “That says something about how complex the microbiology of the sea is. Our research aims to try to understand how this system functions.”

An aquarium for bacteria

For this purpose, the researchers use so-called mesocosm experiments. Mesocosms are large water tanks where one can capture a tiny bit of the sea along with all life that exists there, and then change chosen environmental factors to see how the microorganisms react. During three weeks in June 2013, researchers filled 16 such tanks with seawater at UiB’s marine biological research station, Espegrend, on the idyllic coastline south of Bergen. Every day they took samples, counted organisms, measured chlorophyll, and examined DNA.

“We started with mesocosm experiments in the 1980s when it was usual to conduct observational research. One went out and looked at nature and measured and counted what existed there. We thought that was too complicated; one can’t understand the system that way. We had to try something simpler. And we’re still doing it,” Thingstad explains.

Several hundred international researchers, including several EU framework programmes, have used UiB’s mesocosm laboratory. The research in summer 2013 was a part of a larger ERC project, MINOS, which Thingstad leads, and various combinations of sugar, nitrogen and copepods were added to the tanks; the copepods feed on the largest microorganisms.

“Have you seen our box model,” asks Professor Gunnar Bratbak, who like Thingstad works in UiB’s research group for marine microbiology.

On the computer screen in his office he pulls up the model that is the basis for all the group’s research. Viruses, bacteria, algae and invisible animals are depicted in various sizes. Criss-crossing arrows show who eats whom, and who competes for nutrients. Bratbak tries to explain.

“If you add carbon, for example, as in an oil spill, the bacteria will do better and will eat a larger portion of the nutrient salts. That means that there will be less algae, because there is less food left for them.”

Together with Researcher Aud Larsen at Uni Research, Bratbak leads a project nicknamed MicroPolar, where they will examine how these correlations work in Arctic Ocean areas. That will involve several research expeditions to the Arctic Ocean, in addition to mesocosm experiments at the Arctic Research facility at Kings Bay in Ny-Ålesund, Svalbard, the northernmost permanent settlement in the world.

“We know very little about these colonies of microorganisms in the Arctic Ocean. A part of the MicroPolar project aims simply to go up there and take samples throughout a cycle of a whole year, characterise the bacterial colonies, phytoplankton and viral communities to find out what’s there. Moreover, we don’t quite know what the food chain looks like when the light is turned off in the winter,” he says before asking out loud. “Maybe it’s more active than we think; maybe bacteria and the organisms feeding on bacteria can live all winter on dissolved organic carbon which the algae have produced in the summer?”

Although the research group is interested in understanding the entire marine microbiologic eco-system, they are perhaps most interested in the smallest organisms, the viruses. The group was among the first to publish articles on the role of viruses in the ocean’s food web, and they have continued to work with viruses, even as new methods have made it easier to research them.

The only way viruses can reproduce is to infect a host organism, for example a bacterium or an alga, and use the host’s life processes to spread their genetic material. Viruses can be very specialised, and will often infect just one or a few types of organisms.

“There is a continual arms race between viruses and host cells,” says Professor Ruth-Anne Sandaa.

“Viruses can go in and overrule the host organism to promote the production of their own viral genes. There exist viruses with genes for photosynthesis. But viruses can’t conduct photosynthesis by themselves, so what are they going to do with the genes? What we think, is that the host alga shuts down photosynthesis when it is infected by a virus, as a defence mechanism,” says Sandaa. “But then the virus can respond by using its own photosynthesis genes to turn on activity in the host again, so that more viruses are produced. Such interaction between viruses and hosts is very exciting, because it can seem that anything is possible, and that only the imagination sets limits.”

She studies virus colonies in the mesocosms at Espegrend as part of MicroPolar. The most important method for learning something about viruses is to study their genes. The problem is that most viruses are unknown, and so it’s not easy to know what the DNA material you’ve got in front of you really means.

“That makes it difficult to classify them. But you have to map their genes to get information. We try to compare the genetic samples with other samples to see if they have anything in common or resemble each other; whether we can find any pegs to hang information on. Little by little we can begin to say something about which function the different genes might have,” says Sandaa.

Are there any species in the host community that disappear, while some species spring up in the virus community? Is there a connection between them? Do the viruses have few or many genes, and do they infect the small or the larger host cells? Because the organisms exist in such enormous numbers, such research creates endless amounts of data, and the challenges are increasingly about analysing the data.

A rain forest in the ocean

Unfortunately there is no simple answer to what happens to microorganisms when the environment in the sea changes. The geographic variations are great in the first place. Western Norway’s coast is the ocean’s answer to the rain forest: an enormous fertile and species-rich area, owing to nutrient salts and fresh water which are continually washed out into the fjords, and because the layers of water are mixed by currents and wind. By comparison, the Mediterranean is practically a desert.

“That’s not because it’s polluted, but because the currents carry out the nitrogen and phosphorus. The biogeochemical processes are so strong that the Mediterranean is very oligotrophic. That’s why the water is so clear there,” says Frede Thingstad.

A major question is whether the algae in the sea can store more of our CO2 emissions than they do today – without being eaten, so that the CO2 is released. But to increase production in just one part of the cycle is not easy.

“If the algae are not eaten, but sink to the bottom with the CO2, they’ll also take nutrient salts with them out of the system. Then the process will sooner or later cease,” says Gunnar Bratbak.

A range of projects have been launched to use algae to capture CO2. Bratbak is sceptical.

“If these algae are used for fish feed or fuel, CO2 will just be released again. The only way to remove it from the system is to bury the algae in a bog forever,” he says. “Furthermore it would take enormous areas to produce so much algae. Using biology to capture CO2 seems a little pointless to me. The only solution is to stop extracting oil.” 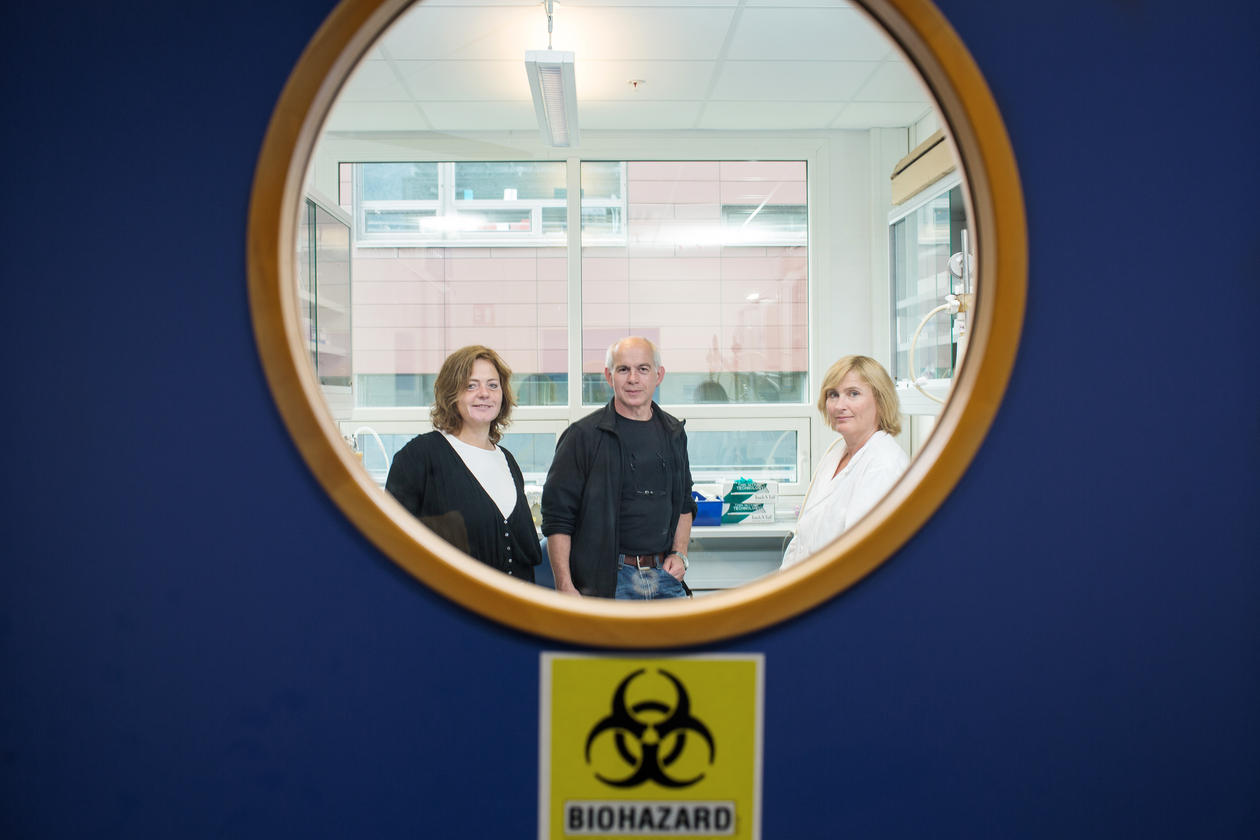 BRIEF OPENING: The microorganisms in the ocean have only hours in which to multiply before being eaten or infected by virus. The MicroPolar team (left to right) Aud Larsen, Gunnar Bratbak and Ruth-Anne Sandaa examine how the interaction between the organisms happens.
Photo:
Eivind Senneset 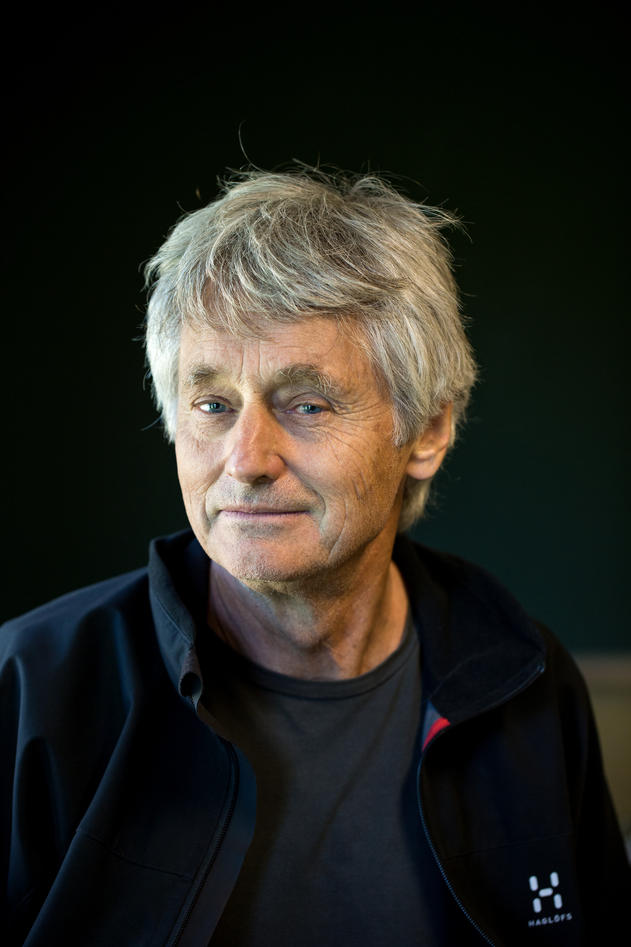