A delegation from UiB headed by Rector Sigmund Grønmo visited Makerere University to celebrate 25 years of collaboration between the two universities.

In 1988, the first collaborations between researchers at University of Bergen (UiB) and Makerere University (MU), in Uganda’s capital Kampala, started. In 1991, the collaboration was formalised. And in 1999, the two parties signed a comprehensive frame agreement on research collaboration, scientific competence building, student and staff exchange, and institutional development between UiB and MU.

– The Makerere-Bergen collaboration is historical, dating back to 1988, when Professor Endre Lillethun first visited Makerere University. The agreement is the longest single north-south institutional Memorandum of Understanding (MoU) that Makerere University has ever signed, said MU’s Vice Chancellor John Ddumba-Ssentamu at the official celebration of the 25-year collaboration at Makerere campus on 21 February 2013.

Ddumba-Ssentamu was greeting a delegation from UiB headed by Rector Sigmund Grønmo and Vice Rector for International Relations Astri Andresen, who arrived in Uganda after visiting other UiB friendship universities in Ethiopia and South Sudan.

– I am very proud that my own university has been involved in the far-reaching deep-going collaboration with Makerere University for more than 25 years. In fact, this collaboration represents the most committing international collaboration ever embarked upon by UiB. It is also based on a strong strategic commitment by both our universities, said Rector Sigmund Grønmo in reply to Ddumba-Ssentamu’s warm welcome.

– Our collaboration in an important academic field such as health can stand as an example. In the 1960s and 1970s, physicians travelled from Europe to Africa to perform various kinds of operations. Today almost all African countries have their own medical faculties. Our common challenge today is to work together on building research-based quality education for the next generation, Grønmo said. – For UiB these kinds of collaborations are a necessity. And our collaboration with MU has been especially fruitful and valuable.

As part of the celebration a number of joint research projects were presented. Only a few were selected as the cooperation has grown since the frame agreement of 1999 to include all six faculties at UiB, as well as the University of Bergen Library and the Grieg Academy, and their respective counterparts at MU.

– Our delegation is here to deepen and broaden our collaboration. We are strong in the belief that both our universities will continue to benefit from this collaboration. At its very core collaboration is always about people, and it has been a true pleasure for me to get to know the various people behind the Makerere-Bergen university collaboration during my visits here and the visits from Makerere in Bergen, Grønmo enthused.

Hundreds of staff and student have been involved in research and education projects between the two universities, and in October 2011 paediatrician Grace Ndeezi became the first joint PhD between UiB and MU.

– The collaboration has supported more than 168 Ugandan students to study at UiB. A significant percentage of this number has been members of staff of MU, who have received post-graduate qualifications, said Ddumba-Ssentamu. – These achievements have been possible because of the generous financial and human resource support from UiB.

The collaboration extends well beyond academic disciplines and also takes in capacity building. Something Ddumba-Ssentamu was keen to point out.

– Since 1999, UiB has significantly supported MU's core mission of teaching and learning, advancement of research, and knowledge transfer. It has enabled capacity building in our library, as well as in the departments of finance and human resources, he said. – I am also pleased to note that beyond academic training, our collaboration has nurtured a variety of high-level scientific and multi-disciplinary research projects. The collaboration has made it possible to obtain support equipment and laboratories.

Looking back, both Ddumba-Ssentamu and Grønmo pointed to many successful collaborative projects under the Norwegian Programme for Development, Research and Education (NUFU) umbrella. They were also looking forward to joint future success with NUFU’s successor programme, Norwegian Programme for Capacity Building in Higher Education and Research for Development (NORHED).

Both university leaders particularly singled out the work done by coordinators Professor Edward Kirumira of MU and Professor Thorkild Tylleskär, who chaired the celebration proceedings.

Ddumba-Ssentamu and Grønmo then turned their attention to the importance of international collaboration.

– Our collaboration has contributed significantly towards the internationalisation of our two institutions, an aspect recognised by both universities, said Ddumba-Ssentamu.

– I strongly believe in committed and mutual international cooperation and networking amongst academic institutions and individual scholars as means for better research and education. Not least since many of the problems and challenges we are facing today are global issues, Grønmo pointed out.

The celebration ended on a high note when it was revealed that the current 15-year frame agreement, which lasts until 2014, will be extended for another period. Hence the collaboration between UiB and MU will be continued and strengthened in the years to come. 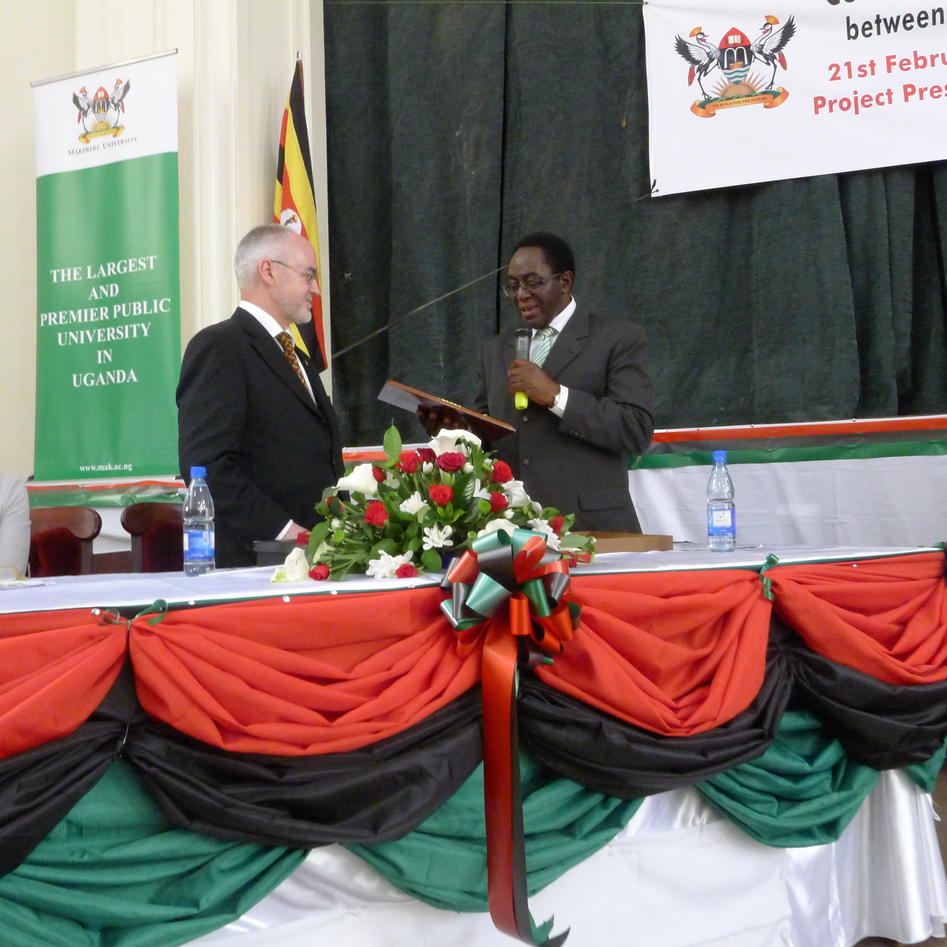 Vice Chancellor John Ddumba-Ssentamu and Rector Sigmund Grønmo presented each other with gifts as part of the 25-year collaboration celebrations between Makerere University & University of Bergen in Kampala, Uganda on 21 March 2013.
Photo:
Sverre Ole Drønen