The grand puzzle of climate research

At the Bjerknes Centre for Climate Research, more than 100 climate scientists work to study the climate – past, present, and future. The centre celebrates its 10th anniversary in 2012.

The Bjerknes Centre for Climate Research celebrates its first decade in 2012 — a ten-year anniversary conference took place 3-6 September — and has established itself as the leading natural sciences climate centre in the Nordic region. Eystein Jansen is head of research and was heavily involved in the establishment of the centre in 2002. Today the centre has more than 100 scientific staff, about half of whom are from outside of Norway.

– Over the last decade, the Bjerknes Centre has been recognised as a major academic participant in climate research. But just as important is the fact that we have been recognised for our work in society outside of academia as well. We provide knowledge that is useful. It has always been our aim to be relevant and this is particularly obvious in our basic research, says Jansen.

He believes there is one particular reason why the research at Bjerknes is of such high quality.

– It’s the people here. We simply enjoy working together. There is diversity and a lot of interdisciplinary action, which means that the research expands into new areas all the time. Our research demands heavy-hitting teams with broad expertise across disciplines, he says.

Read about the Bjerknes Centre's involvement with the next IPCC report here.

Like a large puzzle, the scientists, working in five interdisciplinary groups, create a bigger and clearer picture of climate change – past, present, and future. the overall goal is to understand and quantify regional climate change as part of the global climate system.

Geologist Bjørg Risebrobakken and atmospheric scientist Camille Li are two of the centre’s best puzzle solvers. Together, the two lead the four-year project DYNAWARM: Dynamics of Past Warm Climates at the Centre for Climate Dynamics (SKD), a Bjerknes offshoot.

A physicist by training, Camille Li decided to go into atmospheric sciences after her bachelor’s degree. She has worked at Uni Research and Bjerknes for approximately a year, and before that for three years at UiB. She chose to join Bjerknes because the expertise in paleoclimatology and physical oceanography would allow for exciting interdisciplinary work.

– There’s a great enthusiasm and wide expertise at SKD and the Bjerknes Centre. It’s a mix of people from different disciplines, and the effort we’ve put into understanding one another and working together is well worth it, she says.

She believes the interdisciplinary work methods at Bjerknes are unique.

– I’ve worked in other projects where we wanted to do this, but didn’t quite succeed. I think Eystein has established an environment where cooperation between disciplines is possible. He’s seen how important it is for climate research to move in this direction, Li suggests.

Bjørg Risebrobakken agrees that the interdisciplinary approach taken at the Centre strengthens the research at Bjerknes and the DYNAWARM project.

– At Bjerknes we have teams with different skills, that are able to view things from several angles and provide us with a larger picture, she says.

By extracting columns of sediment from the bottom of the ocean, the DYNAWARM researchers explore how climate has changed through the ages. There is every indication that there have been periods when the entire planet, including the polar regions, was very warm.

– Fossil remains have been found of forests in the Arctic and Antarctica, and hippopotamus teeth in the arctic regions of Canada. The climate certainly must have been quite different from what it is today, Risebrobakken suggests.

According to Risebrobakken, the objective of the project is to understand how and why these warm climate periods existed, and develop an increased awareness of the interplay between the atmosphere, the oceans, and the cryosphere. Many different factors can contribute to climate change, such as variations in solar radiation, atmospheric greenhouse gas concentrations, sea level, and tectonic regimes.

The past helps to predict the future

Knowledge of climate in a historical perspective is crucial if we are to understand the complexity of the climate changes currently taking place, and to distinguish between natural variations and human-made climate change.

– Right now, the earth’s climate is warming at a very fast rate. The last time atmospheric CO₂ concentrations were this high was 2.5 to 3 million years ago. Looking into past climates can give us an idea of what might happen in the future, says Li.

– What will happen if the global temperature rises by 3° C? Our research gives us insight into long time scale processes and lets us see what climate conditions were like when the global temperature actually was 3° C higher than today. Not only is this exciting material to work on, it is also essential work. It is a puzzle, where we find small bits here and there and put them together to see the bigger picture, Risebrobakken says.

• The Bjerknes Centre for Climate Research celebrates its tenth anniversary in 2012.

• Consists of four partners: the University of Bergen, Uni Research, the Institute of Marine Research, and the Nansen Environmental and Remote Sensing Center.

• The scientific staff consist of more than 120 researchers and scholars, hailing from Norway and several other European countries, the United States, Canada, China, and a number of countries in Africa, Asia, and South America.

• The Centre had more authors in the last IPCC report than any other Nordic research institution, and is one of four European centres that contributed climate scenarios to the report.

• The Centre coordinates Norwegian activities for developing climate models/earth system models in advance of the next IPCC report.

• The centre is named after Vilhelm Bjerknes and his son Jacob Bjerknes, who were the leading figures of the «Bergen School» of the physics of atmosphere and ocean. 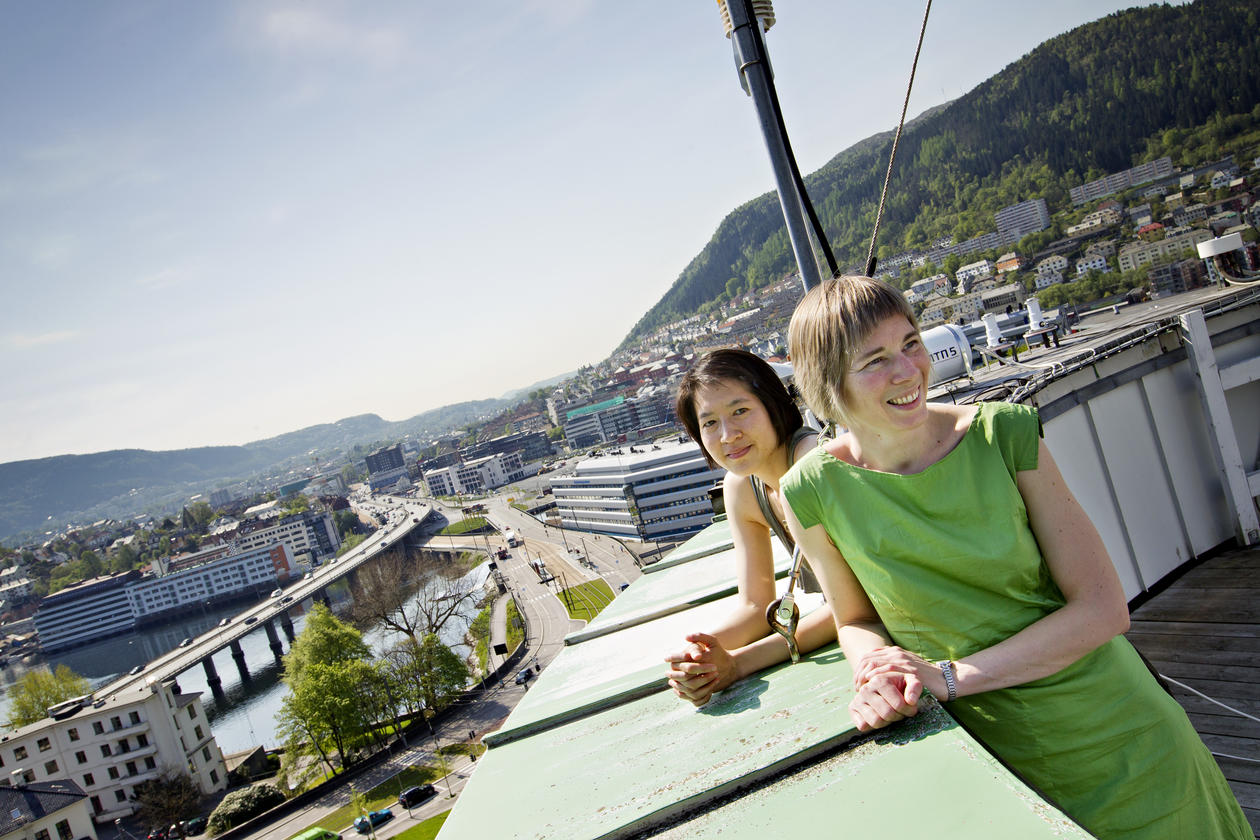 Researchers on the roof of Bjerknes Centre for Climate Research. Picture shot in May 2012 specifically for Hubro international edition 2012/2013.
Photo:
Eivind Senneset