New research shows that the human brain was surprisingly advanced more than 100,000 years ago.

– Only ten years ago, no one believed that modern man came from Africa, says Christopher Henshilwood, Professor at the Institute for Archeology, History, Arts Theory and Religious Studies at the University of Bergen.

This month Henshilwood and his colleague Benoit Dubreuil have an article in print in the internationally acclaimed academic journal Current Anthropology. Here the duo discuss two periods in Stone Age southern Africa. Somewhere between 59,000 and 77,000 years ago major changes took place in the ancient human societies. The article combines practical research from excavations with theories of the evolution of the human brain and neuroscientifical data.

Henshilwood and students from Bergen have made excavations in South Africa, in what has been a French-Norwegian-South African collaborative project. The basis for the recently published article is the discoveries at Blombos Cave, on the southernmost tip of Africa. Ten years ago, this became the location of what is now regarded as the world’s oldest known artwork – ocher stones with abstract engravings.

The discovery created attention because it implied that communication in ancient times was more advanced than previously imagined. The article discusses theories of brain development that may explain the level of invention amongst humans in the area at the time.

– In our age we use symbols all the time. In our language, by what we wear, how we have our hair cut, and so on. These ancient abstract engravings are also symbols, and the use of them indicates that symbols were used and understood amongst these early humans in ways we didn’t previously imagine, says Henshilwood.

The team found several examples of a modern material culture in the South African caves. Especially startling were the finds of jewelry, pendants, and ornaments.

– Humans are the only animals to wear pendants. These people used shell beads to convey a message to other individuals. Things that are symbolic and abstract need interpretation and as such show more evidence of sophistication in these people.

The oldest known objects before these findings were less than 30,000 years old and found in Europe. Not only does this shift the focus to Africa, but also shows that advanced symbolic artefacts existed as early as 80,000 years ago. This implies that modern human culture did not originate in France, as previously thought, and that the history books need to be rewritten.

– If you are searching for your ancestors, you will have to look to Africa now, Henshilwood suggests.

Henshilwood and Dubreuil’s main point is that the human brain was so advanced even more than 100,000 years ago that people could understand each other’s purposes and wishes. This improvement in intelligence led to major changes in the material and social life of humans at the time.

– If I tell you that you are a “bloody stupid idiot”, you don’t really need to reply for me to understand roughly what you’re thinking. You could say that we are capable of reading each others mind.

The capability to interpret other people’s attitude grew increasingly important when there were only between 10,000 and 30,000 people in all of Africa. These people were living in groups of 30 to 40 people, and mainly isolated. Only now and then did they meet other human beings.

– They exchanged gifts and partners, as they couldn’t multiply internally infinitely. To organise meetings they must also have developed some system to track time. Social cohesion has been essential in building these early human societies.

The discoveries have made headlines worldwide, and the project – entitled TRACSYMBOLS – has now received further funding which will lead to more excavations in South Africa. The full article by Henshilwood and Dubreuil can be found in the latest issue of Current Anthropology. 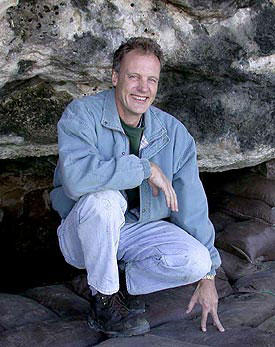