Mahmoud Suliman Bashir’s love for the weapons and ornaments of the Iron Age made him one of the stars of the BBC series “Lost Kingdoms of Africa”.

Growing up in Sudan’s capital Khartoum, Mahmoud Suliman Bashir dreamed of being a drummer. He even applied to study music at the University in Sudan. But due to a series of unfortunate events, he ended up studying archaeology instead.

– It was actually quite lucky that there were so many applicants for the music course that year at the university, Bashir muses when he looks back at it now and adds with muted understatement. – It was a bit of a coincidence that archaeology was my second choice, but it has turned out quite well.

The 40-year old’s status in the world of archaeology has skyrocketed after an assured performance on the BBC’s “Lost Kingdoms of Africa”, a four-part television series first broadcast in the UK in 2010. It was shown on Norway’s state broadcaster, NRK, in the spring of 2011.

The series made his name known not only to fellow archaeologists, but also to a general audience interested in the ancient civilisations predating the colonisation of the African continent.

In 2000 he joined the Sudan National Museum where part of his job was to accompany foreign archaeologists visiting Sudan’s ancient treasures. By chance he became the guide for renowned Norwegian archaeologist Randi Håland, when she needed a local guide for a project on iron production in neighbouring Ethiopia.

Håland was impressed by the enthusiasm of the young archaeologist and suggested that he apply for a scholarship to do his master degree at the University of Bergen (UiB). And in 2004 Bashir left the stifling heat of the Sudanese desert for the rainy city on Norway’s west coast.

Bashir became inspired by the Iron Age objects he discovered in Norway. This led him to become one of the foremost experts on the Iron Age in his native Sudan, where he was appointed field director upon his return.

– Being a field director is a big thing in the career of an archaeologist, he explains whilst admitting that he never planned on getting this far and humbly points out how much of his progress so far has been due to circumstance rather than part of an ambitious plan.

– When I got back there was a huge amount of work and broad contact with archaeologists in other African countries working on similar projects, he tells about returning to Sudan. – There were a great deal of rescue projects that we needed to get involved in right away, because there is so much construction work going on – especially in the Nile basin.

His interest in the Iron Age and his master degree from the UiB led directly to his involvement with the television series. One of the shows in the series focuses on the lost kingdom of Nubia, in the north of Sudan.

– Because of my position as a field director, an American colleague suggested me as a candidate for the series. So there is a direct connection with my studies in Bergen and the work this led to on my return to Sudan, he says.

– At the time I was busy working on a big rescue project because of the building of a dam in the Merowe area in the north of Sudan.

Because of the ambitious plans of the Sudanese government to build several dams to make use of the power and water of the river Nile, Bashir and his colleagues continually find themselves working against the clock to try and preserve the hidden treasures of Sudan’s past. A country where there are more pyramids than in Egypt.

He has spent a month this summer at the UiB. First for the Bergen Summer Research School and then for advice on his Ph.D. dissertation from his mentor, Professor Randi Håland. But he’ll be heading back to Sudan soon for more field work.

– I spend more time in the field than in my office these days. I guess it’s about eight months a year in the field. The time I spend outdoors has been growing since I returned from Norway in 2006, he says.

– Part of our work is to assess what archaeological sites to rescue. And there are only five field directors and seven dams being planned along the Nile, so we have our work cut out, he says and admits that it’s challenging to always get the understanding of the contractors who build the dams.

– When developers are working on a new project, they are supposed to report if they hit upon findings that could be of archaeological interest. On my current project to dig in the Berber area, some of the graves that we are working on have been damaged by bulldozers, he tells us about his current excavation project north of Khartoum, in what was the heartland of the ancient Nubian civilisation in the Meroitic Period.

Having said that, he points out that his television appearance both gave him a private boost and highlighted the challenges ahead for all those who wish to preserve the ancient history of his home country.

– After watching the series, I remember feeling happy about sharing what I was doing with others. Most important for me was that I was able to get the producers of the series interested in the connection between archaeological discoveries and the life of ordinary Sudanese today, he says and flashes a smile.

– I proposed that we look at the iron work of the old Nubians and how this tradition is alive and well in the Meroë area today. In this way I was able to highlight some of my own interests and also to bring something back to the community.

Not only did the series show production of iron tools by blacksmiths today, but also showed other old Nubian traditions to be alive and well – from Nubian wrestling to traditional pottery production.

– By getting them to interview blacksmiths today, I wanted to show that Sudan is more than big buildings, pyramids, temples and palaces, Bashir says.

The archaeologist also sees similarities between Iron Age weapons and ornaments he has observed at museums in Bergen and Stavanger and the ones he has found through his own work in Sudan.

When overwhelmed by the daunting task of preserving Sudan’s ancient history, Bashir finds solace in the discoveries he’s made so far. Above all the rock gong – an ancient drum made out of rock – which is demonstrated in the TV series. For Bashir finding the rock gong had a special relevance on a personal level.

– I still practise my drumming at home on a hobby basis. But finding the rock gong both gave me an opportunity to hone my skills as a percussionist and also made me feel connected with the ancient past of my own culture, he says proudly. 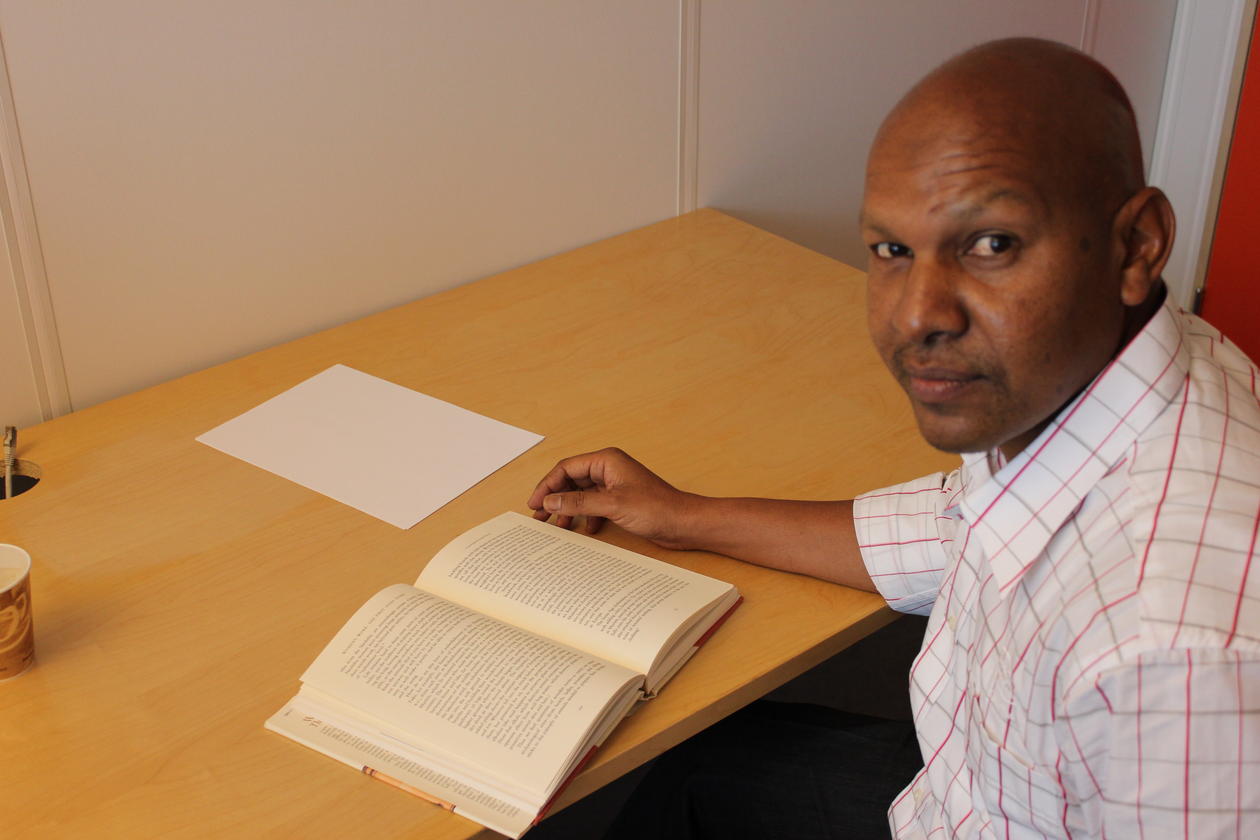 Mahmoud Suliman Bashir reading background literature for his Ph.D. thesis at the University of Bergen in the Summer of 2011.
Photo:
Sverre Ole Drønen 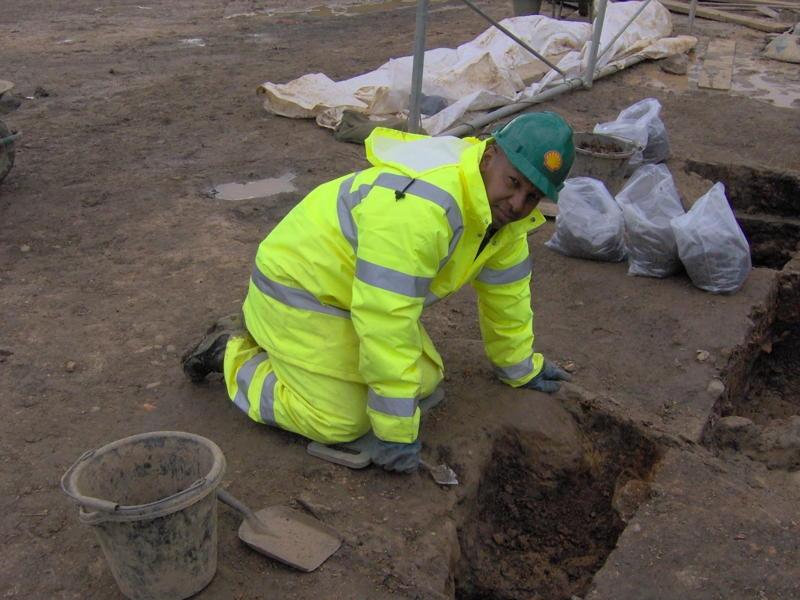