Archaeologists from the University of Bergen have made discoveries in South Africa that represent a turning point in human evolution.

University of Bergen (UiB) archaeologists have been digging into evidence at a site of early cavemen, showing that early human beings performed chemical experiments and were into long-term planning.

These discoveries are now published in an article in the current issue of Science magazine, and are based on findings at Blombos Cave in South Africa, where the scientists from UiB have been involved in a project and also made remarkable discoveries earlier this year.

The camp found at Blombos Cave is 100,000 years old and has fielded a number of discoveries about early mankind. Earlier this year the discovery was made that humans at that time were able to interpret the intentions and desires of other, in contrast to what has been assumed previously. The new article in Science shows that these early humans were also into producing craft and long-term planning.

Professor Christopher Henshilwood from UiB’s Institute for Archaeology, History, Arts Theory and Religious Studies is head of the project. He and adjunct professor Francesco d’Errico wrote the Science article. A group of students from the Institute have also worked at the site, which is on the southern tip of Africa.

At Blombos Cave Henshilwood and his team discovered that early humans not only used ocher, the coloured earth which is regarded as the first paint used by humans, earlier than estimated, but that they actually produced the ocher themselves.

Research also shows that they were able to store the ocher over time and the ability to produce and store items in this fashion represents a turning point in human evolution.

The research group also found evidence to support the use of abalone shells used to store a red mix of ocher, bone matter and charcoals. The cavemen have been very inventive. The shells are perforated and must have been plugged in order to be used as storage boxes. The discoveries that are now presented in Science show that Africa’s cavemen possessed an elementary knowledge of chemistry and a capability to perform long-term planning.

The group’s work in South Africa is part of the TRACSYMBOLS project and is ongoing. 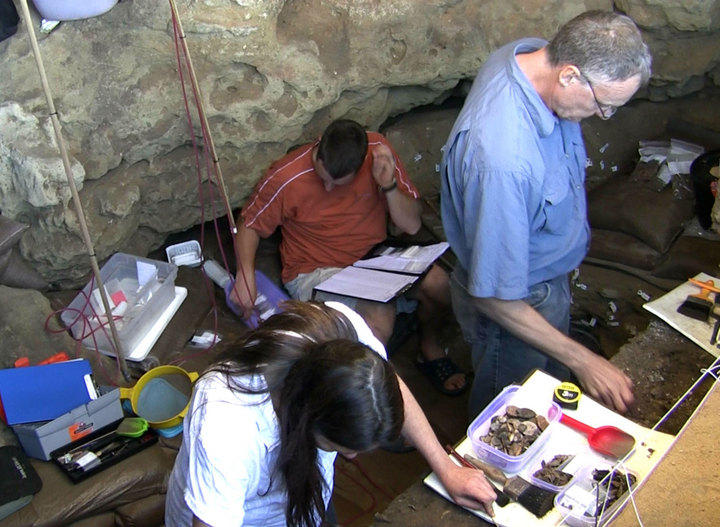