By studying the microenvironment where cancers develop, UiB researchers hope to identify and stop the danger cells that cause the disease.

FIGHTING CANCER: The recently established Centre for Cancer Biomarkers is fighting back against what they like to describe as psychopathic cancer cells.
Photo:
CENTRE FOR CANCER BIOMARKERS

Cancer has been on the increase for a long time. Not least in the world’s industrialised countries, more and more people are diagnosed with different types of dangerous malignancy.

Norway is no different. One in three Norwegians is diagnosed with cancer in their lifetimes. In addition, most of us carry around microscopic tumours that neither grow nor spread.

That is, until the tumours turn against their host and become aggressive.

“Cancer is like a psychopath. Just like a psychopath, a tumour doesn’t care much about its surrounding environment,” says Professor Lars A. Akslen at UiB’s Department of Clinical Medicine. “They grow out of control and spread to damage their surroundings and the ‘society’ of the host.”

Professor Akslen heads the Centre for Cancer Biomarkers, one of three new additions to the Centres of Excellence (SFF) scheme at UiB.

By studying how cancer cells develop and how they behave, Akslen and his research team hope to determine the causes for why some tumours become psychopaths whereas others don’t. The goal is to develop better diagnostics and more accurate treatment.

“Today, there is an intense focus amongst researchers on the genetic material found in the cancer cell itself. We believe a lot can be gained from studying how the microenvironment around the cancer cells, such as blood vessels and the supporting matrix, affect the tumour and vice versa,” says Akslen. “You could call what we’re doing sociology on a biological microlevel.”

Previous research has shown that there are certain mechanisms in the cancer cells’ environment that try to limit the spread of tumour cells. In other tumours, this protection is lost, and the microenvironment has been ‘convinced’ to support the tumour cells and their spread, against the interests of the host.

One of the cancer types that Akslen’s SFF group is paying special attention to is breast cancer, the most common cancer amongst women. The researchers have found that the most aggressive tumours are surrounded by a large number of blood vessels. In fact, the tumour makes existing vasculature do the tumour’s work, so that the tumour can grow and spread.

In order to find the biological mechanisms that support this dynamic between tumour and blood vessels, the researchers are using cancer cells and vascular cells from both animals and humans. Cells are grown in laboratory and used for different models.

“The overall objective is to find ways to block access between the blood vessels and the tumour, in order to stop the tumour from being aggressive,” says Postdoctoral Fellow Monica Mannelqvist at UiB’s Department of Clinical Medicine, a member of Akslen’s team.
Whereas there is medication available today that blocks blood vessels, this medication only works in some patients. One of the problems when cancer develops is that there are many different types of cells present in a tumour, which means that even the same type of cancer behaves differently from patient to patient.
“We are trying to discover more about the complex biological mechanisms that underlie the behaviour of malignant tumours, and why some of them respond to treatment, and others don’t,” says Mannelqvist, “the goal being to create a tailored and personalised medicine that suits both different types of cancer and individual patients.”

In order to provide better diagnoses the researchers also hunt for so-called biomarkers in a cell’s environment. A marker is a characteristic that distinguishes the different tumours from one another. Such markers are usually proteins, which a certain type of cancer cell has in abundance.

Protein markers are examined under the microscope using colour reactions, which help researchers to distinguish between different types of cancer and how aggressive they are.
“Biomarkers are the beacons that help the physician to navigate and improve the chances of a precise diagnosis or direction, thus allowing for better treatment,” Akslen explains.

Even with a decent prognosis, for instance in breast cancer, there is always a danger that some cancerous cells will spread. As a result, and to be on the safe side, health care professionals are inclined to overtreat some patients.
“If we can develop targeted therapy that is directed squarely at the tumour mechanism, there is every reason to hope that we can avoid the overtreatment of patients that we see today and the subsequent side effects of this,” Mannelqvist believes.
Akslen adds that there is an abundance of new, smart drugs aimed at different types of cancer entering the market. However, there is a striking lack of accompanying biomarkers that can guide the use of these drugs.

Using markers for different cancers, the physicians can better see in advance which patients will benefit from a certain drug. This is why Akslen and his team want to identify both new markers and conduct clinical trials to develop tailored drugs, medication that very precisely attacks the troublesome proteins and signals in the cancer cell.
Akslen believes that a more detailed assessment of the cancer cells will save the healthcare system large amounts of money and prevent the patient from experiencing side effects from the medication.
“The way medication for cancer works today can be compared to a shotgun blast. You shoot away, the bullets spread, and you hope that some of them actually hit the target,” says Akslen. “The problem is that the bullets that miss may do damage elsewhere, i.e. create side effects. Our goal is to replace the shotgun approach with precision-shooting, by using biomarkers to hit the target.”
(Translation: Sverre Ole Drønen.)

This article was printed in UiB's research and education magazine Hubro international 2013/2014. If you want a printed copy sent to you free of charge, please send us an email. 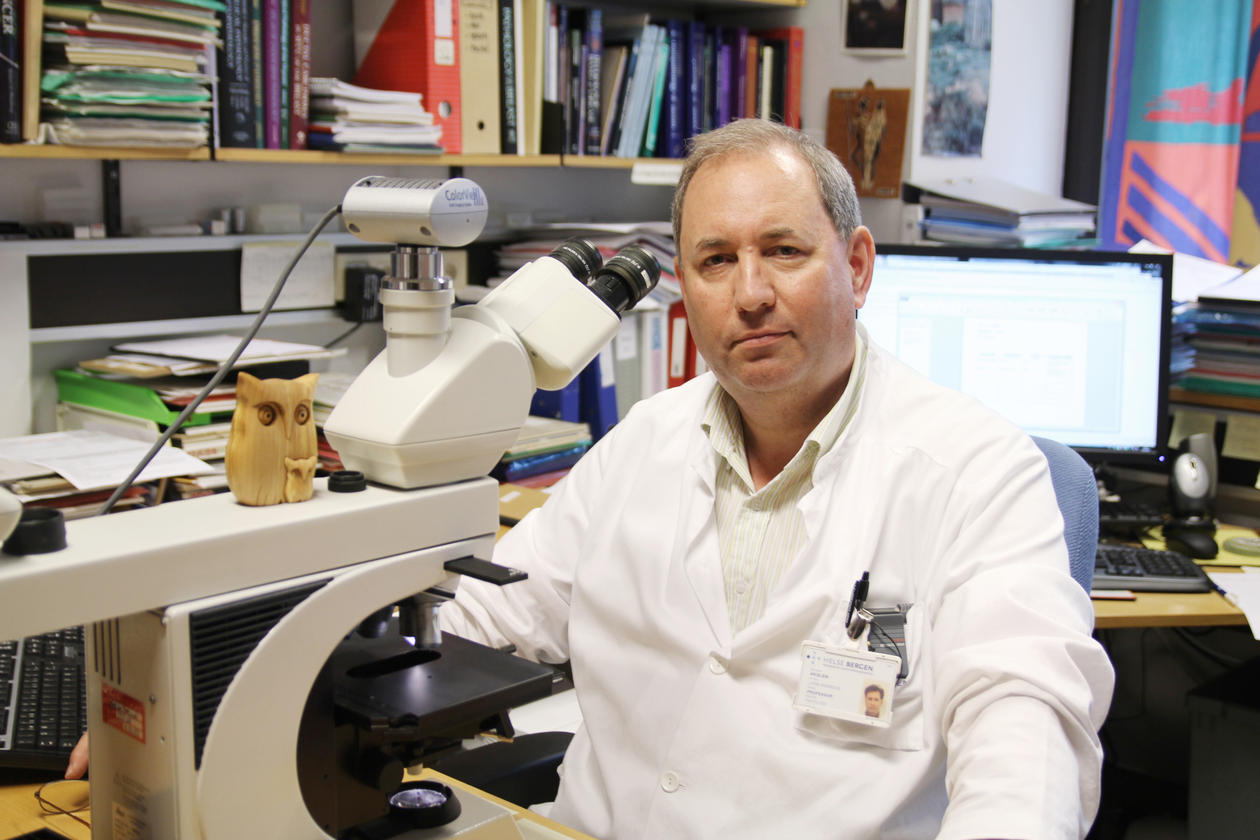 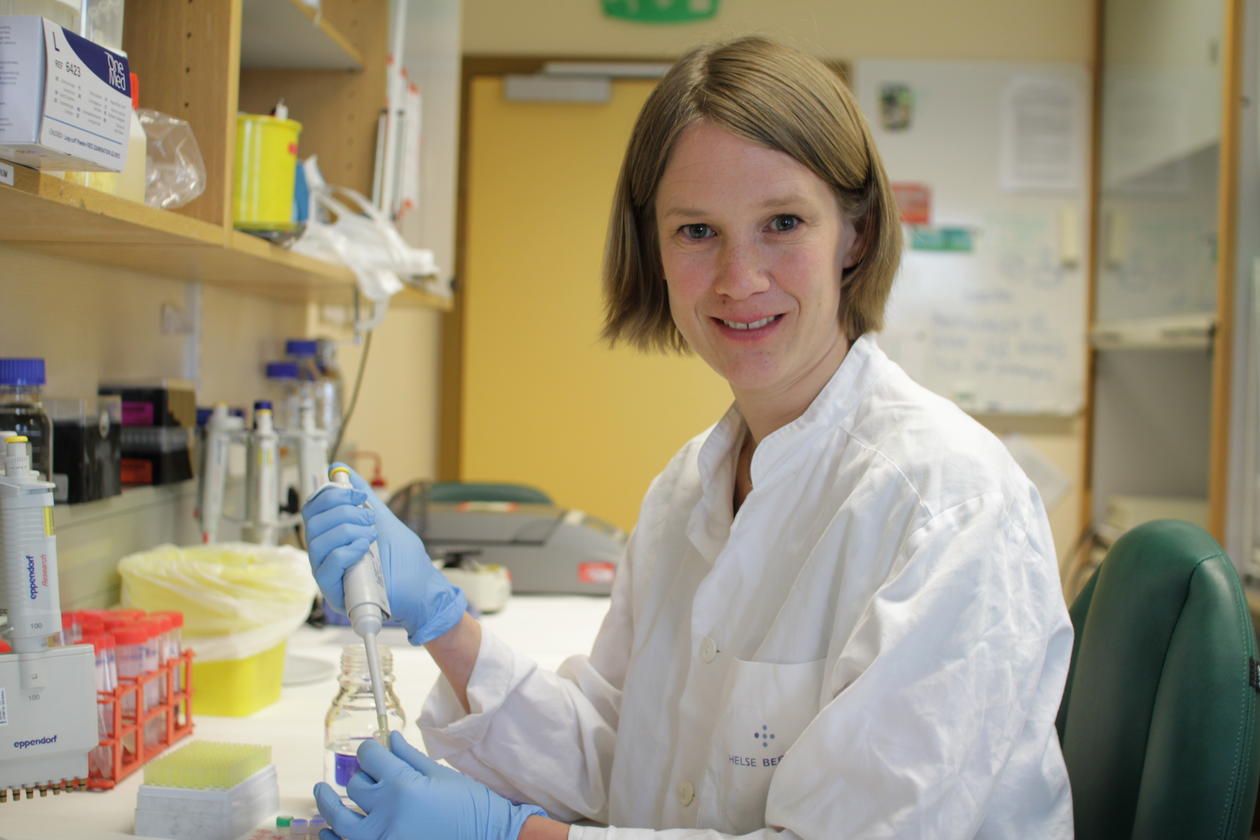