The higher education system needs to transform itself to solve the global challenges of poverty reduction, health policy, and climate change.

This was the central element of the thought-provoking key note lecture by Professor Asuncion Lera St. Clair at the opening of the fourth Bergen Summer Research School (BSRS) this morning.

The subject of Professor St. Clair’s lecture was “Global Challenges and Higher Education: Creativity, Leadership, Self-Reflection, and Tolerance”. Using a PowerPoint presentation she stressed the importance of academics to engage with society at large.

– We need to rethink our actions and academic responsibility, St. Clair argued. – The moment you have a higher education degree, you are in opposition of power.

She singled out thinkers throughout the ages (“Rene Descartes is guilty, in separating mind and body”) for leaving academics stranded in what many ordinary people perceive as a gated intellectual society.

– We need to focus on three interconnected global challenges: Poverty, health, and climate change. This needs to be grounded on the principles of sustainability, equality, and respect for human rights.

St. Clair turned to the old adage of how bad things often go together.

– Climate change creates new health problems and worsens those we already have. This again leads to increased poverty and inequality. Those most affected by an economic crisis or rising prices are the poor and vulnerable, she argued.

But conversely it’s not necessarily so that good things lead to even better things, at least not for all people.

– It doesn’t make sense to talk about rich countries and poor countries. I like to use the United States as an example, she said and showed two maps showing poverty levels in US counties and how poverty becomes entrenched in pockets of American society, even when great wealth is accumulated in the country as a whole.

St. Clair then showed a picture of the founding fathers during the American Revolution.

– There is this idea that democracy and wealth always go together, but this is not always the case, she argued pointing to said poverty levels in the US.

Further pointing out that there is no easy cure to combat poverty, health inequality and climate change, St. Clair argued that academics rather than being only philosophical about these issues need to become activists as well. Using the resources and the opportunities granted them through education and knowledge. But first of all to ask questions about existing power structures.

– By pointing out structural challenges, we can find causes of the problems in lack of access to food and basic health services. This shows that existing structures do not benefit all citizens, St. Clair said. – Poverty is not just about lack of economic growth, but also a violation of human rights.

Using two books about the holocaust as examples – Zygmunt Bauman’s “Modernity and the Holocaust” and Mike Davis’ “Late Victorian Holocausts” – she pointed out the fallibility of the idea that modernity could somehow replace traditional norms and values.

In order to engage a wider audience, St. Clair believes that academia needs to do more than simply to refresh itself on the inside. If academics are to challenge the powers that be and being shown to feel responsibility for people outside the walls of academia, then more intellectuals need to break out of existing structures.

– I’m not saying that we necessarily close down the faculties as we know them, she said before suggestively adding. – Then again, maybe… 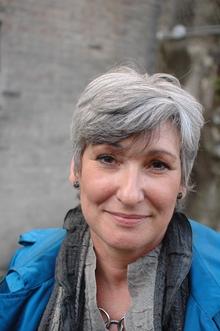 Professor Asuncion Lera St. Clair wants academics to get down from their high horse and engage more strongly with a range of issues at stake in a globalized world.
Photo:
Kim E. Andreassen