The ties that bind

Every year the University of Bergen (UiB) awards the Christie Prize to an individual or a business who has contributed to increase the collaboration between research and education on the one side and arts, business and society in Western Norway on the other. The prize is awarded at the Christie Conference, which takes place on 25 April 2012.

– This is a very important prize, which directs attention to the activities of both the university and the prize winner, Dean at the Faculty of Social Sciences Knut Helland says.

The prize money is for 250,000 Norwegian kroner and the prize has previously been awarded to Marit Warncke of the Bergen Chamber of Commerce and Industry and the publishers Vigmostad & Bjørke. Knut Helland hopes for many good proposals for candidates for next year’s prize.

– We are hoping for a wide range of suggestions, Helland says. Proposals may be sent to christiekonferansen@uib.no before 1 February 2012.

The Christie Prize is named in honour of Wilhelm Frimann Koren Christie. He was one of the founding fathers of the Norwegian Constitution in 1814, President of the Norwegian Parliament and co-founder of the University Museum of Bergen. 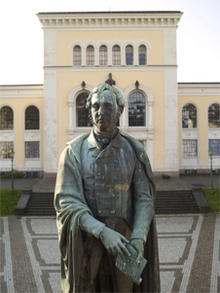 The Christie Prize is named after Wilhelm Frimann Koren Christie, whose statue can be found in Muséplass.
Photo:
Thor Brødreskift