AFRICA AND THE NORDICS: The annual SANORD meeting 2013 was yet another acknowledgement of the ties that bind universities in southern African countries and the Nordic countries together. Discussions were wide-ranging, and UiB’s representatives were keen to stress the importance of gender equality in academia.
Photo:
Colourbox

As always the University of Bergen (UiB) was well represented at the SANORD conference, which this year was held in Malawi’s capital Lilongwe in the first week of December. Yet this also was a time of change for UiB, with both the former and present vice-rector for the university’s international work present.

We spoke to Astri Andresen, former UiB vice-rector and also outgoing chairperson of the SANORD council, and Anne Christine Johannessen, UiB vice-rector since 1 August 2013 and new chairperson of the SANORD council, about the conference and how universities and the academic community can contribute to reducing poverty and empowering people – key themes at the conference.

The importance of networks

What do you believe was the main achievement of this year’s SANORD conference?

“SANORD is an organisation that works to enhance the institutional and academic collaboration between the north and the south. A meeting like the one in early December is important in this context,” says Astri Andresen. “SANORD reinforced its importance through the great support showed by university leaders and scholars from both north and south – not least visible in the vibrant discussions on the role of universities in modern society.”

“This being my first SANORD conference, what I noticed was how important this is a meeting place. On the one hand between universities in the south and the north, but also between universities in the south,” says Anne Christine Johannessen. “On the one hand there is the academic discussion on given subjects, on the other hand the interaction and the personal networking a meeting such as this allows for.”

The United Nations’ millennium development goals (MDGs) were central to the debate at SANORD, and Andresen likes to stress the link between the MDGs and what universities can do.

“The discussions at SANORD showed that universities play a clear role in providing knowledge no one specifically has requested, but which, however, is important for cultural, social and political change,” says Andresen before adding that UiB has a lot to be proud about when it comes to the work to end poverty. “UiB researchers engage broadly with all the MDGs and it is essential to still engage with free and critical research – in other words, do what universities are expected to do.”

At the conference, Andresen herself suggested, on behalf of the SANORD council, that the organisation gradually expand from today’s 43 to 50 member universities.

“There already exists a dialogue between SANORD and several relevant countries that currently are poorly represented or not represented in the organisation,” Andresen says. “SANORD must demonstrate to these potential new partners that it has something to offer both on the management and on the research side, and, in line with the new policy, also when it comes to student exchange programmes.”

Johannessen agrees with this and adds.

“A lot of good work has been done at SANORD in a short period of time. But I also see the potential for building a more effective organisation that can contribute to building capacity in our southern partners,” she says before taking a more overall view of north-south relations.

“Knowledge and building knowledge are our main contribution to society. Our major strength as a university is that we can do this independently of the political situation,” Johannessen believes. “We can stand as a pole in any country and help our partners to build their base in research and education, both those that are members of SANORD and our other collaborating universities in the south.”

At the conference there were plenty of discussions about the way forward for SANORD.

“There is great potential in the organisation and its network,” says Johannessen, who, however, believes that more needs to be done between meetings.

Then again, Johannessen acknowledges, SANORD is still a young organisation with great potential. So she sees plenty of possibilities of building on many of the promising ideas debated at the Malawi conference. She agrees with several of the proposals presented in the closing speech by Professor and Deputy Vice-Chancellor Eva Wiberg of Lund University in Sweden.

“Establishing a student leader group, as Wiberg suggests, is worth pursuing. Also introducing MOOCS, if this can help students in low-income countries, is good,” she says before adding that she believes in clear priorities and hopes to contribute in developing a more long-term strategy for the SANORD collaboration now that she is chairperson. “Women, equality and education is another very important issue for us. And raising awareness about how universities in the south can use their potential for political change.”

Johannessen also believes that UiB and the other Nordic universities in SANORD can look at their capacity building projects in order to improve standards at partners in southern Africa, but urges caution.

“At UiB, we are involved in a number of capacity building projects with various partners, not only within SANORD. We need to make sure that we don’t overstretch but rather pick projects that make a real difference,” she says. “But I believe that SANORD can help to improve our network and to make it stronger for the future.”

For Andresen the meeting in Malawi was her last official task as chairperson for the SANORD council. But she hopes that certain issues will remain on top of the agenda also for the new council.

“Top of the list is putting the spotlight on gender relations. There also needs to be more focus on the significance of research collaboration and an opening up of student affiliation at SANORD,” says Astri Andresen, who is now heading back to her full time job as a professor of history at UiB, where she is already involved in an international project looking at the history and rights of indigenous people, which just has been given funding by the Worldwide Universities Network (WUN) of which UiB is also a member institution.

Whereas this was Andresen’s last SANORD conference, it was only the beginning for Johannessen, now in her new capacity of the SANORD council’s chairperson.

“As the new leader I wish to follow up on the good work that has been done. After all, UiB was one of the universities that got SANORD established,” she says.

Having travelled extensively in Africa for the last 30 years, Johannessen is also full of praise for the organisers of the SANORD conference in Malawi.

“The conference was extremely well organised. Punctual and at functional premises. I want to praise the University of Malawi for how they conducted the conference,” Anne Christine Johannessen says before adding. “Very few of the meetings I have attended in Africa have been of such a high standard. I believe that the fact that universities in the south take upon themselves to organise meetings such as this in itself is a capacity building exercise.”

Also read this article from the opening of the SANORD conference 2013. 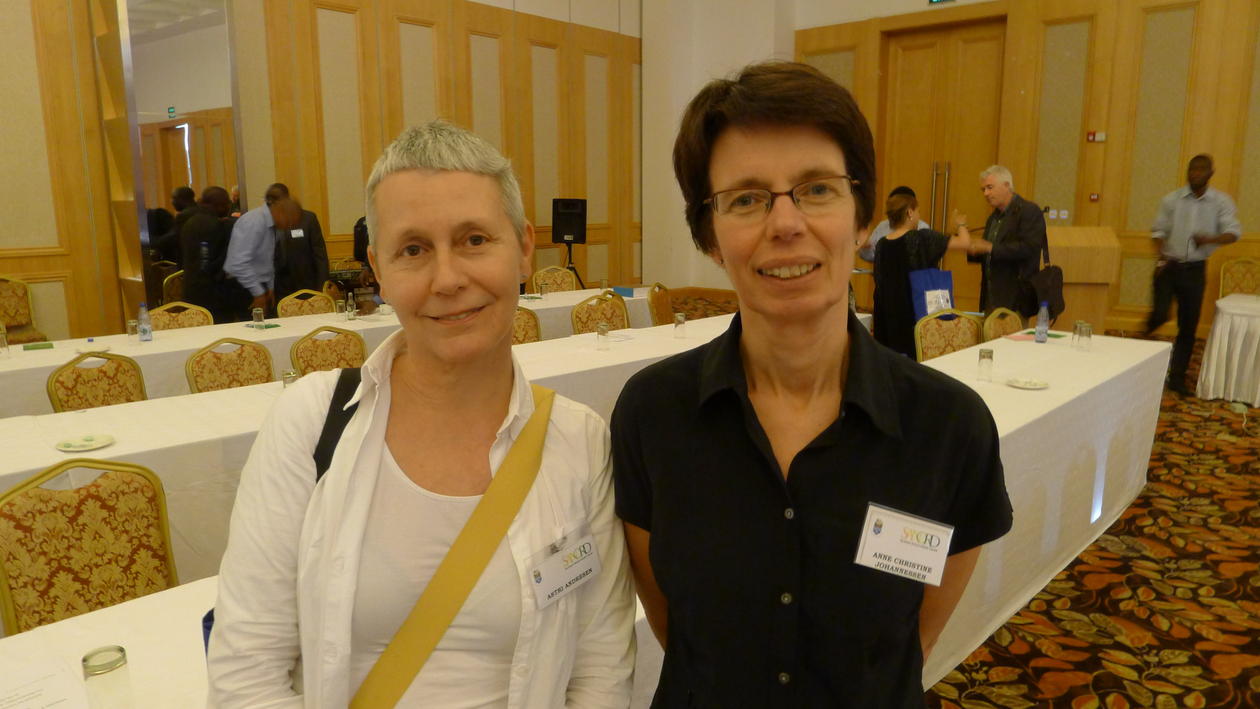 SANORD PAST AND PRESENT: Outgoing SANORD council chairperson Astri Andresen (left) with her successor Anne Christine Johannessen, both professors at the University of Bergen, pictured during the closing session of the SANORD conference 2013 in Malawi.
Photo:
Sverre Ole Drønen