A closer look at poverty in Southern Africa

CROP Director Alberto Cimadamore believes that SANORD can be an important partner in scientifically supporting the fight against poverty in the southern parts of Africa.

ANTI-POVERTY INITIATIVE: CROP and UiB Global are to arrange a workshop to discuss democratic developmental states in Southern Africa and the Nordic countries.
Photo:
Colourbox

Along with Professor Tor Halvorsen at UiB Global, Alberto Cimadamore and the Comparative Research Programme on Poverty (CROP) has made a proposal to the Southern African Nordic Centre (SANORD) about arranging a workshop to look at the role of the democratic developmental states in Southern African and Nordic countries.

“As an organisation we have had quite a successful experience with SANORD in the past. We arranged a workshop in Cape Town in November 2012,” says Cimadamore when we ask him about the new initiative. “The subject back then was on poverty in middle-income countries, which is a rising and relatively less studied problem.”

He explains that poverty research usually has been concentrated in small, low-income countries, but this has changed rapidly in the last few years.

“Currently most of the poverty is located in middle-income countries, like China, India, Brazil and Mexico,” says Cimadamore, who is a social scientist and has long worked on issues connected with poverty and development.

Cimadamore hopes to collect the discussions from the 2012 joint CROP-SANORD workshop in a book to be published later this year, and he has similar ambitions for a workshop to be held either in Mozambique or South Africa at the end of 2014 or in early 2015.

With the subject being development status, Cimadamore hopes that the participants of a new joint workshop can build on both the 2012 event and the discussions he encountered at the 2013 SANORD conference.

“When you participate in these kinds of networks and organisations, you both expand your activities and make them more effective. You reach places you otherwise wouldn’t reach,” he says before adding. “I hope this workshop will end up in a book that will have wide dissemination internationally.”

Not such a rosy picture

When Cimadamore visited the SANORD annual conference in Malawi in December 2013, he spoke about the Millennium Development Goals (MDGs) set by the United Nations.

Media reports, often based on spin created by the UN itself, have shown a rather rosy picture of poverty reductions worldwide. But Cimadamore is critical and spoke about this at the SANORD conference. The numbers he presented came as a surprise to many of the delegates.

“There is a lot of rhetoric that impedes an objective view of the reality of poverty,” Cimadamore says whilst questioning the often uncritical recycling in the media of the UN’s claim that 700 million people have been lifted out of poverty since the MDGs were set.

“The main problem with this alleged success is on the one hand that it hides the fact that China alone has lifted about 75 per cent of this number. On the other hand the UN does not point out that inequality has been rising consistently in the same time period. This is a structural trend, which in the long run conspires against any successful measure towards extreme poverty eradication and prevention,” the social scientist suggests.

Fighting the numbers distributed by major organisations such as the UN and other big players in global industries from aid to healthcare, is a major challenge for anyone questioning the status quo.

This is why Cimadamore believes that the CROP/UiB Global initiative to bring SANORD on-board to arrange a workshop within the next twelve months, is vital to somehow counterweight the powerful narratives and discourses that dominates the scene around the world.

“When I came to the SANORD conference, my first interest was to know more about SANORD as an organisation,” he says pointing out that for CROP, which is hosted by UiB and shares offices with UiB Global, it is important to expand their network in Southern Africa. “I believe that SANORD could be an extremely important partner for CROP cooperation in this region. So that was my goal and that is why I am glad that we are now hopefully embarking on a joint workshop to repeat the success from 2012.”

He points to the extensive network that both CROP and UiB Global already have built worldwide, including other parts of Africa, but believes that if an even stronger connection can be built with SANORD, of which the University of Bergen is a founding member, then the scientific contribution to the fight against poverty can be put more strongly on the agenda in the southern parts of Africa as well.

The important role of academia

He believes that, beyond the purely scientific arguments presented by researchers, such a collaboration will also serve to underline the moral issues that underpin the objective of eradicating extreme poverty.

“The Millennium Development Goal numbers lead to basic, ideological questions regarding the way that achievements are measured,” says Cimadamore, who believes that we need to set certain moral and ethical standards if we are to truly fight poverty. “We currently have in the world enough resources to solve the problem of extreme poverty. For political, social and moral reasons we at CROP believe that the international community can do much better.”

According to Cimadamore it is not yet clear what will replace the current MDGs when they expire in 2015. But whatever official targets are set as the next goals, he believes that the voices of CROP, UiB Global, SANORD and other academic organisations must be heard if a long-term solution to extreme poverty is to be found. And in this, he believes that a joint workshop between these organisations is a small, but potentially important, step in the right direction.

You can also read this report from the opening of the SANORD conference 2013, and another report summing up the conference with the current and the former vice-rector of internationalisation at UiB. The UiB Magazine also interviewed Alberto Cimadamore when CROP celebrated its twentieth anniversary in 2013. 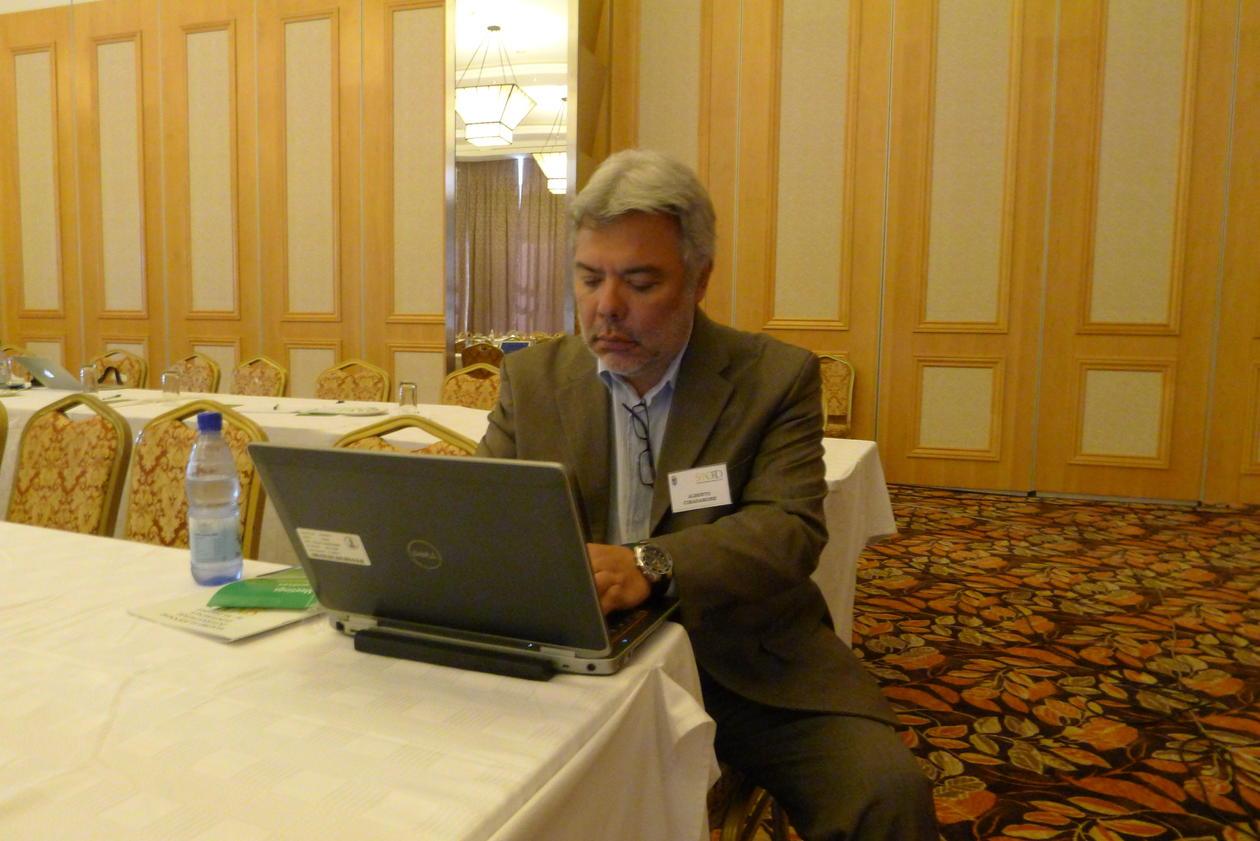 PREPARING TO SPEAK: Director Alberto Cimadamore of CROP, based at the University of Bergen, prepares a speech on poverty at the SANORD conference in Malawi’s capital Lilongwe in December 2013.
Photo:
Sverre Ole Drønen