How to get enough food for all?

FUTURE FOOD FAIRNESS: Professor Olivier De Schutter, the UN Special Rapporteur on the Right to Food, believes that both trade and government has failed, and that we instead need to use a bottom-up social innovation approach to create a sustainable and just food production for the future.
Photo:
Colourbox

“There is a realisation of many that the food system we have inherited, is not sustainable. There is now a consensus that it must be changed and that the reform of the food system is urgent,” Olivier De Schutter said in his key note speech “The Role of Governance in the Transition towards Sustainable Food Systems”, which opened the 2014 Bergen Summer Research School (BSRS).

De Schutter is the UN Special Rapporteur on the Right to Food and an academic specialising in economic, social and human rights law issues. His key note was the perfect continuation of last year’s BSRS, when the subject was “Food as a Global Development Challenge”. BSRS is a global summer school for PhDs from across disciplines.

At BSRS 2014 the subject is “Governance to Meet Global Development Challenges”, but, as De Schutter’s opening key note clearly demonstrated, food is a key issue if good global governance is to be achieved.

De Schutter went on to discuss the complexities of defining the debate on food-related issues. But however one looked at it, the human rights scholar believed that development issues cannot neglect three major dimensions:

“The link between sustainable diets and food systems is now internationally acknowledged,” he said. “The food production needs to be protective and respectful of biodiversity, culturally acceptable and economically accessible to all people. Today there is broad agreement that this is the key to reforming the food systems.”

De Schutter then went through the challenges in each of these three dimensions, using a multitude of charts and diagrams to underline that despite a rise in food production, there are still a billion people in the world who go hungry every day. And on top of that, there are another 2 billion people that suffer from one or other form of malnutrition. The perversity of this is underlined by the 1.6 billion people in the world suffering from overweight or obesity, and thus more susceptible for diabetes or heart disease. Thus underlining that the food distribution system is also a global public health issue.

“The way the food production has evolved over the past 60 years, local farmers have not seen an increase in their income. Instead there has been an increase in social differences, where all from tomato-pickers in Florida to small-scale farmers have not benefitted from how the food system has developed,” De Schutter argued. “The requirements of social equity need to change, at both ends of the food chain.”

The human rights law scholar took aim at the mantra of increased trade as the solution to the world’s food ills.

“This has created a toxic cycle of hunger. To understand how this has developed, we need to explain the mechanisms at work,” he said. “Over the past 60 years, more and more support has gone to export-led agriculture. More and more pressure has been put on governments to support the production of crops for export, rather than supporting small-scale family farms to produce food for local needs.”

According to De Schutter, this has led to rapid urbanisation and growth in slums areas, which next has led to pressure on governments to supply growing urban populations with cheap food. A vicious cycle leading to increased imports of cheap food in many developing countries, whilst undermining the demand for local produce.

“Such a food system is not reducing hunger, despite increasing levels of production, but has instead contributed to inequality in rural areas,” he said.

He also argued that the food system as it is today, has an extremely bad impact on the environment, as the focus in on a few crops, and that this leads to a loss of biodiversity; the sum of which also has a knock-on effect on climate change, he pointed out whilst displaying numbers from the latest UN Intergovernmental Panel on Climate Change (IPCC) assessment report, published in September 2013.

Moving away from a top-down approach

However, the human rights law scholar was also highly critical of the top-down approach that is seen in government and public offices, and that also far too often fails to deliver on its good intentions.

His solution for the combined challenges in public health, poverty, the environment and a fairer food production is to build new alliances. Rather than relying on the accepted model of farm produce being heavily regulated and subsides for growth and the food then distributed via multinational corporations, he suggests a more direct route from farmer to consumer.

“Social innovations are a tool in the transition to a sustainable food system,” De Schutter argued, before pointing out that this not is found in the big agendas and reports of the United Nations and other intergovernmental organisations. He mentioned social movements, such as the international peasant’s movement La Via Campesina, as pioneers of a new way of thinking.

He also suggested that we link social innovation with a move to food sovereignty, such as the right of every country to define it own food policy, in participation with its native population. 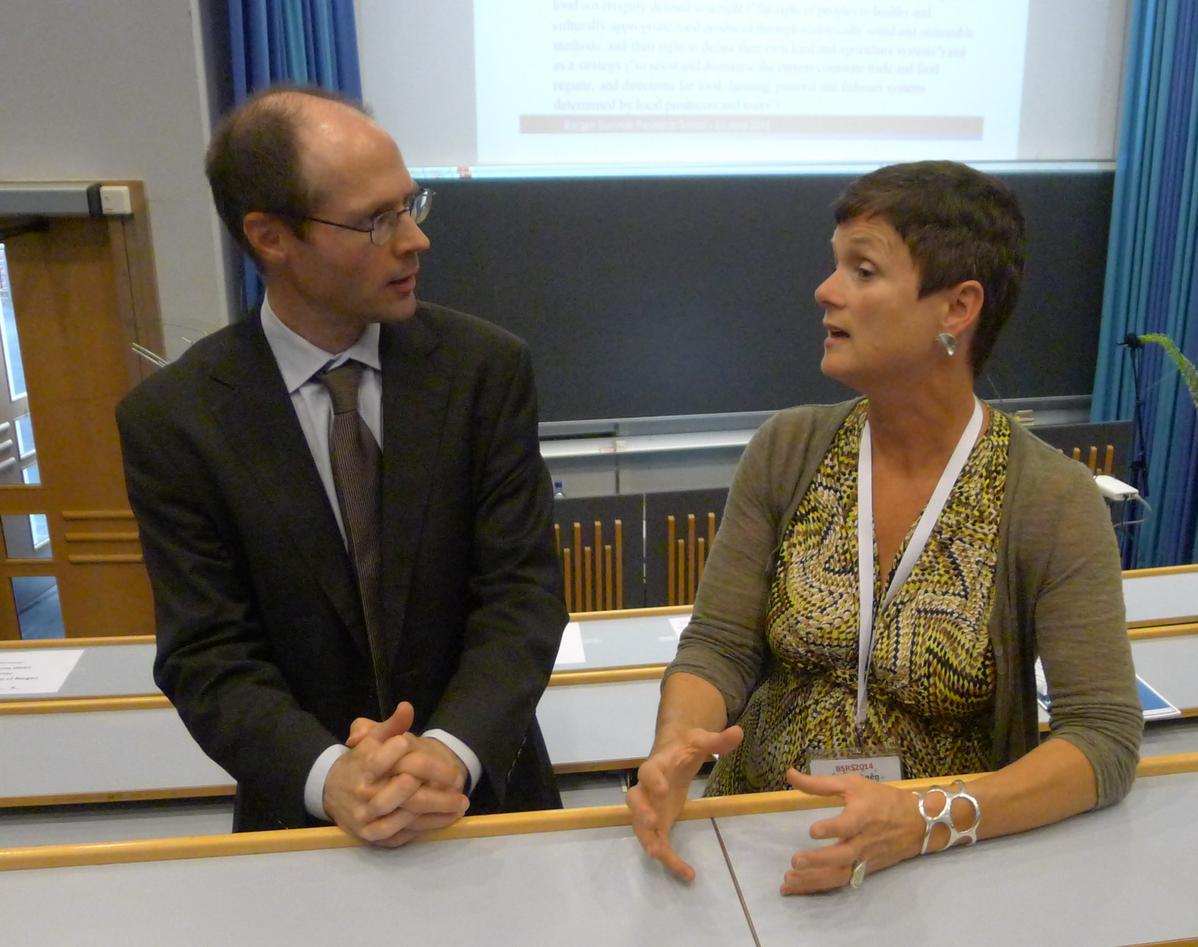 THE DEBATE CONTINUED AFTER THE KEYNOTE: The UN Special Rapporteur on the Right to Food, Olivier De Schutter, in lively discussion with Professor Siri Gloppen of UiB’s Department of Comparative Politics.
Photo:
Sverre Ole Drønen